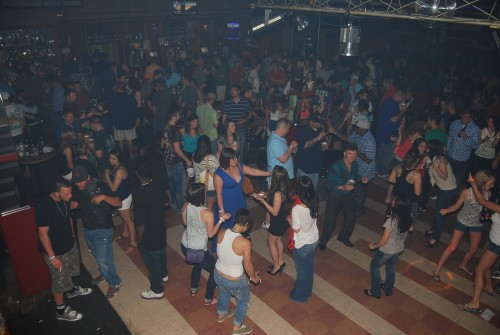 Make no mistake about it: People go to Last Call to party.

The bar’s atmosphere is not conducive to networking or enjoying original music; rather it’s shooting hard liquor and dancing when there’s no one in proximity. It’s a place where baseball caps are color coordinated with shirts and shorts, one where the crowd follows suit en masse when someone breaks the ice on the dance floor amid a persistent thump of the bass and a frenzied, vibrant light show.

The Thibodaux nightclub is open from 9 p.m. to 2 a.m., three times a week, Thursday night through Sunday morning. Each night has developed its own reputation in the form of theme and drink specials.

The first night is devoted to Nicholls State University’s Greeks, who pay no cover and are offered $4 beer or mixed-drink buckets, $1 Greek Bomb shots and free draft beer until 11 p.m. Friday ushers in Ladies Night, when females 21 and older get in free or pay $5 for five drinks. Saturday is Customer Appreciation, which means mixed drinks cost $2, Miller High Life is $1 and Patron shots are two-for-one.

On Thursdays and Fridays, the bar typically hosts DJ Devil on Ice and DJ Tripp, respectively. Both are Nicholls alumni. On Saturdays, the bar varies between popular cover bands and “top-notch” deejays.

“On Saturdays, when booking entertainment we try to book only the best the area has to offer,” says Derek Landry, a partner at Last Call for four years. “If we don’t think it’s the best out there, neither will our customers and we can’t have that.”

The gateway to liquor is largely unimpeded. No stools accompany the nearly 50-feet-long service bar. Although a few patrons still use the surface to prop an elbow, there’s no need for those looking to buy a beverage to contort around leisurely drinkers to get one of four bartenders’ attention.

The stools are elsewhere, four to each of the many round tables surrounding the tiled dance floor. People sit throughout the night, even as the rush of patrons pays the cover charge and begins to dance.

The stationary crowd struggles to talk over the music, leaning close to one another’s face to get points across while billows of cigarette smoke matriculate throughout the club.

Deejays consume most of the performers’ budget. A never-ceasing blend of hip-hop and techno is the norm, and the high-ceilinged building makes for great acoustics. The bass doesn’t stop beating, yet the lyrics blare through as the performer looks on from a balcony.

Live original music at Last Call is rare. When a band is brought in, the group is expected to perform covers to better relate with the guzzling patrons who want to dance to what they know. Mostly, through, it’s hip-hop, techno and the ensuing jubilation.

The people here smile. They beam. They laugh and shout as eccentric strobes of a bright red and green light display – a frenetic series of dots realizing a central point before exploding and repeating – bounces from shoulder blade to cheek to floor.

“I come here because there’s a variety of people. You can see everyone,” Edgar Matherne, 29, of Houma, says after he and his male cohort each down a Jager Bomb and begin to sip a Miller Lite. Matherne says he’s riding in a taxicab on this night. After a beat or two, he points at a girl wearing a yellow shirt.

Two televisions and a projection screen tuned to sporting events are rarely glanced upon, and video poker machines in the corner go untouched under the black lights at Last Call.

Matherne is correct about the variety of people. The age bracket ranges from 18 to late-30s, at least. The music and atmosphere beckons the crowd, and a dress code prevents unwanted behavior by setting standards.

Backward hats are turned around, plain T-shirts without a logo are not allowed and men who wear jean shorts are frowned upon – an older man can get away with denim at the knees, says Jared Myles, who has managed the bar for nearly two years.

Most dress rules are in place to prevent bagginess, sloppiness or the revelation of unflattering body parts, such as bare armpits beneath a basketball jersey, which are also not allowed. The guidelines, posted near the club’s entrance, are meant to coincide with the establishment’s mission of “keeping a quality crowd,” according to the bar’s manager.

It’s not often that the party hiccups, perhaps because several bouncers are stationed at the doors and around the dance floor, soaking in the music and eyeballing the nonstop action.

Patrons of Last Call populate the dance floor. The Thibodaux nightclub, which has a capacity of 375, lives up to its party reputation with thumping bass and bright lights coercing the crowd into dancing.