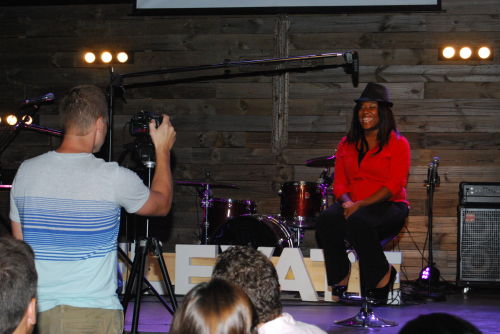 Plucking her acoustic guitar, Hannah Guidry was singing the Eagles’ “Desperado” during Center Stage auditions when the judges told the 13-year-old to stop.

“The judges actually did something weird to me,” Hannah recalled. “So I was singing the song, and they stopped me right before I had this high part. They told me to raise my capo up, which makes the song higher. I wasn’t prepared to do that, so whenever I came to the note – I’m an alto singer and actually that’s the first time I’ve ever belted a note – so whenever I got to the note, I sang, and it just came out. Ever since thing I’ve been belting notes for some reason. It’s awesome.”

Though she hadn’t yet officially submitted her tracks of choice for the live singing competition, Hannah said she was leaning heavily toward reprising “Desperado,” and would certainly incorporate her newfound talent.

After Hannah and more than 100 other hopefuls auditioned at Southland Mall last month, event coordinator and founder Ann Duplantis’ excitement drove her to IHOP at midnight for a meeting with judges.

“I could not make a decision. We had some remarkable talent walk in,” Duplantis said, though trimming the field to the prescribed 20 slots isn’t a problem unique to this year.

Twenty-two contestants were ultimately chosen to perform Aug. 24 at the sixth Center Stage Singing Competition, held at the Houma-Terrebonne Civic Center. They range in age from 11 to 55.

Each sings a unique song no longer than three and a half minutes, and five are tabbed to sing a second tune as finalists.

Among the judges this year is Center Stage alum Karen Gonzalez, who played Bologna Barb in the a cappella-oriented comedy “Pitch Perfect.” Gonzalez is also slated to sign autographs for attendees beginning an hour before the show.

This is in addition to the notoriety and performance opportunities awaiting the Center Stage champion. Event coordinators in the parish and region frequently call Duplantis to book the winner. Last year’s champion J’Leigh Chauvin performed a set at Best of the Bayou, for example.

Eighteen-year-old Whitney Adams is set to perform at Center Stage for the third time. “It’s exciting, it really is, to see all those people in front of you.”

The Larose native, who describes her voice as a Sara Evans-Shania Twain hybrid, said her experience has taught her to be “sassy” while performing.

“I did the variety show at South Lafourche, and that made me come out of my shell a lot, because I had to be really silly,” Adams said. “Now, this year, I know I’m able to bring it.”

Zach Dufrene said he expects that performing at the civic center will be “just a positive experience, all around. I think it’s going to be good participating and competing with talented folks who have a passion for music.”

Dufrene, 28, describes his voice as a baritone sprinkled with soul. He bounces from various genres and performed “Easy Like a Sunday Morning” for the auditioning judges. His mother’s urging convinced him to try out. “It was kind of a last-minute decision (to audition),” he said.

Dajeane Jones plans to sing Tamia’s “Give Me You.” She said she has sung for friends and family members since she was 5 and that her 3-year-old son tries to replicate her voice. “He sings just like his momma, so I need to become something for my son.”

The 23-year-old Houma native said her voice can adapt to various levels, depending on her mood. On a daily basis she dons her headphones, grabs a basketball and walks around her neighborhood, singing in isolation. Now she’s preparing to put on a show.

“I’m about to make the whole house rock,” Jones said.

DaJeane Jones, 23, records her introductory video for the Center Stage Singing Competition. Jones, filmed here by Josh Bourgeois, is one of 22 contestants vying to be champion of the annual Houma event.