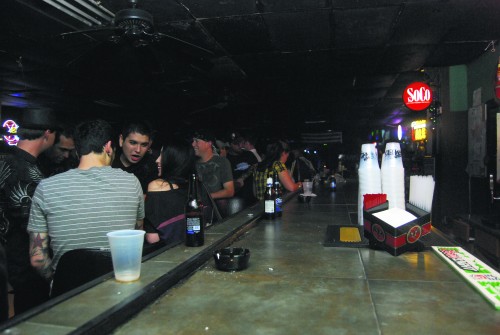 It would be inappropriate to begin any description about Hard Racks without first acknowledging its size. It is very large – large enough to hold up to 700 people, according to the owner, and large enough to operate as two separate bars.

Lenny Swiderski II, the 32-year-old owner of Hard Racks, said he tries to cast a wide net when determining the establishment’s appeal. The primary goal, he added, is to run a successful bar that is not hampered with a troublesome reputation.

The North Hollywood Road (or more accurately, Neptune Court) barroom is a place welcoming of varied ages and interests.

The crowd segregates itself by comforts: One segment queues behind the establishment’s six billiards tables while the other sings along with cover band du-jour: the Chee Weez, Vintage and Travis Matte highlighted February at Hard Racks.

The most-ordered well beverage is either Crown Royal or vodka with Red Bull, according to one-year bartender Victoria LeBlanc. Bud Light is the patrons’ usual beer of choice, she says while Vintage, a regional classical rock cover band, pleases a crowd of close to 100.

Long-sleeved button-down shirts, short sleeves with a collar or T-shirts dangling over blue jeans are the attire most males adhere. The females adhered to casual dress and most wore blue jeans and trendy tops beneath jackets.

Although the signage outside indicates the taproom is a sports bar, only two small televisions on either side of the liquor display are free to show sports. Another television hangs above video poker machines. On the night Vintage performed, the bar’s projection screen inexplicably played a muted showing of “The Hangover.”

Swiderski said the goal isn’t to draw customers in with sports on TV: His target customer doesn’t go to the barroom to watch sports.

Rather, the “sports bar” designation comes with the patrons’ opportunity to participate: the billiards room, the foosball table (which is tucked away as Vintage plays), dartboards and an outdoor volleyball court and horseshoe pits, both of which could be installed as early as the summer.

“I’m going to convert it to a sports bar that people can relate to in Houma,” Swiderski said. “I’ve got all this room out there, so every week I’m thinking of a new idea and trying to grow that into something the community wants.”

The bar owner splits the typical six-day week in half when guiding his entertainment. Deejays are penciled in for Mondays, Wednesdays and Fridays, he said, and rock-and-roll fills in Tuesdays, Thursdays and Saturdays.

It would be simplistic to focus too much on that guide, however. A jumbo calendar hangs from a wall and details nightly events besides concerts, such as comedy shows, open mic nights, drink specials, bikini contests and an oil wrestling night. There’s hardly an empty date.

“We try to do something different over here that nobody else is offering,” Swiderski said of the variety. “Maybe it’s too much, but you never can tell. You don’t want to underdo it.”

Swiderski, who was born in Buffalo, N.Y., moved to Houma when he was 6 months old. His parents divorced when he was 4, and he moved back to New York with his mother. He spent every summer with his father, until he was 16, when he moved to the Bayou Region permanently; he would later graduate from Terrebonne High School.

He joined the U.S. Military and said he served in the Navy’s Special Forces. In addition to running Hard Racks, he’s a commercial diver.

“We had Club Med. They said it couldn’t be turned into a successful nightclub. It turned into the crowd that I didn’t want it to, but we were successful.

“Over here, we have a good reputation for not having any fights,” Swiderski said. “Women feel comfortable over here.”

People chat near the bar at Hard Racks, a west Houma taproom that offers a variety of events each night of the week. The size of the barroom allows patrons to play pool or video poker, shoot darts or dance while local and regional bands perform.