Want to drive a Ferrari? 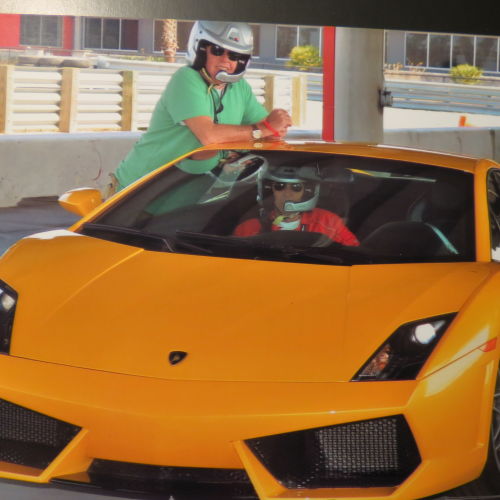 I’ve dreamed of driving – though not outright owning – a high-performance supercar, but never thought it would happen.

That all changed last month at the NOLA Motorsports Park, where the wheel of a precision machine capable of hitting 100 mph in 6.9 seconds awaited my eager but nervous hands. It was part of a promotional program for Exotic Driving Experience, a company that allows mere mortals like myself to be Speed Racer for a few thrilling minutes, driving cars like the yellow Lamborghini I was to handle, as well as high-performance Ferraris, Porches, Aston Martins and Audis, on a real track, with a coach in the passenger seat.

Writers got to do it for free at the media day event.

The same experience normally costs around $300, not counting options like take-home video, photos and frames for them, as well as caps and other swag. My bosses are not about to pay $300 for me to drive a car valued at many years of my salary, so the invitation was accepted.

First a word about the venue.

The 700-plus acre, $60 million park was the brainchild of Dr. Laney Chouest, of the workboat Chouests, who initially wanted a place to play with his own private toys, according to track spokesman Wes Ratcliff.

A big part of the park’s business is a kart racing track, capable of hosting world-class small kart tournaments but open to anyone who wants to plunk down $15 on a Monday or $20 to $25 on other days for the thrill of driving one.

Protective gear, including helmets, is included. The track has been developing kart leagues and the concept is catching on.

The Exotic Driving Experience, a kind of traveling road show available at other locations including tracks like Daytona and Charlotte, will next be open to the public at NOLA April 25 through 27, then May 24 through 26, and at other dates throughout the year.

I will admit that I am not a big racer kind of guy. Friends have often chided me for the caution I exhibit on the road, though I try to tell them I can handle a car hammer down with the best of them if I have a reason to move fast.

During the brief tutorial myself and other participants were given in a park classroom, instructors said they would see to it that we traveled as fast as possible and as safely as possible.

I myself would have been happy with a quick moderate jog and a chance to show off my parallel parking skills, but that wasn’t to be.

After walking to the pit area of the track I first laid eyes on my vehicle, and it was love at first sight.

The Lamborghini Gallardo LP560-4 was named after a breed of fighting bull and retails for about $198,000, which itself is intimidating. Nobody has ever trusted me with anything that expensive to potentially damage. The midship motor, which can be seen through a little window mounted on the body, is rated at somewhere around 550 horsepower.

After being fitted with my silver helmet, I climbed into – or more accurately squeezed and fell into – the new-car smelling interior and placed my hands on the wheel.

John Crosby, my red-shirted, unflappable coach, fiddled with some electronic devices that would help assure the safety of both of us, including a gadget that allows him to restrict the horsepower, which he employed as he does in all cases during the first thousand feet or so of the trip, to make sure that if my goal was self-destruction I would be thwarted.

It’s a cliché, but yes, the engine purred once I turned the key on John’s command. His soft drawl came in loud and clear through the speaker in my helmet.

“You ready?” he asked. I responded in the affirmative, and after stepping on the accelerator – ever so gingerly – we were moving.

The steering was amazing. I have never been in a car so responsive to touch, one that actually goes where you want it to, so well and so on point that it is at first incomprehensible.

The brakes, I figured out after an initial check, felt like they would stop a locomotive dead in its tracks.

I have driven cars and trucks and anything else people have allowed me to for 40 years now. Old habits die hard. My one-handed steering technique, flashy as it might be while juggling a coffee cup and a cigarette on I-10, wasn’t going to cut the mustard.

“Hands at 9 and 3,” my sports car sherpa said, with polite firmness.

As the car moved forward out of the pit lane I experienced my first conflict between highway and track driving. I wasn’t supposed to use the mirrors. I had John to tell me if other cars were coming up behind, and he intended for me to employ the resource.

Like a plane waiting for the green light from air traffic control, we waited for the word from track control, stopped at the main track entrance out of the pit.

The car did not seem to be meeting points on the track so much as the track, its pylons and its red-and-white turn markings appeared to be coming at the windshield, as I took turns faster than I ever had, careful to come off the brakes once on the curves themselves.

My first time on the straightaway clocked out at about 80 mph. My vision told me it was that fast because of the rate at which the track came at me, but the feeling – what it would be like with eyes closed – was of coasting in clouds.

The whining up of the stock engine was the only other indication that we were going so fast.

Turn after turn I got a better feel for the car, and a better feel for myself. Confidence was building as the clock ticked, and while I was pleased that John never got nervous, a devilish part of me wished I was cocky or foolhardy enough to at least make him appear nervous.

It was on the fifth lap that I really felt I knew what I could do with the car, and I entered a turn at over 50 mph – about 15 mph faster than I had on prior go-rounds. There was a sense of exhilaration in my chest, a feeling that I was finally getting it. Maybe my career choices had been wrong. Maybe I could still one day be a Mario Andretti. Maybe ….

Maybe I can not brake so much entering this turn, I thought, and maybe I could floor it going straight immediately after, and with new faith in myself and the machine that’s just what happened.

On the straightaway the car took to my touch like a nimble and spirited stallion, moving ahead nonstop and moving fast. No speedometer on this trip so I would have to wait to see what I did. Another round of negotiating the curves and we were pulling into the pit lane again, my experience done, my heart beating slightly fast, but in a good way.

I shook John’s hand and wriggled out of the car.

Later on I checked my stats, and reviewed the video.

My fastest time, that last run on the straightaway, was 100 mph.

“Is that lame?” I asked Scott Foremaster, NOLA’s track operations supervisor and instructor.

Maybe he was trying to make me feel good. Maybe he was straight-up being honest. I’d like to think so. But the experience, regardless, is one I’ll keep with me forever. Excuse me, I’m going to look at my video again. Then I’m taking a ride in my 1993 Cherokee.