TPR Basketball registration is this month 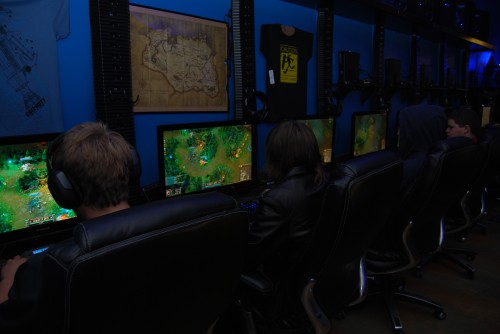 Many adults can remember their lives juxtaposed against computers transforming from dial-up Internet on a box-styled desktop to the high-speed Web interface on flat-screen monitors, not to mention handheld devices.

Samantha Diehl is one such person. She and her siblings “grew up in front of computers.” Technology is ingrained in her psyche, and although she is just beginning to dive into the type of gaming common in the Tri-parish area, her background is an asset as she manages a local video-game facility for her parents.

uGam3 (You Game) officially opened with a ribbon cutting at the end of June. Six months later, the West Park facility that shares a plaza with Pizza Hut harbors entertainment wants as well as social interaction.

“We’ve always wanted to give back to the community,” says Diehl, who oversees a wired facility that attracts like-minded people and has developed into a community all its own.

“Why would I watch television when I can play Halo?” customer Rhett Authement asks those lounging at uGam3 while he evades bullets in a computer beta test of Call of Duty: Black Ops II.

“Why would you want to play Halo when you can play video games?” Tim Ory retorts, ending an exchange indicative of a 30-minute conversation during and following Authement’s gaming. Ory and two others are looking over his shoulder when they aren’t stealing glances at one another during the discussion.

Their topics bleed into one another, all laced with truth and one-upmanship, ranging from virginity and existential theories to video-game publishers producing something new or adding a roman numeral behind an existing franchise.

uGam3 is more than a gaming center. A daily customer whose pizza box is rests on a table behind him can attest to that. So, too, can the 40-or-so weekly participants in the Magic: The Gathering tournament. It’s a community, 68 members strong, that understands itself well enough to be comfortable and truthful in dialogue. Cutting remarks frequently succeed those of self-abasement.

The facility’s community-like atmosphere is amplified by the proximity of pizza – no delivery fee needed. uGam3 also sells energy drinks and houses a soda vending machine, providing the fuel needed to make it through tournaments, lock-ins and late-night gaming sessions.

Because while uGam3 is scheduled to close at 10 p.m. on school nights and 2 a.m. on weekends, it’s rare that a gamer is asked to leave.

Houma travelers may notice on Friday nights overflow cars in the center’s’ plaza, one of the reasons the need for a new base is legitimate. The cause for excitement is the weekly Magic card game tournament.

Roughly 40 people attend each week the six-session head-to-head tournament. The roster includes the state champion Jobey LeBlanc and a former champion, as well. The players, who formerly competed at Books-A-Million, say uGam3 is a more game-oriented environment that facilitates a casual competitiveness.

Diehl says ownership is considering expansion, which would entail the purchase of a new facility and, possibly, retro gaming platforms a la Sega Genesis and Nintendo 64. The Sega Dreamcast remains unmentioned.

For now, however, most uGam3 clients stick to one of the center’s 18 custom-made computers. Diehl’s boyfriend Joseph Breaux built the computers to his specifications. The towers emit a blue glow in an otherwise dark room while they rest on a shelf above.

Many console games, most notably the Call of Duty, Battlefield and Skyrim series, are available on the computer.

One game that has started to enter the mainstream computer gaming community (it rivals World of Warcraft in subscribers) three years after its release, is League of Legends. Two teams combat one another for supremacy in an online battle arena with strategy and role-playing game elements.

uGam3 is hosting a League of Legends tournament Dec. 8, one that is sanctioned by publisher Riot Games. At least eight teams, including one from Alexandria, are committed to pay the $10/person entry fee, as are multiple free-agent individuals.

For all the pizza, energy drink and acne jokes in the queue, consider weeding out the ones that generalize based on perception.

“I feel like gamers get a bad rep,” says Diehl, who adds that clientele ranges from 10-year-olds to the adults near retirement age, some of whom come just to dabble on Facebook. uGam3 has hosted a bachelor party, and sometimes full families take a trip to the center for a day indoors, with the occasional parents sampling games for the first time.

According to figures released by the Entertainment Software Rating Board, 67 percent of United States households play video games, the average gamer is 34 years old and 40 percent of all gamers are female.

The industry collected $10.5 billion in revenue in 2009, according to a global market research study released by the Entertainment Software Association.

uGam3 charges a standard $6 per hour rate for non-VIP members and $5 per hour for VIP members. The center also offers bulk rates, ranging from five to 25 hours, which exponentially benefit its VIP clientele. For example, five hours cost $20 or $28, while 25 hours cost $50 or $110. A VIP membership costs $50 per year.

The facility also offers tutoring and computer literacy and genealogy classes with sessions starting at $25.

A team of four battles online opponents in League of Legends at uGam3, a gaming gathering spot in Houma.

Daniel Christen and Wesley Barrera play Magic: The Gathering during a weekly tournament at Houma’s uGam3.