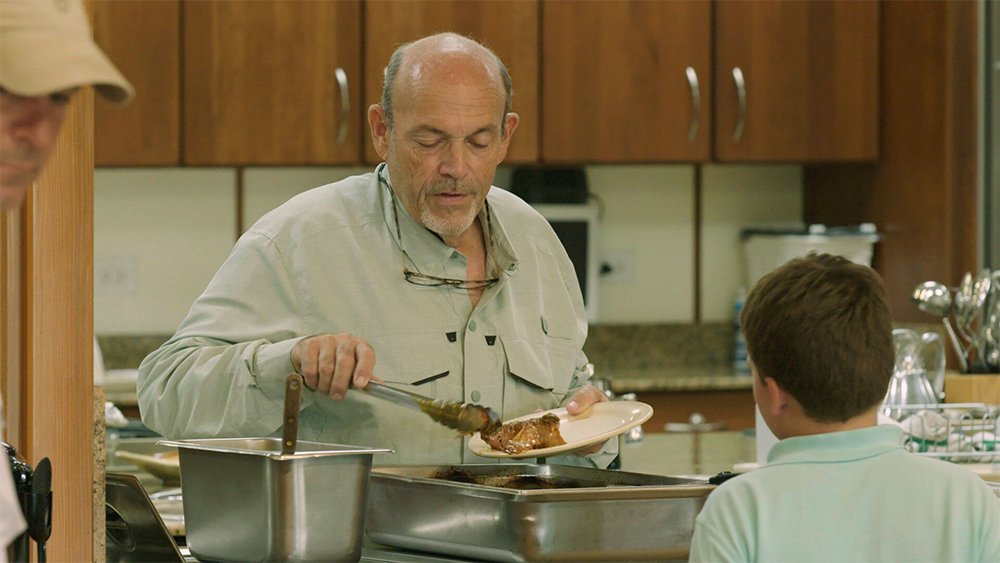 First, there’s a slight give in the natural pork casing, a puckering on either side of the original tooth-marks. Then, a spicy-tangy-salty mixture of meat, rice, onions, and seasoning ekes out of one end – sometimes both ends – filling the eater’s mouth with a combination of warmth, comfort, and Cajun spice. It’s boudin.

Cajun boudin can date back to the French Acadian settlers who moved to Louisiana over two hundred years ago—they learned sausage-making procedures from German immigrants in the region and combined the local cash crop in the mixture: rice. There are two types of traditional Cajun pork boudin – white and red (or blood). The red or boudin noir follows essentially the same recipe as the white, but incorporates fresh pork blood into the mix. Today, the white version is most commonly found but red is the original type—more popular back in the day when families raised and butchered their hogs at boucheries.

Traditionally made with pork, these sausages were a way to use up every undesirable part of the animal: liver, head, kidney, heart, gizzard—all stuffed in the intestine. Now, cooks throughout the state and elsewhere sometimes look to branch out from the original pork-sausage links—incorporating other ingredients like chicken, crawfish, alligator, and shrimp. Making boudin used to be a community affair, known as a “boucherie,” where Cajun families and neighbors would come together to butcher hogs for the winter and needed to use up every little bit of the animal. Historically, boucheries were overnight or multi-day community events that included food, drink, storytelling, zydeco music, dancing, and celebration to offset the hard work. Today, boudin without blood, or “white boudin,” is the more common type, found in restaurants, gas stations, grocery stores, and convenience shops and elsewhere in Benny Cenac’s hometown of Houma and throughout Southern Louisiana.

Benny Cenac, Houma-area businessman behind Cenac Marine and Main Ironworks, loves boudin. For many, boudin is the essential Cajun fast food, quickly filling the hunger void at any time of the day or night. Cenac grew up eating the Cajun specialty with his family and friends—buying hot links at the local meat shop for sustenance on long, hot days on the winding bayou, spent either working his family’s maritime business or fishing the Atchafalaya Basin’s bounty. Cenac even turns to boudin to fill him up for a long day caring for the sprawling acres and myriad of animals that reside on his Golden Ranch Farms, the largest privately-owned refuge in the state. Regional variations exist from parish to parish, store to store, and family to family but the best links are always made in-house. Like other Cajuns, Benny Cenac enjoys the friendly rivalries between local boudin makers and looks forward to modern-renditions of the classic dish: deep-fried boudin balls, beignets stuffed with boudin, and boudin burritos have recently been introduced. But most of all—Cenac looks forward to the annual Scott Boudin Festival—a springtime weekend celebration in Louisiana’s designated ‘Boudin Capital’.

Since 2012 after then-Mayor Purvis Morrison lobbied the Louisiana State Legislature to become the “Boudin Capital of the World,” the railroad town of Scott adopted a new motto: “Where the West Begins and the Boudin Never Ends.” The heritage of Southern Louisiana is showcased all weekend at the family-friendly Scott Boudin Festival, but of course, the Cajun delicacy is always front and center in the festivities. Food stalls line the downtown area selling local specialties like crackling, fried chicken, fried seafood, red beans and rice and of course—boudin. Local artisans sell their works and put on craft events for festivalgoers and their young children. Zydeco dance competitions and performances by local musicians round out the entertainment at the authentic community celebration.  At the time of its “Capital” designation, Scott sold over 1.5 million pounds of boudin each year, but seven years later, the small town has steadily increased its supply to over 2.2 million pounds of the Cajun sausage. There are six primary boudin vendors in Scott, LA: Don’s Specialty Meats, Best Stop Cajun Grocery, Billy’s Boudin, Nunu’s Grocery, Romero’s Grocery, and Menard’s Cajun Grocery—and one should visit them all to taste the different variations and find their favorites.

Benny Cenac suggests Louisiana tourists and boudin-lovers look to the official Cajun Boudin Trail pinpointing the location of most every stop along the road selling the delicacy. Dr. Robert Carriker, historian at the University of Louisiana Lafayette, wrote a book on Cajun boudin and since created a trail of all the spicy spots peppered throughout South Louisiana, even extending to Texas and Mississippi.  Throughout the area defined as Acadiana or Cajun Country, of which Cenac’s Houma hometown resides, boudin is ubiquitous: signs and banners call for visitors to stop and grab a link of HOT BOUDIN, where a shop-worker typically pulls a link from a steamer or smoker, weighs it, wraps it in butcher paper, and usually hands it over with napkins or a paper towel to be eaten right on the spot. Locals-on-the-go or homesick Cajuns frequently fill ice chests with links from their favorite boudin spots to bring to unfamiliar or wishful friends outside of the state. Locals and boudin-obsessed debate for hours on the crispness of the casing, rice to meat ratio, eating method, appropriate spice, and best texture.

While Benny Cenac can think of many ‘favorite’ Cajun dishes (gumbo, jambalaya, sac-au-lait, etc…), it’s boudin that embodies a culture of people born with rice flowing through their veins, punctuated by French and German influences. No matter if you like yours steamed, smoked, baked, or within another dish—boudin is an important link to the past, present, and future of Cajun culture. 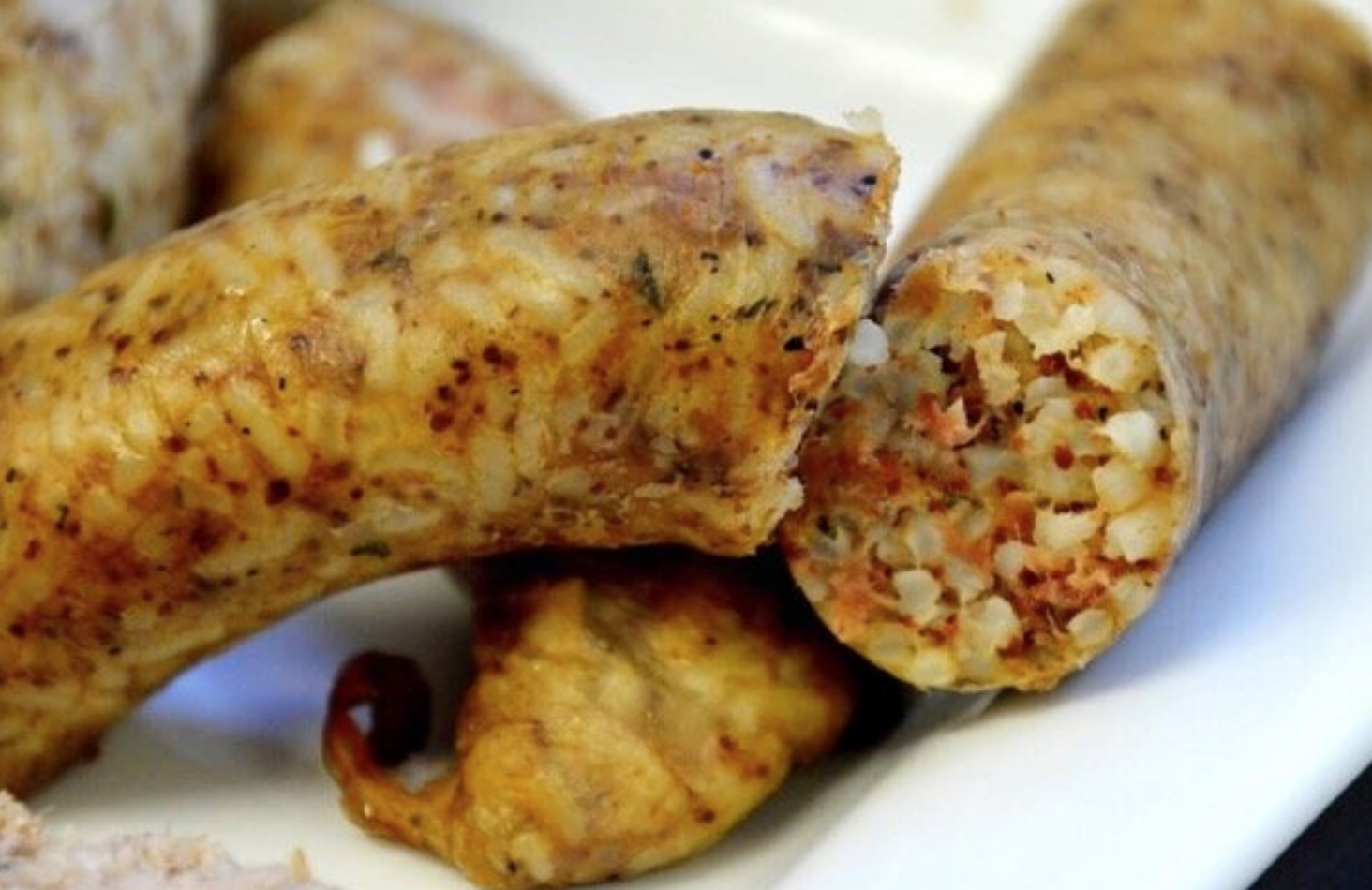