Juneteenth Celebration to take place in Houma this Friday

Returning to the Field: E.D. White and Thibodaux 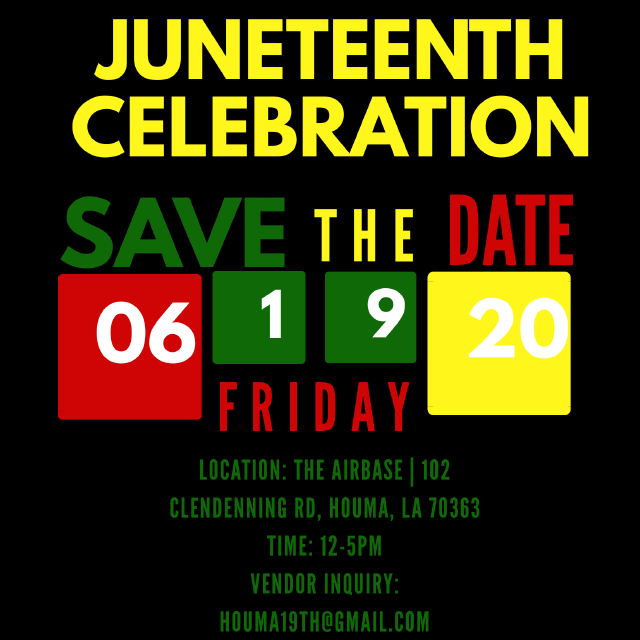 Organizers are welcoming all to enjoy a day full of food, music and more at Air Base Park this Friday (June 19) from 12-5 p.m. to celebrate Juneteenth.

Juneteenth, also known as “Freedom Day,” is a holiday commemorating the end of slavery in the United States. Although the Emancipation Proclamation was issued two and a half years before, on June 19, 1865, Union general Gordon Granger announced the end of the Civil War and the abolition of slavery to enslaved African Americans in Texas — the last state to have a stronghold on slavery. Before then, Texas didn’t have an abundance of Union troops to enforce the proclamation.

“It’s important to celebrate because this is our actual holiday in America that we were actually free,” said Derra Howard, one of the event’s organizers.

“We have the 4th of July when the U.S. became independent, but we were still slaves…It should be celebrated the same as the 4th of July,” said Taylor Holliday, who is also coordinating the celebration.

Both organizers say all are welcome to the family event, which will highlight black history, culture and black-owned businesses.

Barbecue has been donated for the celebration, and guests can also enjoy free snowballs from 2-3 p.m. — distributed by Brooke’s Sno-World, sponsored by C & K 2 Trucking LLC.

Attendees can also check out products by Line By Daye and T. Sharall Designs, among other vendors, who will set up shops on festival grounds. Any other vendors interested in displaying their work for free at the event can email houma19th@gmail.com.

DJ B Smooth will provide the day’s musical entertainment.

Howard said they are planning to make this an annual event.

“I think now more than anything,” she added, “with at all the police brutality and everything that’s going on, we as black people need to celebrate for ourselves and just come together as a community.”

NOTE: Holliday said more tables and chairs are needed for the event. Anyone who is willing to let them borrow or rent the items can call her at 225 – 937 – 6891.