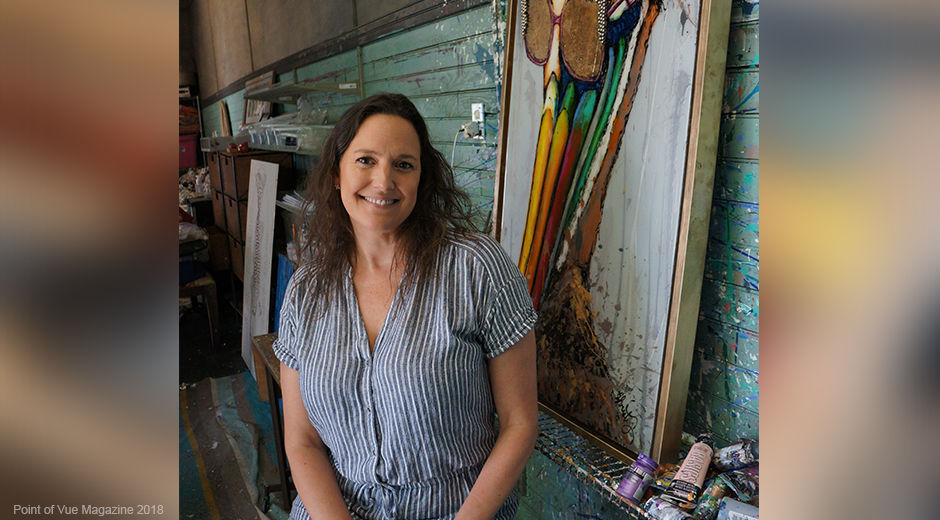 There is no question that the fine art by well-accomplished artist Christy Boutte represents South Louisiana culture. Her paintings show her expression, and impressions on the culture’s icons like tarpons, crawfish, oysters, crabs, etc., as shown in her works “Terrific Tarpon,” “House Wines on the Horizon,” “Ms. Fendi the Blue Crab” and more. She wants everyone to be “happy” and “feel proud” of their culture when they view her art.

The communities in South Louisiana often have to adapt when faced with adversity. Rather it be storms, oil spills, coastal erosion or an up-and-down economy, South Louisianans often have to adjust their way of life to persevere through tough times. Like them, Christy contains a strong will and ability to adapt that’s carried her through the loss of hearing, changing of schools (from specialized to normal), a male-driven art world and more.

Due to spinal meningitis, Christy became profoundly deaf at 13 months old. A misdiagnosis of the illness nearly costed her to lose her life.

At three years old, her parents moved their family to New Orleans so Christy could attend a specialized school for the deaf that helped with oral communication. Later, she had to quickly adapt to a traditional elementary school by learning how to read lips, which allowed her to attend regular classes without the need of an interpreter.

“People are uncomfortable with others that are different, especially children,” she says.

Although she didn’t need an interpreter throughout the high school she attended, Christy was still alienated by many in her class. She also felt most of the classes were difficult and overwhelming due to the language barrier. Fortunately, she found her “release” and “outlet” in her art class.

“Though I had always been creative, it wasn’t until high school that I fell in love with art. I had found an escape from silence,” says Christy on her website. “With the movement of my painting instruments- a brush, palette knife, fingers— the vivid colors and shapes—abstract or sharp—art became, for me, sound.”

The talented artist went on to become the first deaf student to receive a Bachelor of Fine Arts degree from the renowned Ringling College of Art & Design. In 2001, she started Art by Christy as a freelance artist. Her husband Brock, who dated Christy when she was in high school and reconnected with her after college, left the corporate world to join the business in 2006.

“Brock is a real southern gentleman and the first guy that accepted me for who I was, disability and all,” she says. “He believed in me and made me feel like a normal girl.”

Brock describes Christy as a “model-like, beautiful girl with a “heart of gold” and is proud and happy he talked to her when other guys were too intimated to due to her being deaf.

Today, the business is thriving from their home, which is also their gallery and studio, in Gretna. On top of the posters for the two rodeos, Christy was commissioned to do the artwork the 2018 New Orleans Wine and Food Experience and the 2010 French Quarter Festival. Brock and Christy even successfully published a children’s book titled “Gris Gris and The Cypress Tree.”

Although her business is prospering today and she’s hit many goals she set for herself, like her school life, Christy has adapted and persevered in her professional life to keep it growing. Selling her work exclusively —bypassing various overzealous or unreliable art galleries and changing her main art style from pallet knife painting to finger painting after she noticed the over saturation in the market are just some of the ways she’s been able to adjust in the industry.

“There have been some ups and downs for sure. In a creative business like this, you are only as good as your last painting. That, coupled with a down and up economy, make for an interesting lifestyle,” Christy says.