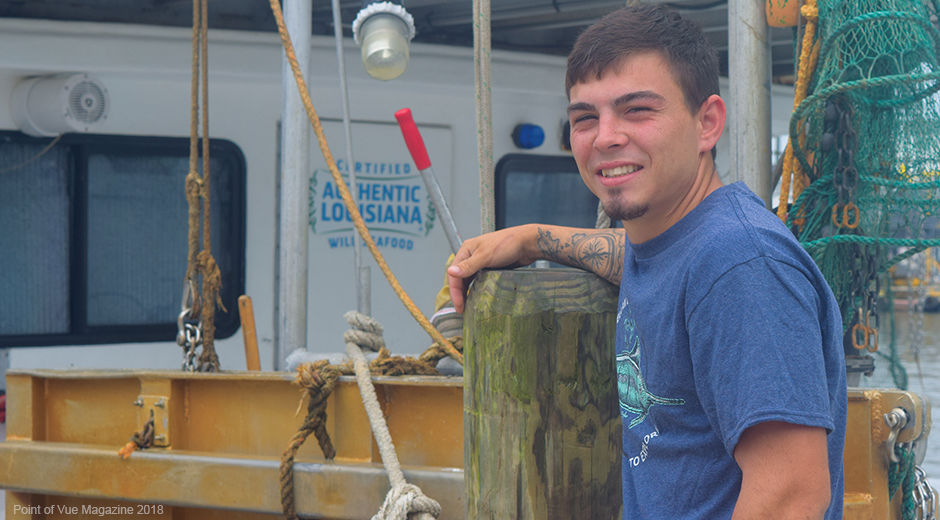 A brilliant summer sun pushed its way upward from the Gulf of Mexico horizon as Austin Trahan completed his last drag through waters not far from Isle Dernière.

An electric winch whined as they wrenched two full net-bags above the deck of the 32-foot Princess Mickayala, which the 20-year-old Dulac captain had named for his bride. Ropes holding them closed were undone and shimmering shrimp squirmed amid small finfish and skittering crabs. Austin’s deckhand, Dylan Solet, went about the task of separating the shrimp from the bycatch, as the vessel headed north toward home. The shrimp would join those already on ice in the hold, with the bulk of the catch numbering between 14 and 20 per pound, a spread of respectable sizes that would fetch a good price at the dock.

“I feel honored that I can continue the  family tradition,” the fourth-generation fisherman said. “There are not that many younger guys like myself that shrimp anymore.”

Anyone who lives in the Bayou Region can tell you that we – and Louisiana as a whole – have a reputation for harvesting scrumptious shrimp along with other seafood products. But not everyone has a working knowledge of specifics as to how our signature critters get from sea to shore to tables not just here but throughout the U.S. What most of us don’t see is that the local shrimp industry is and has been undergoing some big changes. Nonetheless, certain aspects are the same as they have been from the first cast of a net here centuries ago: our waters are blessed with an abundance of shrimp, and if people want to eat them, someone has to go do the catching.

And yet, the number of fishermen is declining steadily. As Austin said, there are few young men or women who want to make shrimping a career. Dogged by extremely low dock prices largely due to a market dictated by the prices of shrimp from Asian farms and other factors, experienced fishermen are throwing the towel in early, seeking jobs in other industries or retiring if they can.

According to the Louisiana Department of Wildlife and Fisheries the number of licensed commercial shrimp fishermen in Louisiana dropped from 10,006 in the year 2000 to a low of 5,101 in 2008, and fewer than 5,600 thereafter.

Those who continue fishing our near and off-shore waters are the living legacy of a profession important not just from a financial point of view – Louisiana’s shrimp industry is valued at $167 million or more annually – but also for cultural identification. Our shrimping industry is a part of who we are as a community.

Louisiana is actually home to two shrimp fisheries. Small vessels harvest from inshore bayous and bays, many of them making short “day trips” which are largely done at night, when there is less bycatch and the sun less intense during summer months.

Medium and big boats that have proper permits can travel in federal waters, as far out as they wish. They may stay out for weeks at a time. Once limited by the length of time shrimp could be kept fresh on ice, many big boats, 60 to 80 feet in length, now have processes for quick-freezing on board, allowing them to stay out as long as fuel supplies allow.

Small or large, the operations involve someone traveling to the waters where shrimp are living out their life cycles, lowering the booms or skimmer frames over the gunwales of their boats. Net bags open and the ends trail behind the vessels as their motors push and strain forward. After a maximum of 55 minutes — a legal requirement from April through October, increasing to 75 minutes the rest of the year — the nets or bags are hauled up by the winches. The bags are untied then tied again, and the process resumes.

Austin’s destination once he had finished the night’s work was Shrimp Kingdom Seafood in Dulac, the dock owned and operated by his father, Tracey. Once the owner of three shrimping vessels and himself an experienced captain, Tracey routinely buys shrimp from Austin as well as from other shrimpers. This trip’s shrimp net $1.80 per pound. Prices fluctuate depending on market demands. The same shrimp a few years back could have earned nearly twice that much.

Tracey also takes his own vessel out when he can, the 57-foot Captain Anthony Puky Trahan, named for his late father, also a fisherman like his father before him. “My hope is that maybe our president can help the industry,” Tracey said. “They need to make trade fair because it isn’t fair.”

At one time docks like Tracey’s almost exclusively supplied the processors on bayous Little Caillou and Grand Caillou who peeled and froze shrimp for shipping all over the U.S. But the number of processors has dropped substantially. Two of them, Hi-Seas and Gulf Island, remain in Dulac and buy shrimp from docks as well as directly from boats that tie up to them.

It is the processors who are more directly involved with the global market in shrimp, pitting them in the most direct competition with importers whose volume increases as prices continue to drop. Total U.S. shrimp imports were more than 664,000 metric tons in 2017, worth an estimated $6.54 billion.

The shrimp Austin caught will more likely be sold directly to restaurants, or to wholesalers who will then sell them to retail outlets, the bulk of them being in southern states.

Gulf shrimp — whether from Louisiana, Mississippi or Alabama, Florida or Texas — make their way frozen from packers and processors to New York’s Fulton Fish Market. But restaurateurs and wholesalers in the north said in interviews that they prefer shrimp from Mexico and some other nations, because they are packed with greater uniformity at a lower price. When dishing out portions strictly regulated to keep costs down, the uniformity matters. In gourmet kitchens, however, some chefs swear by the Louisiana product and are willing to pay more.

Despite the bleak market, those who have stuck with the industry continue to find new ways of shipping their product at a price that will make business worth staying in. So long as they can do so, the “skylines” of bayou communities like Chauvin and Dulac, Pointe-aux-Chenes, Dularge and Montegut as well as the towns all along the expanse of lower Bayou Lafourche, will continue to serve as signs of a proud tradition.

“I would like to keep practicing to do better,” Austin said, after a day’s rest. “It is hard work but I guess you kind of get used to it. There is always something to do on this boat, just maintaining the vessel itself.”

With his deckhand on board, and fuel and ice loaded, he took the wheel of the Princess Mickayla. Austin was ready for another trip to the Gulf, the skies west of Dulac turning a brilliant shade of red, always a harbinger for good in the world of those who make a living on the water. 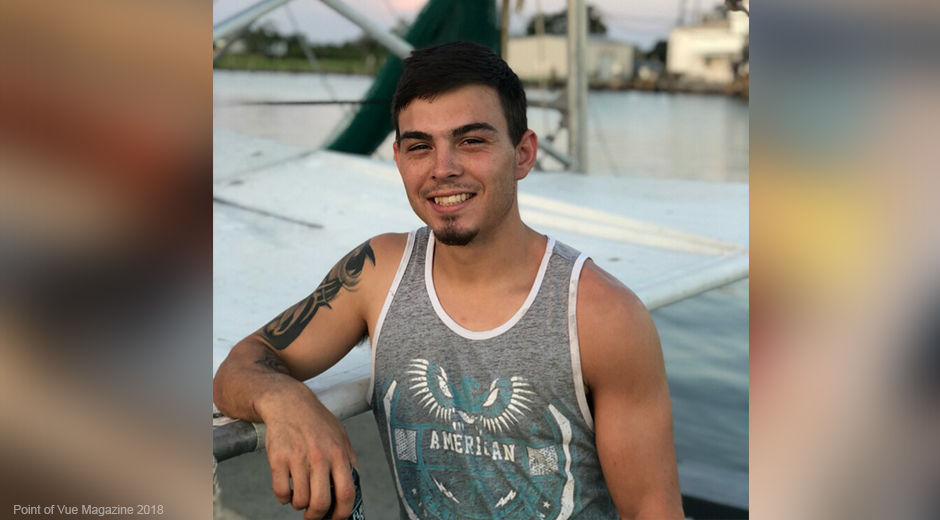 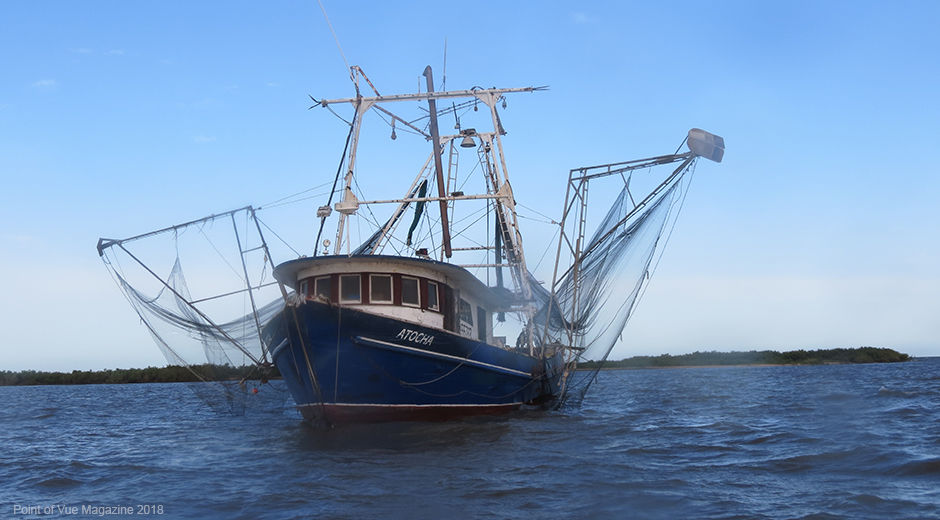