All-In in the Pickle Biz 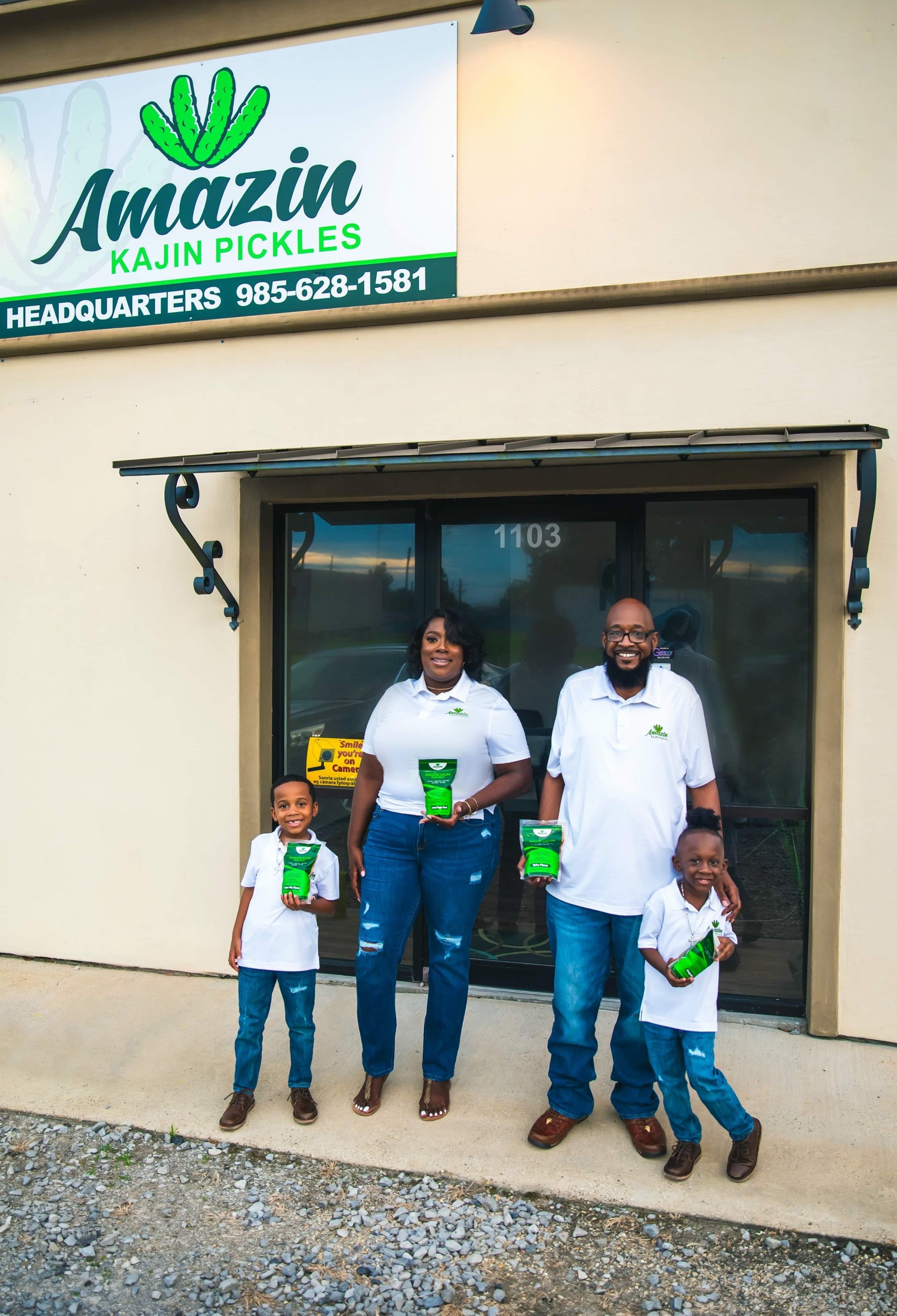 From video blogs to captioned selfies with their products, if you search the hashtag #amazinkajinpickles, you will find rave reviews by many satisfied customers from the Bayou Region and beyond.

Now manufacturing 700-800 pickles a week, being featured in roughly 10 local convenience stores and shipping to customers across the country, the Houma-based Amazin Kajin Pickles has been rapidly expanding since owners and husband and wife, Kami Gauche and Armeisha Gauche, decided to go all-in on their pickle business just five months ago.

Their success comes about a year and a half after the family decided to start an experiment.

“That was Kam’s idea, but he says it’s because of me. So, I’m thinking he didn’t want to buy me any more pickles,” Armeisha laughs. “He’s very innovative; if he thinks he can do something himself, he will.”

Kami and Armeisha’s two sons Kami Jr. and Konnor began working on the pickling process with their father, and the family was able to eat their own homemade pickles.

The idea to take the hobby and turn it into a business originated from 5-year-old Kami Jr. “He said, ‘These pickles are really good. I think we should share this one for the whole world,’” Armeisha remembers.

After just one simple social media post, family and friends began to message Armeisha about the snack, and then word of mouth carried the business from there and created the opportunity for it to enter the next phase — selling in stores.

Kami was interviewing for a position at Cheap Smokes in Houma when he was asked about the pickles by the manager, and later after she and the owner tried them, the store began featuring them. “Cheap Smokes would literally sell out in hours,” Armeisha recalls. “After he would put them there, by the time he got home they were sold out.”

Next, Armeisha built the company a website, which she describes as “the ugliest website anyone could imagine.” However, once she shared that they started shipping and their website on Facebook, the family had 100 orders to fill in a week.

The businesses began to blossom; yet, such as most entrepreneurs, Armeisha and Kami encountered some setbacks.

Their then cucumber supplier started sending a low-quality product, sometimes being moldy, and other times, because they weren’t stored in cool places, they turned really soft by the time they reached the customers.

“We had to really stop production and go back to the drawing board,” Armeisha shares. “We said if we want to grow this business, we have to give out quality products.”

Following testing out different cucumbers from various vendors and areas this past summer, Armeisha says, they found perfection. “It was about finding the right cucumber that would stay crunchy, crispy and fresh,” she continues. “For the most part, our customers like the idea that it still has that cucumber taste, but it also has that pickle taste. So that’s what kind of separates us from the regular pickles.”

In August, Amazin Kajin was ready to continue business and did so with a brand new manufacturing plant. Located at 1103 Barataria Ave. in Houma, the new high-tech plant produces its famous pickle bites in original (dill pickle), spicy, super mix (lemon pepper and spicy mix), garlic and ranch flavors. The super mix was also Kami Jr’s idea. “They [Kami Jr. and Konnor] contribute a lot to the business — with the name, marketing ideas, all kinds of things.”

Reaching much farther than the Houma-Thibodaux area, they have shipped products to all over the United States, even all the way to Hawaii.

The family also decided to include a storefront at the manufacturing facility because they wanted to engage with their customers in-person and create another way for customers to pick up their snacks as local stores would quickly sell out of their products.

Family, community and giving back are at the forefront of the Gauche family’s values. “Kami and I are both givers. So for us, it is family-oriented, but we are just about giving,” Armeisha says. “To me, it’s an honor to be able to start and build a business in my community, give my community jobs and be able to give back to my community.”

The entrepreneurs are still striving to experiment and expand, too. Armeisha says they are working on other products, such as hamburger slices and relish, and are planning to get their pickles into some major supermarkets.

“We believe in stimulating our local economy,” she says. “The more we grow, the more we can grow our community.”

Amazin Kajin Pickles products can be found in Houma at Sarah’s, Shop-N-Bag, Jubilee, Cheap Smokes, and occasionally at Nocko’s, Shamsan Plus, and Civic Stop. In Thibodaux, the famous pickles can be found at Peaches Mini Mart and Joni’s Mini Mart.

Go to amazinkajinpickles.com to order them online. POV