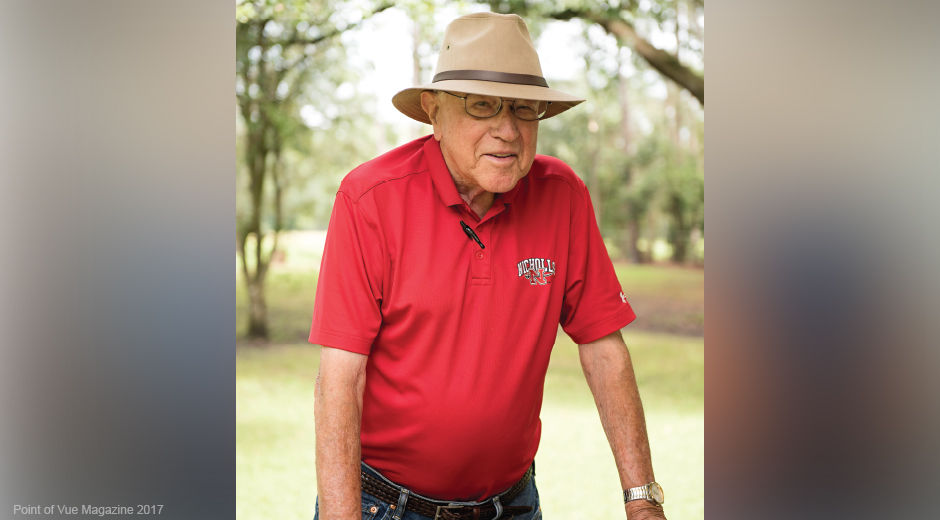 “Service,” “selfless” and “volunteer” are words that should come as no surprise on a pop quiz about this former teacher’s life. When buzzing around Thibodaux, it should also come as no surprise when you see Luke Ford’s familiar, smiling face at every community event.

Luke was born and raised in Thibodaux and has had the honor of serving in the Lafourche Parish School System as a teacher, coach, assistant principal, principal, and Title 1 Supervisor until ultimately retiring in 1998. He graduated from Thibodaux College High School in 1952 and shortly thereafter, enrolled in Nicholls State University. After two and half years of college, he decided to make a change in his career path by enlisting in the U.S. Army and served our country from 1955-1958. After his service, he attended Nicholls State University again. Determined, he took night classes, eventually earning his Bachelor’s Degree in Education in 1963. Luke began teaching at Thibodaux College High School until 1966. The 1960’s were a time of integration and The Civil Rights Movement. Though the tension was evident, Luke remained persistent and professional, treating all of his students equally and with the utmost respect.

Over the course of several years, Luke obtained his Masters +30 degree in 1971 while teaching at Thibodaux High School. He was known for beginning class with a light-hearted joke to get the students laughing before he presented their lessons and assignments. He was promoted to Assistant Principal in 1977 at Thibodaux High School then two years later he earned the position of Principal at that same high school.

Throughout his career, he has contributed so much to the Thibodaux community including but certainly not limited to the role of president and vice-president for the South Central Officials Association, the Nicholls State University Alumni Association, the Thibodaux High School Tiger Club, the E.D. White Cardinal Club, and the Nicholls State University Colonels Club. Luke’s professional affiliations include the District7-5A Principals’ Association, where he served as president from 1991-1993.

In 1992, Luke was one of six finalists from across the state in the high school division to be selected as a regional finalist for the Principal of the Year Awards Program. Twice in his career, he was a finalist for that honor.

Luke’s list of service organizations is long and distinguished. Outside of professional involvement in educational organizations, Luke has done his fair share by being involved in service organizations such as Thibodaux Lions Club, Society of St. Vincent De Paul, Knights of Columbus, Thibodaux Chamber of Commerce, Board of Directors for the Thibodaux High Tiger Club, Colonel Club, as well as E.D. White Alumni Association.

In 2010, for his service throughout the years, Luke was inducted into the E.D. White Catholic High School Hall of Fame. Since then he has remained active by tutoring students at St. Joseph and South Thibodaux Elementary. Cecile LeBlanc, a friend of Luke’s affirms, “Teacher, coach, or administrator, Luke pursued his work conscientiously. He has been a dutiful husband, father, teacher, and volunteer.”

After all these years, Luke still resides in Thibodaux with his wife, Betty. They have two children of their own, John and Lisa, along with five grandchildren. Luke has been a prominent figure in so many people’s lives but most importantly in the life of his family. His proud daughter, Lisa, says that when his grandchildren had games, her father did his best to never miss one of them.

“I believe if a person’s assistance and offerings to others are half the amount that Luke contributes to genuinely helping and caring for those in the community, then that person would be viewed as one that practices the Catholic faith in a way that God meant it to be practiced,” says John Ford, Luke’s son.

Lately, Luke is still staying busy, beginning his day at 3:30 each morning. He has a daily routine of breakfast with former, now retired colleagues. He is still highly regarded as a great instructor. Students who see Luke today still refer to him as “Coach” and regardless of weather conditions he still attends every Nicholls State University football game he can. Without a doubt, he has made an outstanding impact on his community through years of dedication and hard work, yet remains humble when it comes to his accomplishments.