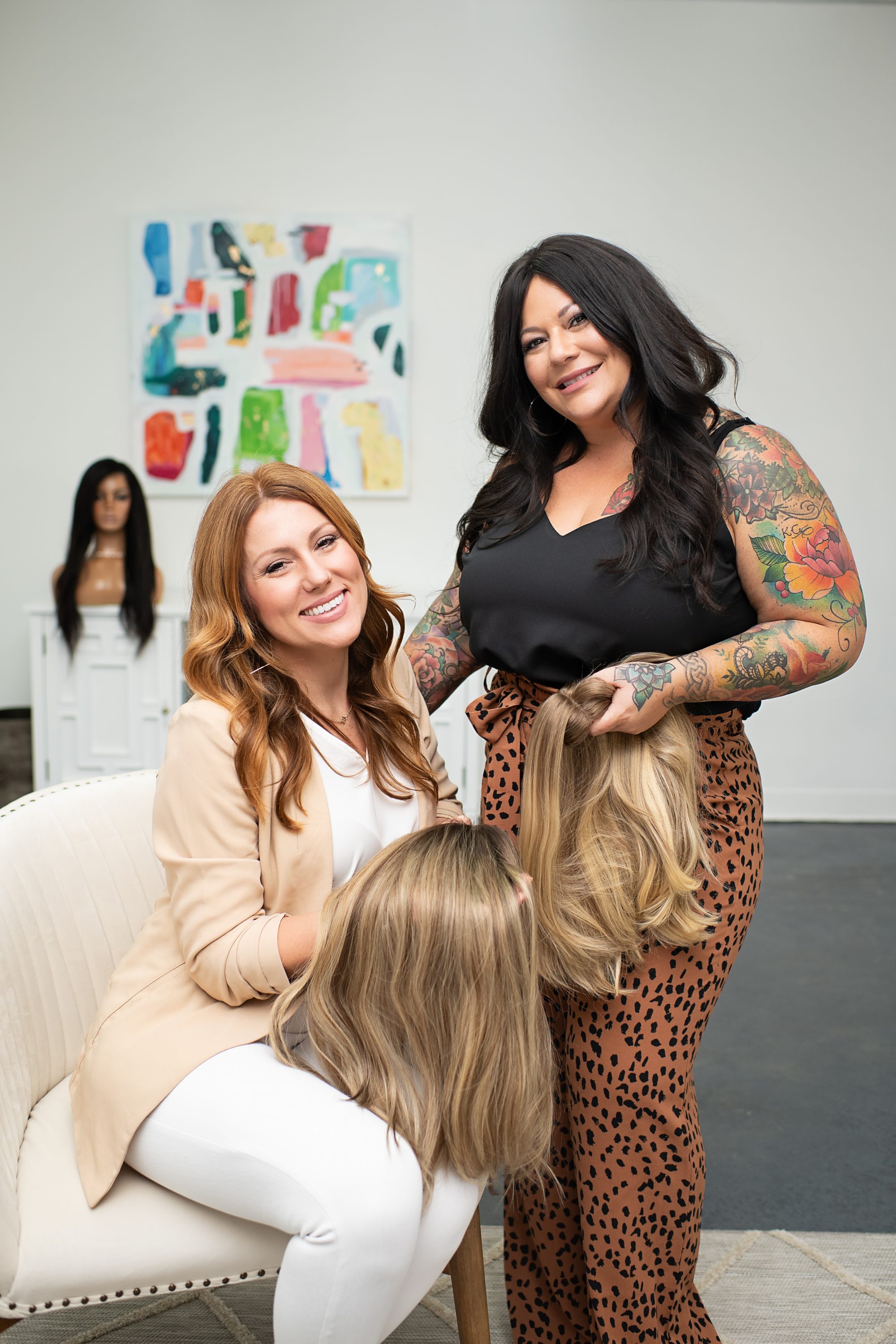 Whether intentional or not, it’s solidified itself as one of the most distinct qualities of a person’s appearance.

“It’s really like the first descriptive if you think about it. They’re like, ‘Oh, what does she look like?’ ‘She was blonde. She had long black hair. She had a short bob.’ It’s the first thing we say when we go to describe someone,” Bree D’Errico, co-owner of Bremly Beauty in Houma, says.

For Bree and her longtime business partner Emily Ougel, helping women feel happy with their hair has been the story of their career. The pair has styled hair together since 2010, moving to several salons before ending up at their newly-opened Bare Essentials Salon on West Park Avenue. In those 10 years, Nicole Oncale, Bremly Beauty’s public relations manager, says the duo has picked up a “fanbase” of women that support them.

For that “fanbase,” their message is clear: hair shouldn’t define anyone, but it’s always important for a woman to feel confident when she looks in the mirror.

That’s exactly why, as life brought new challenges during those 10 years, the Bremly Beauty team discovered a part of having hair that no one was talking about: the loss of it.

And so, the women of Bremly Beauty introduced the sale of customized wigs and toppers to their business.

However, they didn’t want their wigs and toppers to be ordinary. They wanted them to look and feel natural so that women would have a sense of confidence and unashamedness while wearing them.

After all, the experience of losing hair and searching for solutions is personal for the Bremly Beauty team.

Emily’s experience with hair loss began after having children.

“Being a mom who loses her hair, you just had a baby. You lost all your freedom. You lost your body. You lost everything, and then you’re sitting at home with a baby, in four walls surrounding you…Your baby brings you joy, but you feel like you’re not yourself anymore,” Emily says.

For most of her life, Bree has suffered from hormonal hair loss.

When she had her first daughter at 15 years old, she began to experience what she thought was natural postpartum shedding of hair. By the time she was 18, though, a close friend pointed out that her hair loss was becoming noticeable.

“I didn’t have any direction. [There was] nobody to tell me, ‘This is what you should do,’” Bree says. “I just kind of dealt with it. I tried to style my hair to hide it. I’d cut it shorter and shorter and shorter, thinking I was putting too much strain on it because it was so long.”

By the time she had her third child at 25, Bree says she was left with very little hair on the front of her head.

Around that time, she began her career as a hairstylist, but not without fears following her there.

“I was so scared. I’m like how am I going to be a bald hairdresser? This is my job, my profession and my passion, and who’s going to be like, ‘I want you to do my hair, when you don’t have any’?” Bree says.

Bree says she had always looked for solutions to combat her hair loss, from extensions, to topical powders, to shampoos. It wasn’t until four years ago that she first discovered toppers. From there, she says her “whole life changed” and she began to feel like herself again.

Bree began to help women suffering from hair loss to get trendy wigs, obtaining and customizing pieces here and there for those who reached out to her.

Then, in 2018, Nicole was diagnosed with breast cancer.

When her doctor informed her that she would lose her hair within two weeks, Nicole says she panicked over the uncertainty of how she would navigate hair loss.

At the time, Bree was Nicole’s stylist, so Nicole reached out to her for help with purchasing a wig. The pair began to do research, and Nicole found a wig that Bree was able to customize to look like Nicole’s natural hair.

The process of finding the perfect wig was not easy, though.

“There was nothing locally that I could find. I went to a shop in New Orleans, and it was a terrible experience. The hair looked not very trendy. It was terrible. I thought if this is what I’ve got to look forward to, then of course I’m not going to survive hair loss,” Nicole says.

Nicole said she took her experience to Bree and Emily and discussed the fact that there was undoubtedly a local need for hair loss solutions.

“We have Mary Bird Perkins [TGMC Cancer Center], Thibodaux Regional Cancer Center, and all these women who experience hair loss. I don’t know if most women who are diagnosed with cancer, or even that have hair loss period, know that you can have human hair wigs and toppers that look very trendy, that are easy to wear and it’s undetectable,” Nicole says.

Nicole’s struggles were the catalyst that led the Bremly team to realize there was a lack of local access to comfortable, trendy wigs and education about hair loss solutions. The trio thus began to discuss ways that Bremly Beauty could bring such services to the area.

When the women had to shut their business down as a result of measures put into place to slow the spread of COVID-19, the team used its newfound free time to find hair piece vendors, develop a plan and make the sale of customized wigs and toppers possible.

Bree begins the creative process of styling a wig or topper by ordering various hair pieces of different styles and colors to keep in Bremly Beauty’s inventory. She said she pictures an end result and then goes to work.

If clients want a specific look, they are asked to send “inspired photos” of the hairstyles they desire. Then, Bree colors and styles the pieces to meet the clients’ wishes.

Though many people are not familiar with the concept of a topper, Bree says they serve as solutions for women who have some level of hair loss but not enough that would necessarily require a full wig. The topper is enough to cover small areas of hair loss.

For Bree, helping women to obtain hair pieces that look and feel natural is “the most gratifying feeling in the world.”

“To look at a woman see herself for the first time and be confident and proud and not withering back because she’s so sad and so ashamed of what she sees in the mirror…it’s very rewarding,” Bree says.

While they emphasize the fact that that hair doesn’t define one’s beauty, the Bremly Beauty women say that there’s no value that can be put on the sense of comfort that comes with looking in the mirror and seeing hair.

Nicole said the physical experience of going through chemotherapy is challenging enough, but the accompanying hair loss takes its own mental toll, too. The ability to wear hair to events for work or her children, for example, made her feel like herself again.

“It wasn’t just physical for me. It was mental,” Nicole says. “I felt so robbed of my identity through cancer…When I was able to transform my whole face with hair, it made such a huge difference for me, and I felt like I had me again…I wasn’t the girl who had breast cancer”

Of course, Nicole is not alone in her experience with hair loss due to chemotherapy.

Local breast cancer warrior Kate Stark, who partnered with the Bremly team in May to participate in a live-streamed wig and topper try-on event, says that once she got over the shock of her initial diagnosis, she felt as though she was about to be stripped of everything feminine about her.

Since her main focus through her battle with cancer was getting well, Kate says she was less emotionally impacted by the loss of her hair.

Thus, she viewed wigs as something fashionable with which to experiment, trying everything from purple wigs to blue wigs. Around that time, influencers like Kylie Jenner and other members of the Kardashian family were beginning to make wigs more mainstream, Kate says.

“They were really changing the face of wigs…The Kardashians wear wigs all the time,” Kate laughs. “When Kim [Kardashian] comes out blonde, that’s not her hair. I tried dying myself blonde and damaged my hair.”

Kate and Nicole both believe that hair loss and all of its various causes are subjects that need to be addressed more so that talking about them can become more widely accepted.

Having a community of women in the area who understand each other’s struggles with hair loss is important for both the community and women in general, Kate says.

For women experiencing hair loss, she encourages them to not let it define them.

In addition to helping women cope with hair loss, the Bremly Beauty team hopes to end the overall stigma around wearing wigs and toppers.

For example, Emily says that if a woman wants to change her hair color, she can choose a long-lasting wig instead of spending hundreds of dollars to risk damaging her hair to dye it. If a person wants more volume on top of her head, she can choose to wear a topper to obtain that style.

“A lot of people think wigs [equal] cancer,” Kate says. “It is a big deal for cancer patients and then for people that have alopecia or hair loss, but wigs are so much more than that…If you just maybe want to come try a wig, it’s for everyone.”

Through their shared experiences with hair loss, the women behind Bremly Beauty have leaned on each other for constant strength, support and care.

“Me and Bree, we’re just partners. We knew each other from the past. We got together. We started working, and we just have a total respect for each other on such a level that we’re each other’s person through everything,” Emily says.

“[Bree] was very much a saving grace for me. She always seemed to be around for some pretty traumatic events in my life, and so I just feel like anybody that’s going through hair loss needs somebody like Bree around,” Nicole says.

In turn, the women aspire to help other women feel less alone in their own journeys through hair loss. They’re committed to helping women in every stage of that journey. 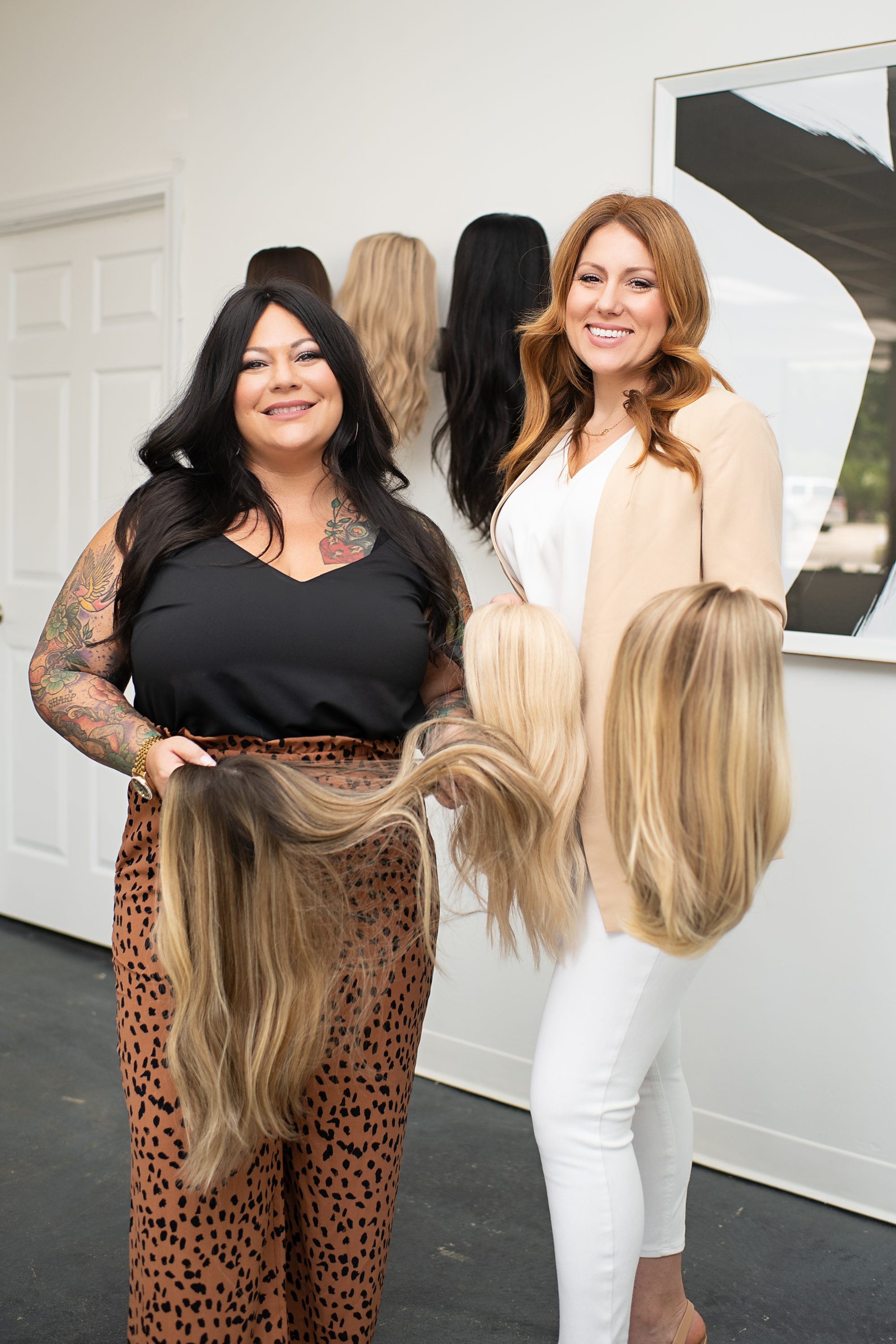 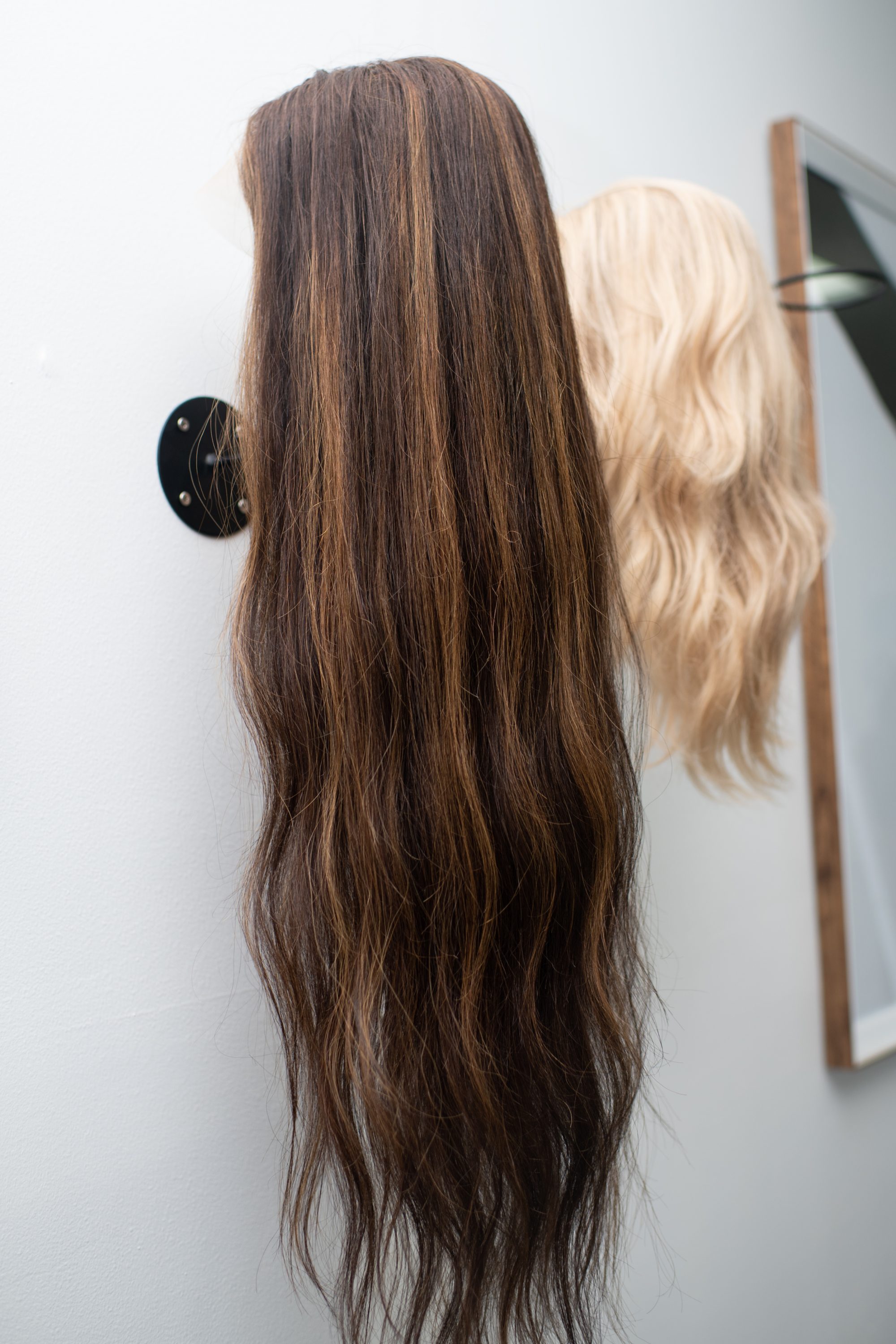 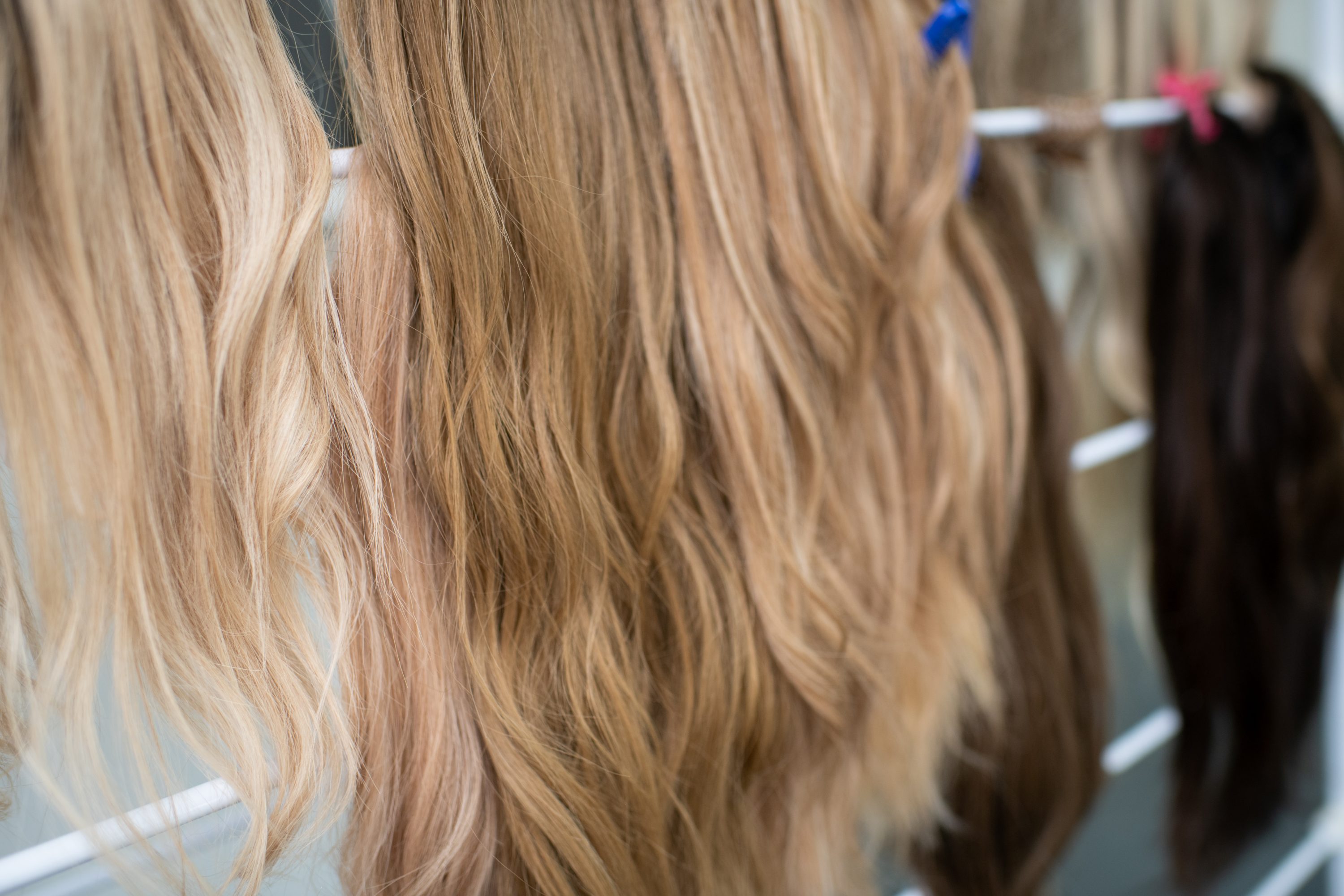 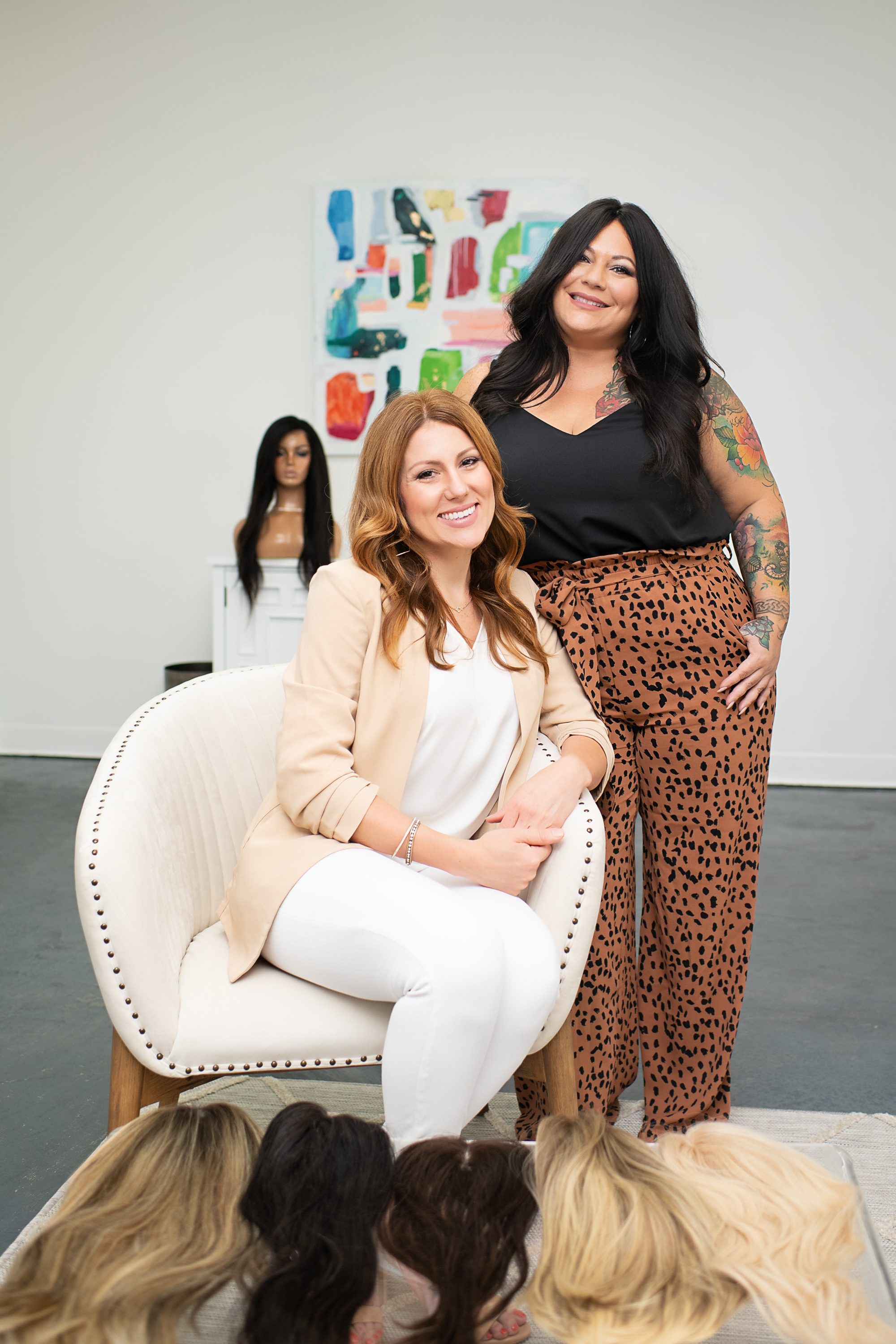 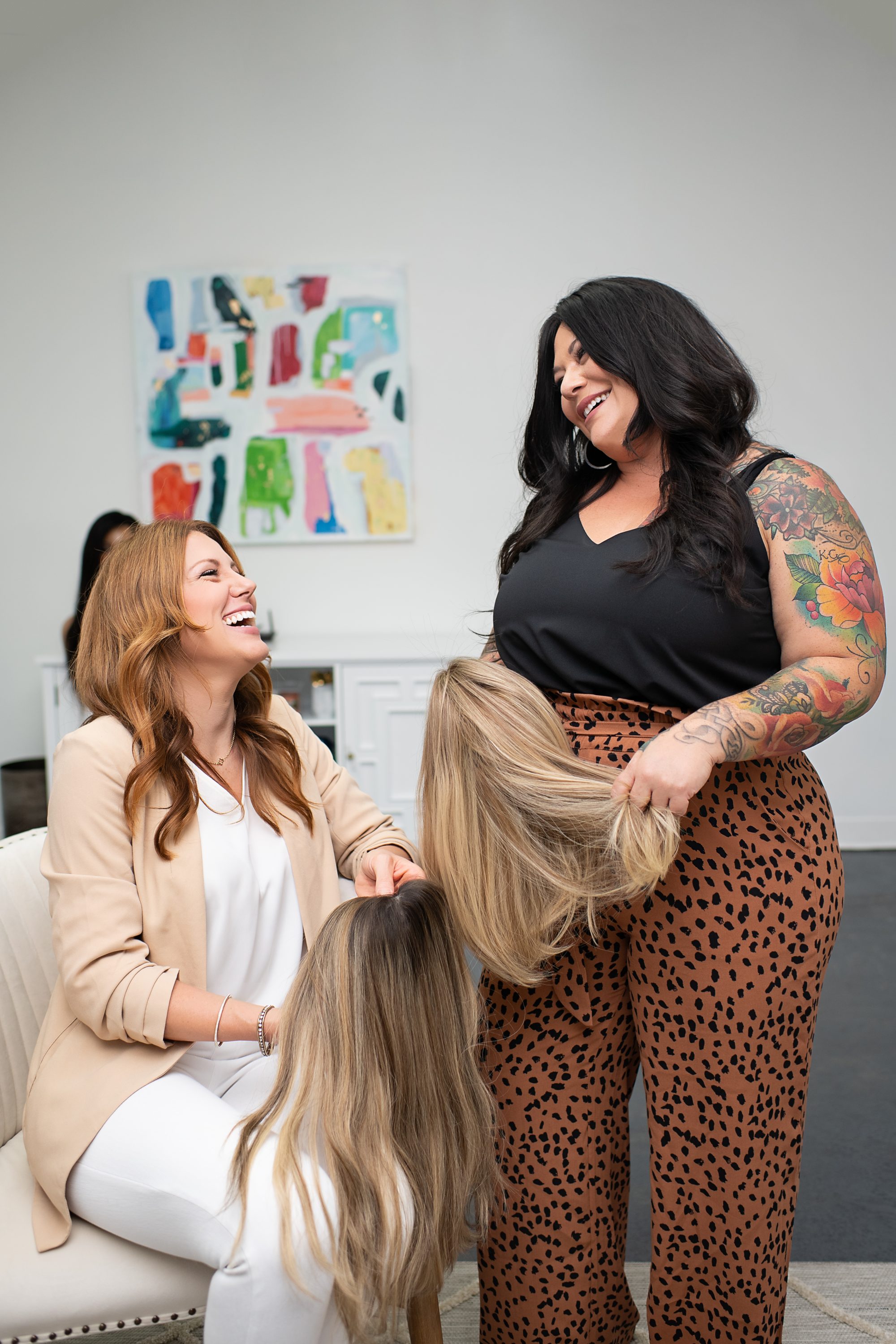