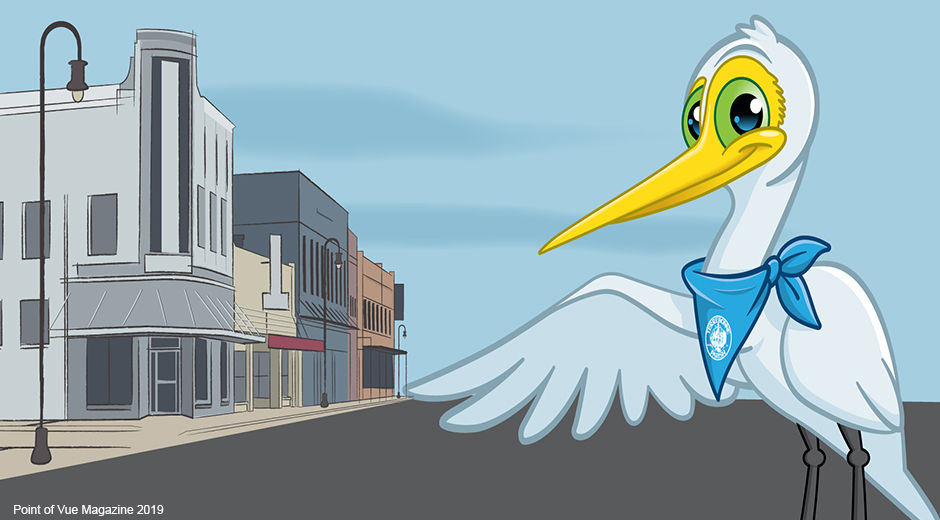 Downtown is Waiting for You

Historic Downtown Houma has long established itself as the one of the most beloved areas of the city. From exciting festivals to the reinvigorating night life, from celebrated restaurants to fashionable boutiques, the Main Street corridor is already the place to be.

But imagine if it was enhanced with public art installations, more outside seating areas, pop-up shops, pocket parks and of course, food trucks. That and more is coming to the downtown area this October. Although it will initially be temporary, the entities behind the change hope it will be what Downtown Houma will transform into in the not-so-distant future.

Over the summer, Terrebonne Parish Consolidated Government (TPCG) and the Houma Downtown Development Corporation (HDDC) announced Downtown Demonstration Days (Oct. 18-19) — a two-day demonstration to show the public their vision of what the downtown corridor could become.

“There are so many little strategies and types of improvements that can be made,” says Christopher Pulaski, director of Terrebonne Parish Planning and Zoning Department. “…How do you show people what you’re talking about? One of the most successful techniques to do it are these demonstration day projects.”

The pilot will also feature angle parking along two blocks and back-in angle parking for one block. The latter, Christopher explains, is safer than parallel and traditional angle parking because it positions occupants of the vehicle to go towards the sidewalk versus oncoming traffic.

“Imagine getting your children out of the car of a typical spot you pull into,” Christopher explains. “Your doors open and your child exits towards the rear of the car, facing traffic. With back-in angle parking, your door shields your child from running into the street. They exit to the rear of the car, onto the sidewalk. Also, the trunk or back hatch of your vehicle is facing the sidewalk to make it easy to load packages or unload strollers and such.”

They also are looking to create more foot traffic in the downtown area by adding such attractions as a food truck court and pop-up shops. At press time, food vendors such as The Frying Station, Kenny’s Cajun Creole and Bee Cool Snowballs are scheduled to serve patrons at the demonstration. Calypso’s Bayou Paddleboarding Company, Outside and In, Lil’ Sweet Pea’s Boutique, Kiki & Co., Cajun Sweets Bakery and other businesses will set up shops to sell merchandise.

On top of those exciting additions, TPCG has partnered with the Bayou Regional Arts Council and local artists for the art installations, and the Saint Francis Vegetable Garden, LSU AgCenter and Louisiana Sea Grant to bring a farmer’s market to life — which will include fresh produce and seafood. They hope to create drop-offs for ridesharing services as well.

TPCG is considering, if possible, lowering the speed limit for that stretch of Main Street, to make the pedestrian flow easier and safer. Main Street Manager Anne Picou hopes that through this event, they could also configure the necessary systems to put in place that cater to those of the special needs community.

“Whether they’re visiting Houma, or they are actual residents of Houma, people like to gather amongst one another,” Anne says. “So, we’re trying to create that gathering essence for them.”

It wouldn’t be a true test of Downtown functionality without a festival. What better way to demonstrate the richness of our community than to have a festival in the heart of downtown that benefits our community through the gift of volunteering and financial support.

The Kiwanis Club of Houma will be hosting its first Howl-O-Ween Dog Parade and Festival at the courthouse square Friday, October 19 from 9 a.m. to 12:00 p.m. The event kicks off with registration, then a short canine parade — after which awards for best dog costume, best owner/pet look alike costume, obedience and other categories will be presented. There will also be a howling contest and the coronation of a king and queen based on essays submitted from the dog’s point of view. Various dog-related vendors will feature their goods and services. The event is a fundraiser for the Kiwanis; the club is accepting donations of any amount to register for the event and is also seeking sponsorships from local businesses. More details such as rules, parade route and sponsorship information can be found online at www.kiwanishouma.com.

“We’re packing a lot of stuff into a three-hour event,” Kiwanian Joe Kopfler says. “While we’re hoping to make some money for our club, our focus is more on making it fun for the participants. If everyone has a great time and we learn what works best, we’re hoping we can build on that toward bigger and better in the future.”

Although the changes during Demonstration Days will be temporary, TPCG hopes the feedback from the two-day experience will allow them to zero in on what will work in their masterplan to enhance Downtown Houma. “We’re doing this because we want people to give us their feedback,” Christopher says. “If you don’t come out and voice your opinion, we won’t know what you want,” Anne adds.

Christopher acknowledges that this event wouldn’t be happening without the Gordon Dove Administration, his hardworking team, Anne, the Houma-Terrebonne Chamber of Commerce and all the other partners and sponsors of the demonstration.

“We have been super busy and have had such a huge outpouring of support from the community on this project,” says Katie Tabor, planner with the Planning and Zoning Department.

Volunteers are still needed to pull off the event. To sign up, visit the official website of Demonstration Days: http://www.tpcg.org/downtown. The site plan and any announcements regarding the demonstration can be found on the website, too. An open survey will be available after the pilot as well.

“People like Downtown; there’s no question about that,” Christopher says. “But we never want to stop improving, and we felt that we wanted to take a bigger leap than we’ve ever taken before.”