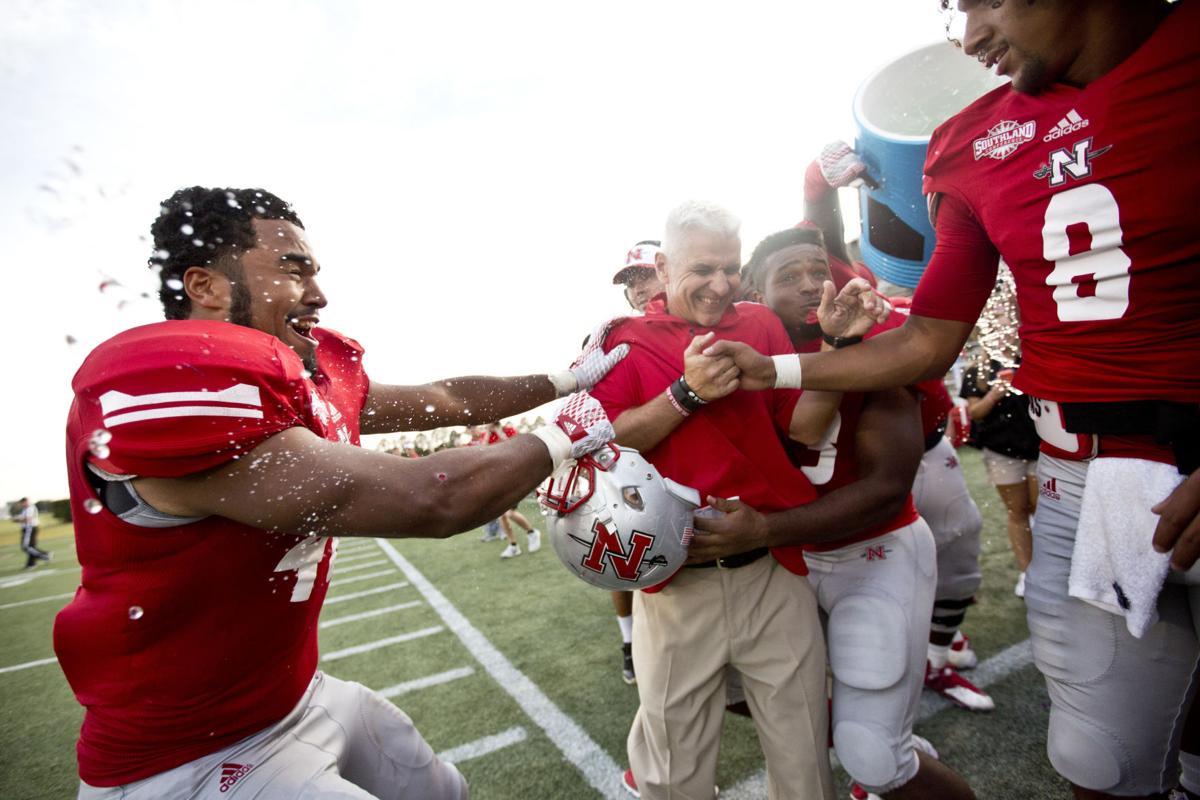 But the Colonels’ season ended with a thud, a heartbreaking, last-second loss against South Dakota in the opening-round of the FCS Playoffs.

The bitter sting of that loss, combined with memories of 2017 success, are being used as fuel for a roster which features almost everyone back in 2018 — a group which is widely being heralded as one of the top teams in the country.

Nicholls was picked to finish second in the Southland in preseason polls — behind just Sam Houston State. The Colonels have more players on the Preseason All-Southland Team than anyone else in the conference and coach Tim Rebowe believes they’ve put in the work necessary to prosper in the coming year.

“It’s quite an honor,” Rebowe said of the preseason accolades the Colonels have collected. “It says a lot about our players and how hard they’ve worked and that your peers and the people you play against respect you. … We need to remember what got us here, and that was hard work, staying positive, strapping it up every day and doing all the simple, little things that got us to this point.”

Fourcade is arguably the “face” of Nicholls’ rebuild — the first well-known Louisiana recruit to commit to the Colonels in the Tim Rebowe Era. He’s started since day one on campus, helping improve Nicholls from 0 wins in 2015 to 5 wins in 2016, then 8 wins in 2017. He’s a weapon. Last year, he passed for 2,316 yards and 14 scores. But more important than that, he’s a leader — on and off the field for Nicholls.

Bussey is somewhat of a man of mystery for the Colonels this year, though he arrives with a lot of hype. A former prized recruit out of Isadore Newman High School, Bussey has played the past several seasons for Texas A&M, showcasing his talents against SEC defenses. Now, he’s a Colonel and he has two seasons to jumpstart his career.

Sully Laiche is a nice guy off the football field. But on it? He’s about as mean as they come. Laiche signed with Nicholls out of Lutcher and he’s been a dominant force since enrolling on campus. As a true freshman in 2016, Laiche earned First-Team All-Southland Conference, recording 60 tackles, including 9.5 sacks. Last year, his total tackles went down, but his disruptive plays went up. Laiche recorded 9.5 tackles for a loss and was fifth in the conference with 7.5 sacks — all while battling injury.

Corey Abraham is one of the few remaining Nicholls players who has survived both the good and the bad with the Colonels. He signed with the team in the Charlie Stubbs Era and has played in every game since the 2015 season — his redshirt freshman campaign. Last year, Abraham recorded a team-high 79 tackles for Nicholls — the second most on the team. He also forced two fumbles and had two pass breakups for the Colonels.

No matter how good you think your football team may be, undoubtedly, a couple games will come down to a kick or two. Luckily, Nicholls has one of the best in the country at booming the ball through the uprights in pressure situations. As a transfer standout last year, Fonseca was money, sinking 19-of-23 field goals — including several late in games with the outcoming hanging in the balance. He was a First-Team All-American pick for both STATS and Phil Steele. He was a two-time Southland Conference Player of the Week.

Mark Your Calendars for these “can’t miss” games:

Nicholls normally kicks off with a “payday” game — a game against a powerhouse program that is willing to literally pay a smaller opponent 7 figures to come to its home stadium for a butt whoppin’. This game is scheduled to be that on paper, but reading the tea leaves shows that there’s more than what meets the eye. Kansas is a major-conference opponent, yes. But they’re also a train wreck, having lost 33 of their past 36 games. This is a very winnable game for Nicholls — a chance to solidify their position as a FCS powerhouse.

Since Tim Rebowe took over at Nicholls, the Colonels have conquered many demons. But one dragon has remained in tact: the Sam Houston State Bearkats. An annual playoff contender, the Kats crushed Nicholls last year 66-17 — easily the most lopsided loss the Colonels endured all year. But that game was in Texas. This one is in Thibodaux — the home opener for the Colonels. Can Rebowe finally get revenge after three-straight defeats? It sure will be fun to find out.

Throw out the record books. Forget what you think you know. The annual game between Nicholls and Northwestern State is a battle to crown the “Real” NSU and that means that sometimes crazy things happen. Use last year as an example. The Colonels were a mean-machine — a playoff-bound wrecking ball that was slaying competition. The Demons were anything but. They struggled mightily and were near the bottom of the league. But when the two met, it was still competitive — a 14-10 victory for the Colonels in a game played at 11 a.m. to avoid rain bands from Hurricane Nate.

The River Bell Classic annually pits the Colonels against one of their biggest rivals, those Southeastern Lions from Hammond. The winner of the game earns the River Bell Trophy and history tells us that both teams enjoy having it in their possession. Last year, the Lions took back the trophy, beating Nicholls 21-17 in Hammond on the final week of the season. It was the second-straight year that Southeastern bested Nicholls after a 44-42 win in 2016. In 2015, the Colonels held the trophy after a 27-24 victory over the Lions. All of these games are close, folks. 2018’s version will be no different.