From the Top | Reggie Dupre Jr. 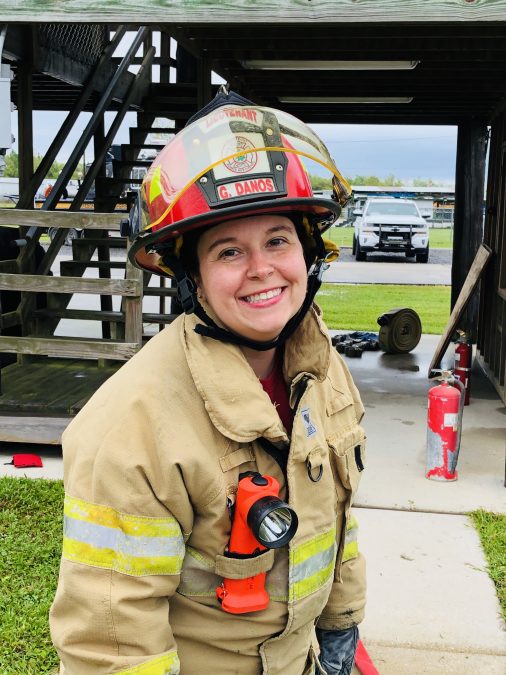 For Gina Danos, the word “hero” can hold numerous meanings, one being the definition of people who selflessly give their time and life to respond to the needs of others.

With 18 years of service to the Montegut Fire Department under her belt, there is no question that “hero” falls in line with a list of titles to describe the figure that Gina has become in the bayou community: volunteer, lifeguard, swim instructor, and coach, to name a few.

As of this spring, Gina added another title to that list when she became the first female fire chief in Terrebonne Parish: groundbreaker.

“It definitely is a great honor…We’re like a family, so everybody has a family role, so sometimes they look at me as like the momma hen, like I kind of keep things in line,” Gina says. “I think sometimes women bring different things to the table…different strengths.”

The road to becoming chief of the Montegut Fire Department began with Gina’s unwavering drive to become a paramedic.

She set her sights on a criminal justice degree from the University of Louisiana at Lafayette after high school, but news of Acadian Ambulance beginning a national emergency medical services (EMS) academy made her realize her calling was to pursue that dream of becoming a paramedic – news that appeared on the front page of a Lafeyette newspaper shortly after she settled into her new city. After one semester at UL, Gina returned home to start her emergency medical technicians (EMT) training.

However, when the department issued gear to Gina unexpectedly and she began fighting fires, the course of her path changed. She dove into the education aspect of the field, receiving numerous firefighter certifications, and served in both part-time and full-time roles with the department.

When the Montegut Fire Department’s chief position became open in April, Gina stepped up as interim chief. By May, the department named her its full-time chief.

Whether it’s teaching swim lessons, coaching local tee-ball teams, or fighting fires, Gina says that serving Montegut has been a blessing, especially since she comes from a line of family members who served the community in various capacities.

“It’s honestly a true blessing. I kind of felt like I needed to get away, but though I was only away for a couple months for that semester, Montegut was still home just in those few months. I knew I always wanted to stay a part of the community,” Gina says.

Serving with the Montegut Fire Department in the aftermath of Hurricane Ida and as the region still continues to heal from the storm’s impacts, Gina says she was moved by the strength of community members who continued to give to those around them, even as they suffered loss themselves.

As she begins her new role as fire chief, Gina says she wants to thank the Montegut community for accepting her and to let them know that the community will always have the support of her and her department.

“The department is always there for them, through the bad times, for storms, through the good times,” Gina says.