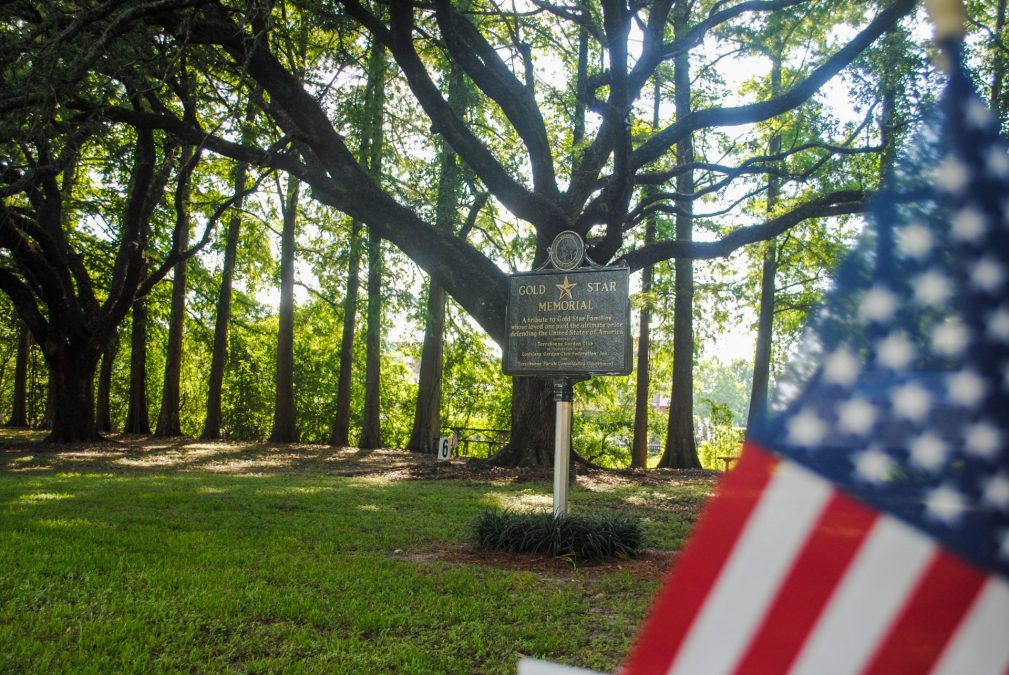 Linda Braiser has been a member of the Terrebonne Garden Club for 21 years. She is a past president, and she was the District Director of the region. She currently serves on the Executive Committee. She recalls the day a man named Jesse brought her a photo that brought a rumor to life. Linda says the rumor was floating around that the garden club helped the planning of the oak trees that were planted in honor of fallen Terrebonne Parish heroes in World War II; however, there were no records until the photo came about. The photo, containing a Gold Star Mother and two Terrebonne Garden Club members, was a discovery that has led to closure for many families. Jesse was the brother of the fallen hero that was being paid tribute to in the photo.

Jim Bowie Park lies along Bayou Black Drive and pays homage to the fallen heroes of Terrebonne Parish with 21 oak trees. The oaks embody honor and nobility, making them a powerful symbol. The term “Gold Star Mothers” derives from the World War I era, where families would display stars for family members who were fighting in the war. If they lost a member, they would lay a gold star over the pre-existing star to symbolize the loss. In the late 1940s, shortly after World War II, Gold Star Mothers along with two Terrebonne Garden Club members planted the 21 oak trees. Terrebonne Garden Club has since then registered all 21 oaks with the Live Oak Society. Alongside the Gold Star Marker is a Wayside Marker that has the tree number and the 3-5 names of the 90 soldiers.

During the 2021 Memorial Day service at Jim Bowie Park, The Terrebonne Garden Club invited the community to honor history with the dedication of a Gold Star Marker. The Gold Star Marker pays tribute to the Gold Star families whose loved ones paid the ultimate price defending the nation. It was there where Brasier saw the personal effects the park had on the families of the fallen. After the ceremony, a 98 year-old-woman led her wheelchair to the Wayside Marker, touched her late husband’s name, and laid down a rose. “I think that says it all,” Linda says, “The story is a wonderful part of Terrebonne Parish’s history. We just wanted that memory preserved.” Linda quoted family members from the ceremony that she said was a beautiful and powerful statement; it was the funeral they never had.