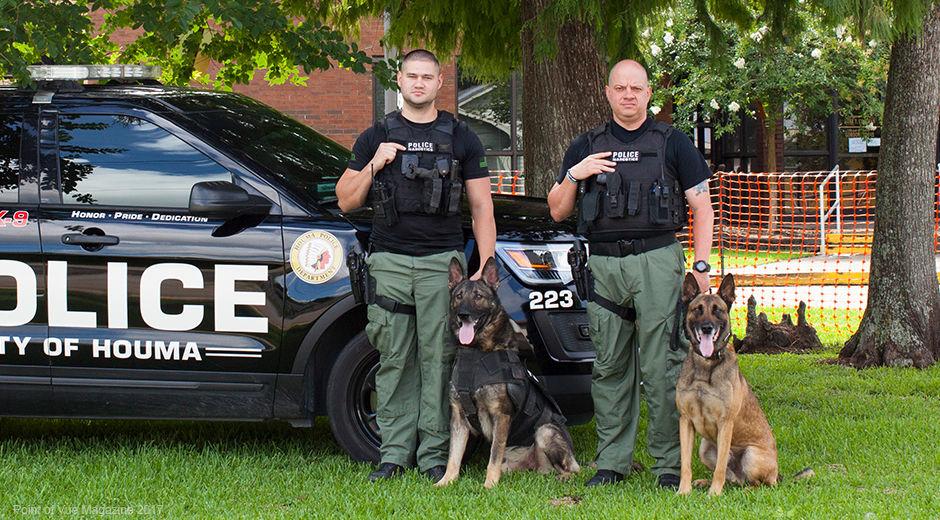 K-9’s are a very unique part of police work. The Houma Police Department’s dogs, Gunner, a Belgian Malinois, and Falko, a German Shepherd/Belgian Malinois mix, are dual-purpose dogs both nationally certified in narcotics detection as well as patrol functions, such as handler protection and suspect apprehension.

“Our dogs do more narcotics detection than anything else because of the growing narcotics issue we are having throughout the country,” Jeff explains. “If people are hiding drugs in their vehicles, hotel rooms, or in their luggage, they often deny consent to search. If the K-9 detects the drugs, we can then search on probable cause. Having a dog is just another level to be able to combat the narcotics war around here.”

Falko was granted to the Houma Police Department in 2013 by K9s4COPs, a Houston-based foundation that donates dogs to different agencies around the country. Corey spent two months in Houston training to work with his new partner. HPD was the first organization in Louisiana to receive a dog from the foundation.

Jeff has worked in narcotics his entire 22 years with the police force. He describes having the dog by his side as another tool in his tool belt to complete the work that must be done.

“It’s fun but demanding,” Jeff shares. “The training is constant, for both of us. We train about 16 hours a month, just formal training. We train together [with other police departments] every Tuesday. When we have down time, we take the dogs and we work with them several times a week. You want to be sure that when the dog hits, and if you’re going to be searching someone’s stuff, you’re confident there’s a reason.”

Outside of their daily police work, the dogs and handlers enjoy participating in community events. They enjoy going into area schools and allowing the children to see what the dogs do.

“It’s a great way to familiarize the children with our work,” said Jeff. “It helps to make us more approachable. We try to effect the community in a positive way.”