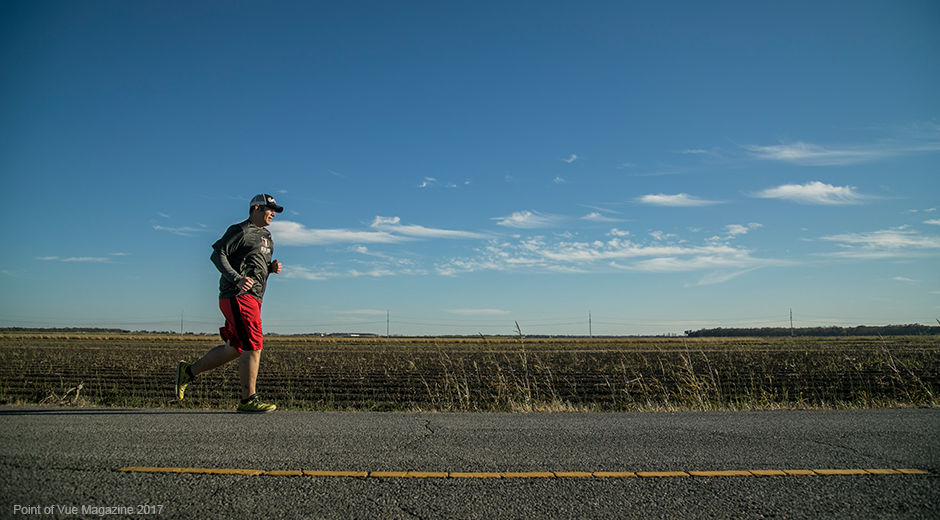 Just after the 2018 New Year’s Day, gym traffic will surge with resolution hopefuls. For Schriever resident Jason Harper, exercising and dieting is not just for the month of January, but a continuous journey that leads to a healthier, longer, and happier life. He has four tips, gained from personal experiences, for anyone who wants to walk or maybe run down a similar path.

“If you’re serious about changing your health in a sustainable way, you have to know why you are eating what you are eating,” Jason says, “Just blindly putting in food because the internet tells you it’s good may look tempting, but ask why is it working and what’s it going to do.”

Previous to 2015, the year Jason started his now roughly 100-pound-weightloss journey, he struggled to find the right diet and would gain back any weight he lost. In June of that year, when a picture of him with his youngest son was taken, Jason finally saw himself as morbidly obese and knew he had to find a diet that would stick. He started off doing a low-carb diet and was losing weight, but had no energy to exercise.

After seeing his good friend, Dan Cabirac, lose weight, Jason met him for lunch to pick his brain about his diet. Dan told Jason about his plant-based diet. Intrigued, Jason began researching vegan diets which he would begin himself a year later and continues to this day.

Surround yourself with people who support your goals.

“Surrounding yourself with people who support you and not hinder you is super important,” says Jason, “If there was someone in my life who is constantly telling me I won’t make it or what I’m doing is not sustainable, I’ll probably work myself away from that person.”

Dan introduced Jason to Josh LaJaunie, marathon runner and creator of the Missing Chins Run Club Facebook group. Jason joined the Missing Chins as he saw it was a safe place for guys who were obese that had aspirations to lose weight and gain information without opening themselves up for ridicule. Although the group, which has lost a collective total of over 4,000 pounds, is composed of men trying different diets, they all share the common goals of trying to lose weight and running.

Jason says he’s been very blessed to have a family that gives him endless support. His wife, Heather, has been with him every step of the way. She has embraced his lifestyle and is responsible for cooking his vegan meals. Jason’s work family at Chic-fil-A makes sure to include meal options for him at potluck dinners and not hassle him even though he eats the same exact salad everyday for lunch.

Find tough goals. When you obtain those goals, find new ones.

That lunch with Dan in 2015 not only got Jason to consider trying a plant-based diet, but also got him more focused on running. Dan challenged Jason to join him in the Jazz Half Marathon in New Orleans that October.

“In about four months, I went from sitting on the couch to finishing a half marathon,” Jason says. “It took me forever to finish it, but I finished it. That was the beginning of my running journey.”

Being close to 300 pounds when he ran that first half marathon, Jason fractured a bone in his left knee during the race. He ran with pain for months after that and still signed up for other races. After another half marathon, the doctor told him no more physical activity for at least a couple months.

After the required rest, Jason continued. In March 2017, he finished his first full marathon. At that race, he signed up to do it again for 2018 and has another half marathon in June. He even ran in the 2017 Heavy Half Marathon in Leadville, Colorado, which he described as the hardest thing he has ever done in his life. The course is 7.5 miles uphill and 7.5 miles downhill.

“That race I legitimately wanted to quit 5 or 6 times,” Jason says, “I had to talk to myself to keep going.”

“For me, it was my kids, the biggest Why I could possibly have,” Jason says, “I didn’t want my kids to be without a father. I lived my whole life wanting to be a dad and fatherhood didn’t come until later in life for me. I was 35 and 38 when my kids were born.”

At his peak, around 360 pounds, it hit Jason that he needed to lose weight so he can experience moments with his kids such as graduating and getting married. As a kid in Pottstown, Pa., he saw being big as a positive from his father who was a very large man but was happy and beloved by the people around him. Unfortunately, it contributed to a lot of health problems for his dad, who passed away nine years ago. Experiencing first hand how the weight can affect a parent you love, Jason is changing to stick around and look after his kids, the big Why for him.