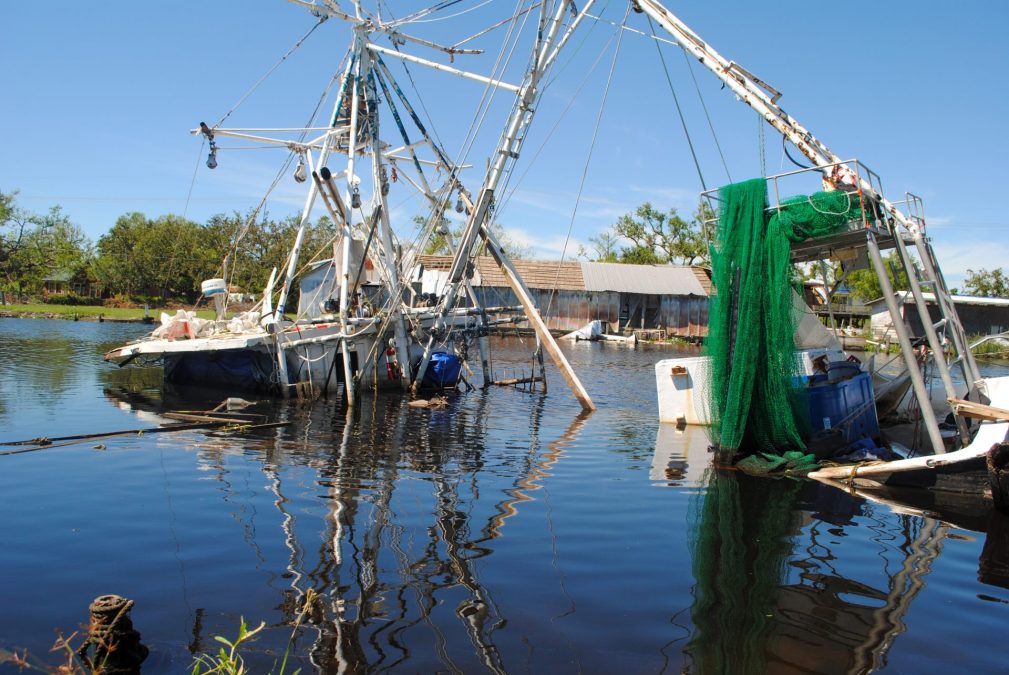 Resiliency comes in all shapes and forms, but no one comes together during hard times like Louisiana Cajuns. After Hurricane Ida hit the Gulf Coast on August 26, 2021, its people immediately went into rebuild mode and haven’t stopped since then.

Jonathan Foret wears many hats and one of them is being President of the Helio Foundation. The foundation began initially with the simple mission of serving the underserved. Mom’s Pantry came to fruition at Nicholls State University and select elementary schools. The main objective of the program is to provide food for students in need. Guidance counselors in the participating schools help identify students in need and Mom’s Pantry gives snacks to take home. Mom’s Pantry was the main objective with the Helio Foundation until Hurricane Ida was chugging its way towards home.

Before the storm hit, Jonathan had a conversation with the foundation’s Executive Director, Reagan Creppel about the potential impacts of the storm and if the organization would consider using Helio as a part of relief efforts. After the storm passed, they saw the destruction that had been left behind by Ida. In the middle of trying to clean their own properties and making sure it didn’t rain in their homes, they realized they needed to try to do more for the people who have lost everything. This brought on the idea of starting fundraising efforts.

A mutual friend connected the foundation with Baton Rouge based Mimosa Handcrafted. The company is an employer of 11 full-time employees including owner Madeline Ellis and her husband Dawson. Madeline was born in Thibodaux and lived in Houma as a child, and although she moved away young, she still was up and down the bayous with family. The company designs and casts their pieces in-house which started as an after-work hobby but has since grown into a full-time gig for the owners. Madeline says that they sustained little damage from Ida, but watching friends, family, and neighbors go through the aftermath, moved them to try to help as best as they could. When looking for a non-profit to donate to, they knew they wanted to support a smaller non-profit organization and wanted it to be someone they can trust. She asked a friend, Heather Guidry from Vacherie, who just so happened to have graduated with Jonathan and sat on the Helio board during the organization’s first year.

Mimosa Handcrafted owners wanted to be able to donate 100 percent of  proceeds to relief efforts. Although they wanted to be on the ground helping with recovery, they knew fundraising would be their way of helping. They chose an ASL I Love You pendant necklace, besides being the best sentiment, it was a small piece that could be mass-produced. They started with 200 pieces which sold out within an hour, so they decided to up the production to 2,000 pieces. They were surprised to find out they sold out of those within 48 hours! Their relief efforts were able to raise and donate $50,000 to the Helio Foundation to be given directly in the hands of those who need it. They also were able to donate $1,200 to bayoufund.org. Alongside the monetary donations, they hosted a collection drive for donations which led to being able to fill a flatbed trailer with supplies they delivered to the Helio Foundation in Point aux Chene. When they sold out of the ASL necklaces, they switched their overall site donations so that 1 percent of all sales made on their website goes to the Helio Foundation through the end of 2021. Madeline says that she wants residents to know we’re all in this together, “You are not alone and you don’t have to do this alone. If you need help but aren’t sure where to start, contact someone at the Helio Foundation. They are literally looking for people to help. There are also so many people who care and want to help but aren’t sure where to start or how to do it, groups like Helio are the connection point on both sides.”

The foundation has been receiving funds from multiple sources including Hancock Whitney Bank, The Greater New Orleans Foundation, and a GoFundMe account started by Chauvin native Melissa Martin who grew up with Jonathan. Melissa owns The Mosquito Supper Club, a farm table restaurant in New Orleans where she was inspired by her roots in Chauvin. She also published a cookbook, “Cajun Recipes from a Disappearing Bayou” that is sold worldwide. After Hurricane Ida hit, she went home to Chauvin to help her parents where she spent many nights without electricity. She says the devastation was nothing like she’s seen before, “my house has flooded many times down the bayou growing up, but this was something that was very different.”

She wanted to find a way to help her hometown in a way that can use her brand positively because she says she felt as if she was using up her parents resources while in the area.  She has an amazing networking skill that has managed to propel fundraising to new heights for the foundation. Melissa gathered contacts in her network, connected them to the Helio Foundation, and started bayoufund.org which has raised more than $500,000. Jonathan says Melissa’s restaurant and her cookbook all have to do with where they grew up. “It’s about the recipes of family, about catching shrimp on your family’s boat. We both grew up with the same experience and we both had a very strong sense of place when it comes to Chauvin in particular, but also the bayou region.” He commented on how it has been great to reconnect with her because she has been able to engage her networks along with her family. Her brother, Lee, has also been able to create creative campaigns and her sisters, Maria and Mallory, have been able to add creative insights to the efforts as well. “They’ve really stepped up to the plate and been able to help their hometown. It’s been really rewarding to be able to work with them,” he says.

There was an immediate need following the storm for people to be able to begin recovery. Other organizations, such as FEMA, take time to go through the process, but the foundation recognized residents needed help now rather than later. Residents didn’t have electricity, internet, cell service. The foundation was able to use donations as $400 mini-grants that were given directly to residents. Jonathan says it has been hard because many of the residents are displaced because their homes have been destroyed. The foundation also wants to expand in other ways to help such as laundry services. They have also developed new partnerships after Ida hit, including Operation Airdrop. Through Jonathan’s work with the Wetlands Discovery Center, he befriended folks in Colorado that worked with the center to develop and produce educational programs that take place in elementary and high schools. This partnership led to an introduction to someone in Colorado who flies a plane for Operation Airdrop. Jonathan describes the program as the Cajun Navy, but instead of boats, they have airplanes. The group flew supplies to the foundation three days after Ida. Jonathan says they are so grateful because they simply didn’t have access to the type of supplies needed in the beginning such as diapers, formula, and feminine products. Another specific shortage they had was 200 amp electrical boxes. When poles and trees fell during the storm, they pulled service lines out of people’s homes. This problem led to houses not receiving power despite their neighbors being restored. The 200 amp electrical boxes were scarce along the coast, but Operation Airdrop was able to gather one hundred of the electrical boxes to the foundation so they can help to get power back to these homes.

Disaster Recovery was not a part of the foundation’s original wheelhouse, but this has been something that Jonathan says they learned organically, and as they go forward, as they find out what people need and how to fulfill those needs, Jonathan says he believes they get better at relief efforts as the work continues. They will continue to provide Mom’s Pantry because it is important especially as schools open. He says anyone who has access to resources should be engaged in helping build our community back to help make it better. He says that the time is now to help build our community back, “We have an opportunity, even though it’s so hard to see that opportunity right now. It’s just so hard right now, but we are going to have the opportunity to do things a little bit differently which will end up lessening our vulnerability to the risk that is going to come with future storms because this isn’t going to be the last one that we deal with. That’s the reality of living on the coast in Louisiana, we always have hurricanes, and we’re good at them…but this one is hard to bounce back from.”