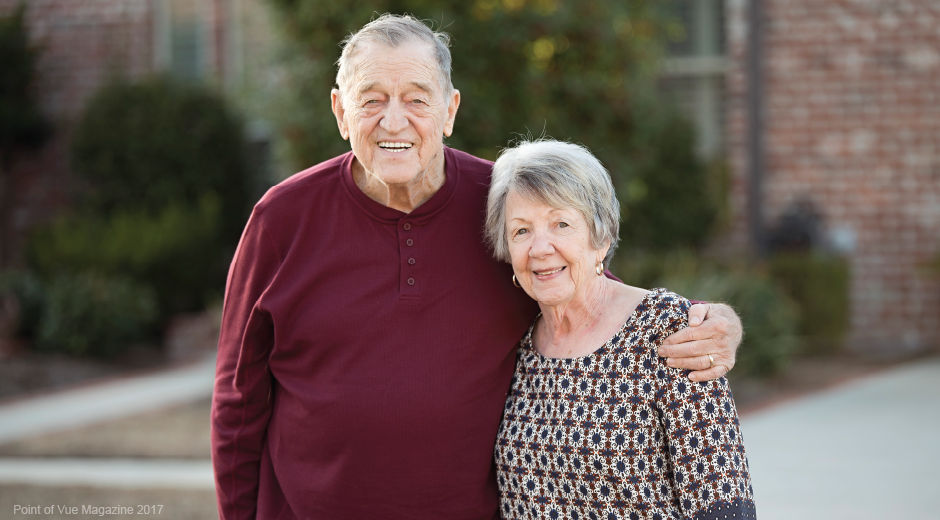 A wedding day highlighted by the disappearance of the groom to watch the Cleveland Browns play in the NFL Playoff Bowl during the reception seems like an unbelievable start to a marriage. For Houma residents John and Gretchen Clune, though, it is how the story of an unbreakable 57-year-long partnership full of laughter and love begins.

“He disappeared with the car,” said Gretchen. “I asked somebody where he went and they said he went to get the car washed. He was gone for like three hours.”

“I got the car washed five times, just the length of the football game. The Cleveland Browns were playing for the championship. It was the only way I could get to see it,” laughed John.

An Irish immigrant living in Brooklyn, N.Y., John found his way to Louisiana through basketball. He moved to Baton Rouge after his service in the Korean War when LSU offered him a basketball scholarship. It was there that he and Gretchen, who grew up in New Orleans, met in an unusual fashion.

“I was working at LSU in the registrar’s office. He was a student, and he had to come in and sign for the GI Bill on the first of every month,” said Gretchen. “He would agitate me. He would hide the pens and put them down on the floor and say, ‘I need a pen to write with,’ and I’d get fussed at for not putting the pens on the counter.”

“I thought it would be fun,” said John. “She was a pretty girl.”

John eventually asked Gretchen to accompany him to a party, but Gretchen was hesitant, as she did not know him well. After hearing from her boss that John was a nice man, though, their first date became a reality.

“This time I was working in the admissions office, and he came in,” said Gretchen. “He was looking at all the artwork on the board, and my boss comes up to me and she said, ‘Does he really like the art?’ He just kept looking at the pictures, and then he asked me would I want to go to a movie [with him].”

“[My sisters] all thought I should get married,” said John. “I fell in love with her. She’s my kind.”

A year and a half after they began dating, the pair married in Baton Rouge on January 7, 1961, and spent their honeymoon in New Orleans. They moved into their first home in Baton Rouge shortly after.

“I didn’t know he [had been] wearing his friend’s clothes. He had one little box of stuff to put in the apartment, so his sisters took him shopping,” said Gretchen.

The years to follow would be full of close companionship, to which they attribute the success of their marriage.

“We go everywhere together–to the store, to go shopping. We enjoy each other’s company. That’s been our success all these years,” said John.

From attending LSU football games, to traveling to avid runner John’s races, to simple trips to the grocery store together, the pair has been inseparable since their early days of dating. Their best memories involving each other center on their impromptu trips to New York.

“We had two great jobs. I could go to my boss in the morning and say, ‘Look, I want time off. We’re going to New York.’ She could go to her boss and say ‘I’d like to go to New York,’ and we would leave spur of the moment for New York,” said John. “We would talk about it at breakfast, and that evening we were on our way.”

Adjusting to John’s extremely Irish family proved to be a bit of a challenge for Gretchen along the way, which John recalls as some of their funniest memories together.

“My mother had a habit. When you were finished eating, she walked up to your plate, picked it up, filled it up again and brought it back,” said John. “[Gretchen] hardly had an appetite.”

“For marriage to be successful, you have to trust,” said John. “You’ve got to believe in the person you’re married to.”

“We tell our kids that you’ve got to make the best of [marriage],” said Gretchen

The pair also believes that faith in God is the key to maintaining a strong household.

“You’ve got to keep God in your home. That’s one of the key factors,” said John.