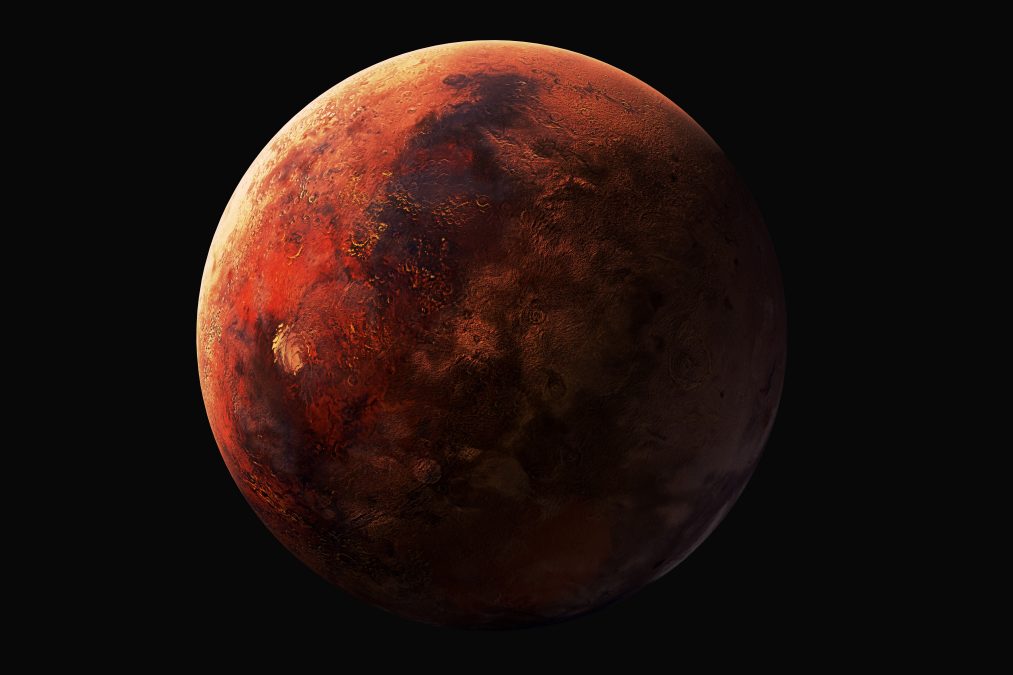 In mid-February, NASA landed its latest rover, Perseverance, on Mars. Among Perseverance’s jobs on the Martian surface is to search for signs of past or current life. For this, it carries ground-penetrating radar, an oxygen generator, a mini-helicopter, environmental sensors, a bunch of spectrophotometers, a couple of lasers, 19 cameras, and two microphones. Together with other landers and hardware from a bunch of countries, it’s getting kinda crowded over there. Following 2012’s Curiosity, Perseverance is no less than the fifth little rolling vehicle that the U.S. has landed on the planet. As Jimi Hendrix famously sang, “Move over, Rover!”

And that’s not likely the first rock lyric that comes into the minds of PoV readers when they learned of Perseverance’s successful landing. Instead, that lyric is probably from David Bowie’s 70s hit, “Life on Mars”: Sailors fighting in the dance hall / Oh man! Look at those cavemen go / It’s the freakiest show. // Take a look at the lawman /Beating up the wrong guy / Oh man! Wonder if he’ll ever know/ He’s in the best-selling show / Is there life on Mars?

But Bowie’s 50-year-old song is really not about Mars. Critics of the time called it a metaphorical masterpiece, which is a smart-aleck way of saying they don’t understand the words. Some believe that the song criticizes how pop culture and movies direct modern life. Some believe it’s a generational plea for finding escape from reality. Whatever it is, it reminds us that people have been curious and concerned about Martian life for some time. H.G. Wells synthesized much of the late 19th century’s Martian terror in his novel, The War of the Worlds.  Orson Welles, Tom Cruise, and a slew of other Hollywood earthlings perpetuated the fever.

Perhaps to reduce that temperature, NASA put microphones on Perseverance to enhance Martian reality for us. Luckily, those audio files survived their 11-minute transmission back to Earth. After waiting with nervous eardrums to hear what music cryptic Martian life forms are making from their crusty home, however, I’m still waiting to hear those “rock” songs. To me, the slight howl of Martian wind pushing past the microphone head, crackling every now and then as red, wind-blown grains slam against it, reminds me of hearing breeze and sand in the grainy audio of old films our family took on visits to Grand Isle. The only difference is the absence of Mom screaming to us as we walked out of the waves, “Pull up your bathing suit!”

Some people say that, if you listen carefully, the recorded Martian wind-blowing is actually the same soundtrack of breaking waves at the beginning of “Riders on the Storm” by The Doors. Others faintly hear the opening guitar riff of The Eagles’ “Hotel California.” Someone reported hearing “Mars and Venus” by Paul McCartney and Wings, but that was probably just Ringo. Still others insist they hear Tom Jones in the distance, singing “It’s Not Unusual,” as he did to end the movie, Mars Attacks! Admitting what you hear in these Martian tracks may get you a few snickers from disbelievers. Snickers, however, are the same caramel, nougat, and milk chocolate found in Mars candy bars. So, let those cavemen go! They’re the freakiest show.

We estimate that life on Earth began about four billion years ago. What if similar life started on Mars eight billion years ago, and, as it was going extinct, technologically intelligent forms sent a probe of microbes to the closest habitable planet—Earth—to hopefully restart the four-billion-year process? What if with rover landings we’re trying to repay the Martian gift? Is that humanitarian? Martianitarian? A good script for a movie? The best-selling show?

Science fiction writer Ray Bradbury, enamored with the Red Planet, wrote the short story “Mars is Heaven,” another metaphorical masterpiece from an earlier decade. But even that story suggests something other than life. Why do we want or need to know if life can or did exist on Mars? Because, like Bowie, all the young dudes need a hunky-dory place to escape? Because it’s the only place besides Texas and Mississippi where you don’t have to wear a mask? Or maybe because it will answer one of the most asked, lyricized, movied, and short-storied questions of humankind. When I watch NASA’s high-resolution images from Perseverance’s 19 cameras and see an old, burnt landscape, I can’t help thinking of all the dreams and science and movie plots and tax dollars that’ll be dashed if our high-tech fails to find anything. Mars again would become nothing more than the place that Wells and Bradbury fictionalized, that place never visited by Abbott and Costello, Robinson Crusoe, Flash Gordon, or any other human. Yet, I hold out for some signature of life, some tiny, fossilized sphere of perchlorate-reducing bacteria, or, at very least, Matt Damon. Holding out? Some might call that perseverance. POV