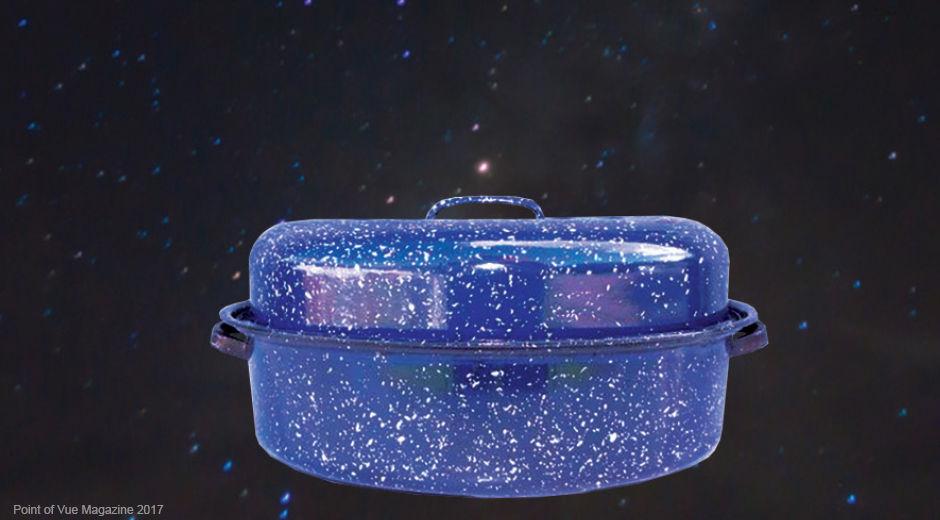 In the past seven weeks, we’ve survived the three major holidays of the year. I call them “the Big Three”: Thanksgiving, Christmas, and New Year’s. And on each of those days, we’ve probably all prepared large meat items in our kitchens—a turkey or a ham or a beef roast or something more exotic, the antlers of which are proudly displayed in some other room or “cave” of the house. Some, like me, prepared these masses of animal in our ovens in a covered steel pan enameled in a dark-color and spotted randomly with small white dots.

The dark-enameled, white-dotted pan and cover are better known as graniteware. Enameled cooking pans and pots like modern graniteware have been around for a long time, ever since the days when Ben Franklin ruffled feathers over trying to name the turkey the national bird of the United States. So, when we talk about “holiday traditions,” we’re actually talking about more than the recipes for side items we inherited from our grandmothers.

When you’re preparing big meat for the Big Three, you gotta wake up early, of course, because those masses of muscle take hours to cook. Like many of you, I was up earlier than normal on Thanksgiving morning and suffered for a while groggy-eyed and caffeinated. There’s something about handling cold meat on a cold morning, however, that’ll make your hands rudely wake up your brain. As I began unwrapping that defrosted 24-pound gobbler to set it into the graniteware pan, my eyes came to focus and my brain came to make logical connections for the first time since setting the alarm on my phone the night before. It was then when I saw how the enameled pan, with its dark blue background and randomly placed white dots, resembled what I saw out the window just before I went to bed a few hours before.

On a clear night, our nighttime sky is a big graniteware pan. It shows us random bright dots amid a dark background. What we’re actually seeing are just a few of the brightest stars nearest Earth. What we don’t see is the incredible dusting of billions of faraway stars deep into the dark blue enamel that slowly spiral around the black hole that spins our own Milky Way galaxy. And beyond that, we don’t see the collections of billions of other milky ways and their constituent stars spread across what we know of the universe.

So, for the first time in decades of holiday cooking in the early-morning kitchens of all the generations of maternal figures in my life, I saw the universe contained in the oval bottom of an enameled turkey-baking pan. I also saw the opportunity to share this remarkable epiphany with holiday guests who would arrive hours later.

For what seemed like light years, I held the turkey over its waiting pan until I figured out how to do what I wanted to do. Fortunately, in the kitchen cupboard were food coloring and cake decorating supplies. I washed my hands. Using the yellow cake decorating tube, I soon started connecting the white dots on the turkey pan bottom into familiar constellations, like the Dippers and Sagittarius. Not decorative enough for this epiphany, I illustrated in a palette of colors giant ringed planets, solar systems, spiraled galaxies, a couple of exotic nebulae, and even a Jules Verne-era spaceship. This would be the best turkey ever!

Tradition is powerful—especially food tradition. It’s funny how a familiar food in an unfamiliar color is totally unappealing and thus inedible. It’s the very reason why someone invented browning sauce for microwaved or crock-potted slabs of meat. It’s the very reason why purple ketchup didn’t last for more than a year. And it’s the reason why we ended up having Popeye’s chicken for Thanksgiving.

So, on this past New Year’s Day, I served ham—a spiral-cut one with a bone in the center instead of a black hole. On top, I placed pineapple slices around toothpicked cherries. It looked a bit like a bunch of Saturns, and that was enough for me. For the guests as well.