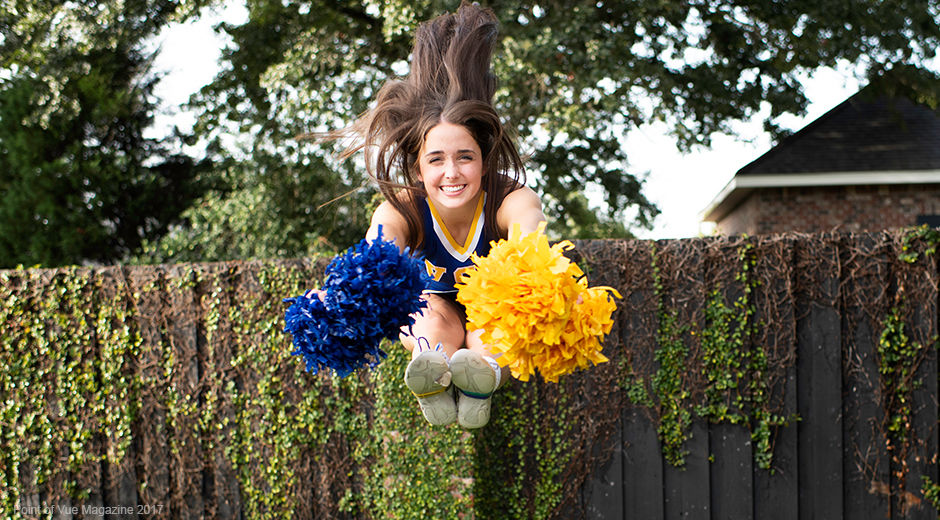 by Emily B. Rini
Point of Vue

All these things are par for the course for any aspiring elite athlete dedicated to their sport. Even more so for the unexpectedly intense sport of competitive cheerleading. We’re not talking about a practice once or twice a week, and then cheering at the pep rally and football game. Although that can be part of it, competitive cheerleading is so much more than that. In fact, you can tune into ESPN on any given weekend between November and May to view various competitions at ESPN’s Wide World of Sports in Disney World. Then you’ll get a small taste of what this evolving year-round sport now entails: getting judged and scored during pre-lims, semi-finals, and finals on hard-hitting dance routines, tumbling, and aerial partner stunts, just to name a few.

Sydney Schwab knows a thing or two about all of the above. Starting out in competitive gymnastics at the age of five, she switched gears to competitive cheerleading at the age of nine. Sydney has since dedicated herself to the love of the sport, finding joy in both the game-day and competition sides of cheerleading.

Competing on the All-Star team at local gym JAG from fourth to seventh grade, and then with LA Sports Gym in eighth and ninth grades, Sydney has had the opportunity to compete nationally as well as internationally. She was even a member of Houma’s first and only Level V team to place at Nationals and go on to compete at the U.S. All Star Federation’s Cheerleading Worlds, a competition including opponents from as far as Canada and Japan.

Now as an academically accomplished senior at Vandebilt Catholic High School, the first five-year VCH Competition Cheerleading Team member, and not-surprisingly, the Captain of both Vandebilt’s Varsity and Competition cheer teams, Sydney has shifted her focus from competing on the All-Stars team to leading her talented team at VCHS. Having been a part of this reigning Louisiana State Championship team since eighth grade, she has her eyes on the prize of winning State for the fifth year in a row and winning at this year’s National competition.

From the very beginning of her cheer career, however, Sydney has recognized that cheerleading is not an individual sport. “It’s all about the team. We’re all in this together. We have to have a close bond, because there’s so much trust involved with our stunts and everything else,” Sydney states. “We pray together before every practice and competition… It’s intense, serious, and sometimes a dangerous sport… so we have team retreats, go out to eat, and hang out a lot in order to build that trust. The girls on the team are my best friends.”

If “intense, dangerous, and serious” aren’t words you’d use to describe this sport, think again. As with any sport, it seems like it’s the ‘blood, sweat, and tears’ that separate the hobbyists from the champions. Throughout the years, Sydney has had two concussions, multiple broken fingers, knee injuries, and several stitches. Her most memorable injury happened at a national competition when she took an elbow to the face during a stunt gone wrong at a final practice. She got up, rushed to the ER in Orlando, got stitched up, and was back on the mat to perform at finals the next day.

Sydney’s mother and former Vandebilt Cheer Captain herself, Jeana Schwab, acknowledges the hard work and dedication Sydney has invested in this passion. “Cheerleading is so different now than it was when I was in school… I’m so proud of all she has accomplished. But especially that she has juggled everything while still excelling in her honors classes with a 4.0 last year. She gives 100% to everything she does: cheer, school, family, and friends. As a mom, that means a lot.”

Sydney isn’t the only one who has been dedicated, however. Jeana has spent countless hours driving to practices, traveling to competitions, investing in extra classes, and praying for the safety and sportsmanship of the team. “All the moms have formed connections and bonds, as well. We’ve all been together watching in the crowd throughout every season for so many years.” In fact, at one competition in particular during Sydney’s ninth grade year, Jeana remembers, “Their routine at pre-lims was a complete disaster, and a lot of it was due to Sydney’s stunt group… But they squeezed by and got to semi-finals. Then, I think the other moms were more worried about how I was doing during that semi routine than anything. Because it’s hard as a mom to see something that your child has put so much into come down to just a couple of minutes… It’s do or die. And when they all hit that semi-final routine perfectly, it was like nothing I’d ever seen. I could cry now. It was really incredible! You can tell when she’s out there, this is what she was born to do. And when you’re watching your children do something they truly love, there’s nothing like it.”

The competition bug seems to have bitten Sydney’s younger sisters, Josie and Julianna, as well. Josie, 11, has chosen to give up playing soccer in order to focus on competing on her All-Star Cheerleading team, and to eventually carry on the family legacy of cheering at Vandebilt. When asked about her favorite part of cheering, Josie smiled and said, “It’s definitely the friendships and bonds. We’ve gotten so close, it’s unreal.” And Juliana, 8, is a third year Level II gymnast who loves performing and competing in vault. She enjoys having Sydney as a sister because, “She’s nice and she helps me with my back handspring.” It’s obvious that the Schwab girls have built tons of character by performing under pressure, balancing obligations, and still helping and leading others along the way.

Sydney’s top tips on being a successful cheerleader could also apply to excelling in just about any aspect of life, “You have to be dedicated, you have to want it and want to be there. You have to be coachable and willing to change up what you’re doing if that’s what’s best for the team. And if you can go in with a positive attitude and have fun, that’s everything.”

As she embarks on her Senior year, and last year competing as a Terrier, Sydney hopes to finish out the year strong; and then decide if she’ll be an LSU Tiger or a UL Ragin’ Cajun. Either way, the future is bright for this one. 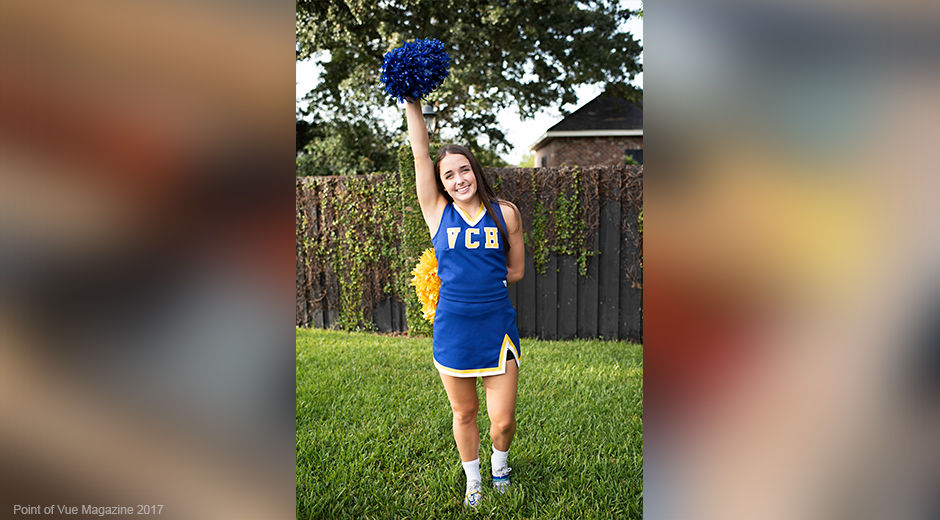 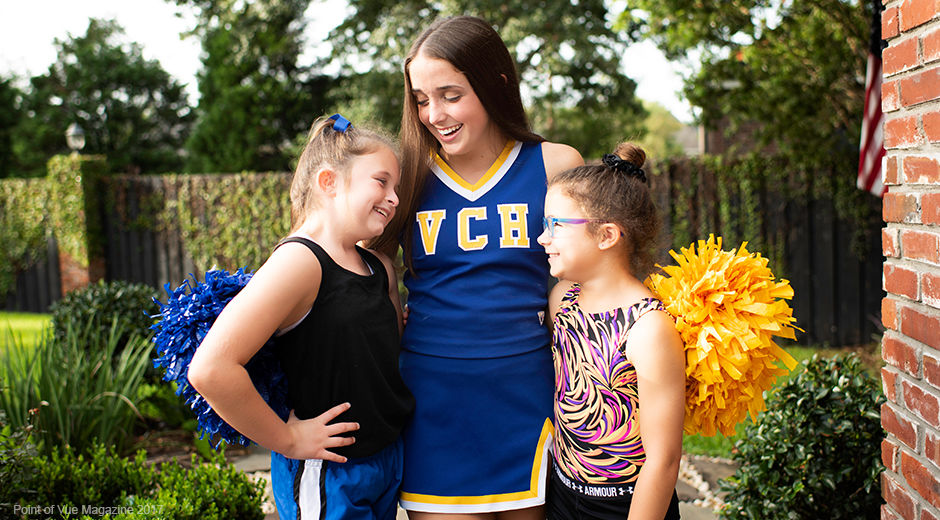