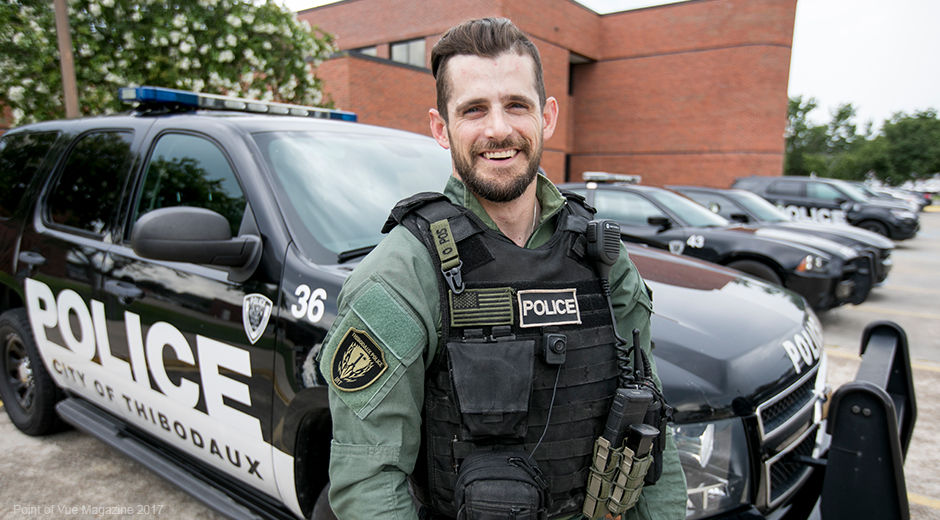 We often look towards numbers to define our lives: What GPA did I graduate with?, How much is my salary?, What is the square footage of my house?, How many cars do I own?, How many social media followers do I have?, etc.

Fortunately, for most of us, many of the numbers we seek to enhance deal with material possessions and not our actual wellbeing or mortality. Many have not had to ask: Will I live past the age the doctors told me?, What percent are my lungs functioning at?, What’s the odds of me surviving a double lung transplant?, How many months will it take me to recover?, etc.

Time, odds, and percentages are numbers Chauvin native and over 15-year law enforcement officer, Paul Thibodeaux, has had to improve for his health and survival. His self-motivation, family support, and love for his profession and life itself, help him persevere through the bleakest numbers.

Twelve – The age specialists told Paul and his family he wouldn’t live past.

He was born with cystic fibrosis–a genetic disease that causes an excessive buildup of mucus in the lungs, pancreas, and other organs. The disease is degenerative–causing lung infections and limiting the capability to breathe over time.

Paul received his first procedure at just two-days-old, when the disease caused a blockage in his intestine. The doctors performed an ileostomy, a surgical opening of the belly, on the young infant to clear the buildup.

“My parents decided they would let me do whatever a normal kid would do. So my doctors think letting me run around and play spots and all actually kept me healthier as a kid,” Paul says.

Living beyond 12-years-old, Paul stayed active in his teen years by joining the football and track teams at South Terrebonne High School. Although his lungs were only functioning at around 60% and he frequently coughed, he was still able to be productive in both sports.

Law enforcement always interested Paul. After a few years in college, he decided to take a semester off to see if he would like being an officer. He then joined the Terrebonne Parish Sheriff’s Office where he found his true calling.

“I was stuck…I love what I do. I can honestly say I love coming to work [now working for Thibodaux Police Department]. I love my job, the Narcotics Detective says.

One hundred and eight – The weight Paul, who is usually around 165 pounds, was at just before his first double lung transplant.

Because cystic fibrosis is a degenerative disease, it continued to weaken his lungs overtime. Not only did it get so bad for the then 32-year-old Paul that he was at 108 pounds, but also his lungs only had about 17% functionality. He also had to breathe from oxygen tanks for 24 hours a day while waiting for a donor, so he can receive his transplant.

He describes his thoughts before his surgery as a “weird combo.” He felt terrified to go under the knife but also happy because he knew he needed the procedure to survive.

“It’s scary because there’s a good possibility you’re not going to survive the surgery or you can reject the organ right after surgery,” Paul says. “They tell you the numbers and they’re not that great, especially for lungs. Lungs have the worst success rate because everything you breathe in from the atmosphere goes straight into that new organ.”

After the eight-hour surgery (May 30, 2015) that left Paul with a vertical scar down the middle of his chest and a little over two-week stay in the Ochsner Hospital in New Orleans, he started his recovery process. Three weeks after his surgery, he started walking two miles a day along the levee behind the hospital. Twelve weeks after his surgery, he was able to lift weights to get back in shape. He returned to work just eight months after the surgery.

Two — The number of people that had two successful double lung transplants at Ochsner. Paul was one of those two.

In January of 2017, a virus caused Paul’s health to drastically decline once again.

“You thought you were all good then all of a sudden you get hit with something like that,” he says on becoming ill again. “Nothing they did helped; It kept dropping. It’s very hard to go through. You just see yourself going down and down and down.”

During his heart echo test, in the summer of that year, complications arose during the procedure when the port in his chest (placed in for a process called photopheresis) was compromised. That leaked air into his chest, which collapsed both of his lungs. Doctors were forced to put in emergency chest tubes. That incident put the young police officer in the ICU for two days.

After his tests, he went to the top of the donor list, which still had him waiting for five weeks. While waiting, his lung function went down to 12%, and he had to breathe from oxygen tanks once again. He couldn’t sit down and watch TV without being out of breath.

“You feel like you’re suffocating and you’re in a room full of oxygen,” he says.

On August 2, 2017, surgeons completed a second successful double lung transplant on him, this time by a horizontal incision across his chest. He returned to the force just around six months after his procedure.

Being extremely self-motivated since he was a child, the now 35-year-old Paul works out six days a week by lifting weights and doing CrossFit. Thanks to his determination, positivity, and desire to stay active, he’s the healthiest he has ever been.

“You got to think positive and have faith,” Paul says for anyone going through recovery. “Whenever it’s time to recover, you got to do it. Nobody is going to do it for you.”