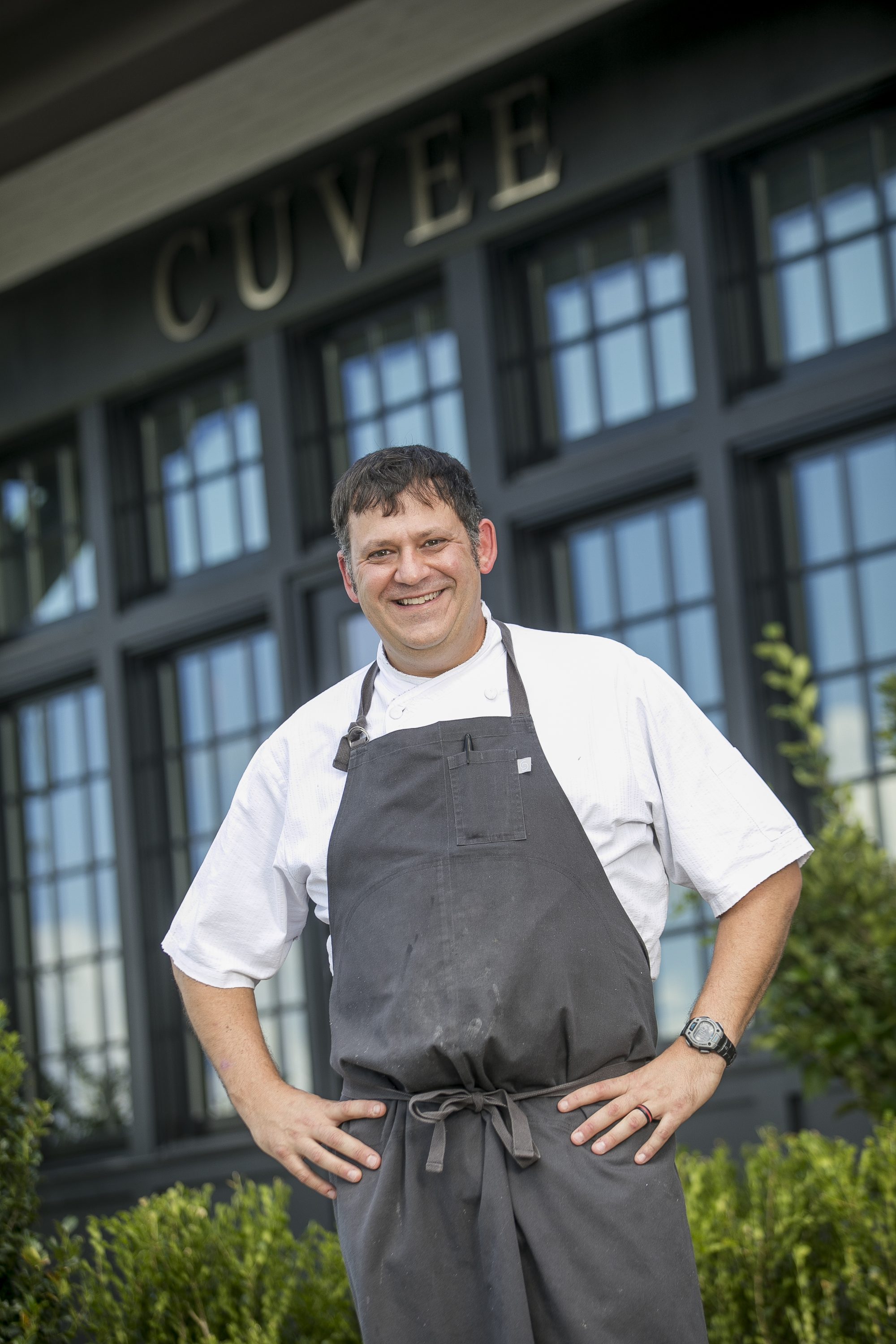 Chef Nathan Richard, executive chef and general manager of Cuvée Wine Bar & Bistro at Acadia Plantation in Thibodaux, holds all of these titles as well as volunteer firefighter.

A Thibodaux native, Nathan admits his journey to becoming a chef was a little unorthodox.

“My first career path was fire service, but my journey also took me to being an electrician and working in refrigeration. I always had a dream of becoming a restaurateur, but hey, I figured in order to do that, you need to know electricity and refrigeration to help out in a pinch in the kitchen. And you gotta know how to put fires out!”

Growing up as a kid, watching his dad do the cooking inspired Nathan. His dad showed him how to grow vegetables, how to fish and how to really cook based on what you had available. Nathan began his journey to becoming a chef at Commander’s Palace. Just as he was finding his place, Hurricane Katrina struck New Orleans, leaving Nathan, and most of New Orleans, without a job.

“After leaving Commander’s Palace due to Hurricane Katrina, I was highly driven to beat the amazing education I received there. I traveled to Italy where I worked with highly skilled butchers in Parma. That opportunity led me to France and then the Caribbean, continuing my learning along the way. The chefs and restaurant families I built relationships with continued to push me down the road and back to Louisiana.”

Nathan spent close to another eight years at Commander’s before leaving again, this time to head to South Carolina. That’s where he discovered a passion for cooking other style foods, outside of the Cajun and Creole he was accustomed to.

He returned to the New Orleans area a few years ago and continued to work his way up to executive chef through working at several prominent restaurants in the city. His friendship with Dr. Jody Plaissance and his wife Dollie, now owners of Cuvée, eventually led to a conversation about what it would take to get Nathan to come back home and join them at Cuvée.

As executive chef, Nathan is careful to not box Cuvée Wine Bar & Bistro into one certain style of food.

“To me, it’s about two things. One, what does the customer want and what keeps them coming back. And two, what do I feel like cooking,” Nathan laughs. “When you look at all the different types of cuisines in the world, Louisiana is the only state that cooks a certain type of food: Cajun Creole. If you look at, say, Mississippi or Alabama, they cook Southern food. New York cooks Italian. Louisiana has its own cuisine. Out of respect for that, I stay within those lines on my menu. I mix the different influences from the different regions, but still stay true to the heritage.”

A part-time instructor at the John Folse Culinary Institute at Nicholls State University, Nathan also wants to help culinary students learn more about their chosen career path, just as he did.

“I want to make [the restaurant] a place where Nicholls students can come in and continue their education. I want to be able to teach them the things they can’t learn in a classroom. I want them to be able to complete their internships right here in Thibodaux, to have the opportunity to be able to create their own paths. I want this kitchen to be theirs too.”

Nathan continued, “I want them to be proud, to come up with dishes on their own. It gives them the opportunity to say ‘this is my dish, here on the menu. I created that.’ That pride and support can go a long way.”

Cuvée opened their doors to patrons in mid-July. Despite the challenges that came with attempting to open a new restaurant during the COVID pandemic, Nathan believes the extra time gave him and his team the opportunity to plan things out more carefully and truly be ready for the moment they could open their doors.

“I believe that from something bad, always arises something better,” Nathan said. “It gave us the opportunity to perfect what we wanted to provide to the community.”

When asked what drives him to continue in the field, Nathan smiled and replied, “Creating food memories. People will still tell me they remember certain dishes I created at restaurants along the way. That’s what makes it worth it: making special dishes that people will forever associate with their special day. People remember food. It’s an amazing thing to be a part of.” POV