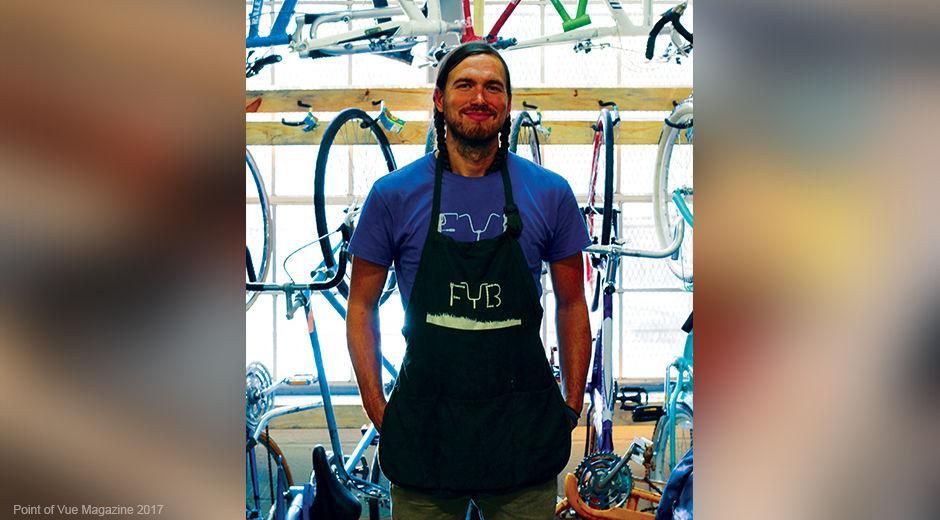 It’s a couple of minutes past noon on a Wednesday. Kids excitedly knock on the front doors of a South Baton Rouge bicycle shop. They eagerly wait for Mr. Dustin to arrive and let them in, so they can begin their day at Front Yard Bikes.

Mr. Dustin returns from his meeting and opens the doors as the young ones rush in to grab bikes they have been working on or to claim a new one to fix. He takes control of the room by gathering the kids in a circle and plans out the day with them. Yes, they will have a chance to fix their bikes in the shop and afterwards ride them in the backyard park, but the first hour is the cleaning hour. They must first help put bikes on the racks, pick up parts, and put away other donated items such as school supplies. The motto of Houma native Dustin LaFont is “work first, play second” and the community of Front Yard Bikes embraces that motto.

Dustin attributes much of his work ethic and ability to work well with young people to his mother. He said as a principal at Pointe-Aux-Chenes Elementary, she looked at the positive aspects of individuals and pointed it out to them; people trusted her as a mentor. Whenever flooding damaged the school and parish funding was low, she took the initiative to clean it out and keep it going. That trust has carried over through her retirement and influences her children to this day.

Back at the shop, kids begin to tune up their bicycles, which they get a $5 an hour credit that goes to them earning the value of the bike. Dustin balances between helping them, overseeing the work being done in the facility’s new kitchen, and talking to customers and donors. He has a lot on his plate from this program that started with one kid from the neighborhood who needed a bike repair, seven years ago.

Dustin, who taught himself how to repair bikes after the bike he rode to campus everyday started breaking down, was part of the volunteer organization, The Baton Rouge Garden Alliance. Another member of the alliance asked him to fix the bike of a kid that lives in the same neighborhood as Dustin’s rent house. As Dustin sat on the front porch of his house he heard a sound he described as “a wagon being dragged with no wheels.” Then 10-year-old Rejay Wilson walked up with a bike with no tires, no inner tubes and busted spokes. Unfortunately, that bike wasn’t able to be fixed but Dustin came up with an alternative that would grow to become the basis for what Front Yard Bikes is today. He had an old bike that his roommate gave him and told Rejay if he could fix it with him that he could keep it.

After they fixed it, Dustin thought it was over, but the next day some of Rejay’s siblings showed up, eager to learn how to fix bikes too, and the word eventually spread. That summer 10-15 children from the neighborhood often showed up to his front yard wanting to learn mechanics, ride their bikes and a place that was safe to visit. People in the community began donating bikes to his front yard as the non-profit organization began to form into what it is today.

A year after it had started, Dustin’s landlord started threatening eviction because of the liability of the kids working with tools. Dustin was forced to temporarily shut down the maintenance part of the program. That same landlord had a change of heart a few months later after he saw the positivity the program gave local youth as Dustin continued to take kids on bike rides to local businesses, museums and libraries. He made sure Dustin got his insurance and let him rent one of his warehouses. Dustin and the young ones in the community worked in that warehouse with no electricity, water, and installation for two years until they moved into the larger facility that they are located in today.

Hannah Kador, a staff member of Front Yard Bikes since June, hands out pizza to the kids outside in the park around 2 p.m. In the gated play area, children play basketball on the full court, ride their bikes along a paved path, and talk to each other while eating the food and drink provided to them on the vibrant painted bleachers. It’s a safe place for this community to have fun after the hard work they put in.

Even though Hannah has only been with the organization for a few months, she has noticed the uplifting impact Front Yard Bikes has had on this South Baton Rouge area.

“It’s broadening their minds,” she says, “It gives them things to do and keeps them out of trouble. People will say it’s a bad area, but these kids aren’t bad. This program helps them grow and believe in themselves. They know they can have anything in here if they just work for it.”

While studying history at LSU, Dustin became passionate about Civil Rights. “Baton Rouge has a lot of economic, racial and academic dividers. It’s different than growing up in Cajun culture where there’s mixed ethnicities and backgrounds,” the Houma native, says.

Dustin set out to create a community like the one he saw growing up, where he witnessed neighbors helping each other after hurricanes. He learned what a group of people can accomplish together through those experiences and the experiences he had going on church mission trips to El Salvador and Nicaragua.

At the end of their lunch break, the kids get to choose if they want to keep putting in time on the bikes they are working on or stay outside and play. Some stay outside and some rush back into the shop. On the basketball court, now 17 and a head mechanic for Front Yard Bikes, Rejay Wilson helps a kid with his bike outside. No one can probably tell you more about the effect this program has had than the young man it all started with.

“It has impacted everyone in the area, not just me,” he says, “I really look up to Mr. Dustin. He’s like a father figure.”

Rejay says he’d probably be in jail if it wasn’t for this organization. With the program’s help and Dustin’s guidance, he recently accepted a job with LSU’s maintenance department.

Dustin doesn’t want anyone to look at these kids as charity cases; they are an investment. He says they’ve contributed as much to the shop as he did. They helped build, paint, clean and garden.

“They are destined for greatness,” he says. “God made them that way.”

As the shop hours wind down, Dustin gives children still working on their bikes some extra time to finish up before closing. At the end of the day, some of their bikes still aren’t finished, but Dustin assures them he will help in finishing the repairs when they open the shop the next day. After all, they earned it.