You Are the Traffic

Home for the Holidays | Home of Rachel & Brian Bergeron 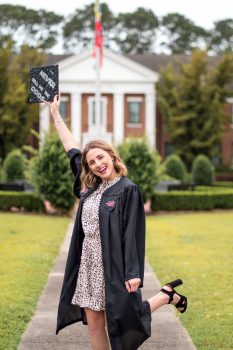 No, I’m not the name that usually appears on this column. I feel a little under-qualified to be writing this, if I’m being honest. I’m a freshly-graduated 22-year-old who can tell you the plot of all 23 Marvel movies from 2008 until now, but DO NOT ask me what a 401k is. I don’t know what it is.

Here’s what I do know, though: I’m not a fan of clichés. It would be easy for me, in the last POV issue of an absolute fever dream of a year, to go all “we made it through 2020” on everyone. It’s been a beyond challenging year, don’t get me wrong, but I think we’ve experienced 2020 firsthand long enough to know that to be true.

I did a few things this year, despite the fact that our ability to do things this year was limited. I celebrated my Taylor Swift birthday by allowing my friends to participate in a roast of me over Zoom. I finished my last semester of college online in the spring, saw my graduation ceremony rescheduled twice and finally walked across the graduation stage last month. I even wound up with my first real big-girl job.

I also listened to A LOT of music. Working from home most of the year gives you plenty of time to listen to hours and hours of every kind of music imaginable on Spotify.

Like most people, I love music. I think it has a way of conveying what we’re feeling when we don’t necessarily know how to put those feelings into words.

So, I started this year off by listening to a song that one of my favorite bands wrote a few years ago about the year 2020. The song is all about becoming comfortable with growing up and getting older. Kicking off the year with that sentiment filled me with a giddiness and hope for what the next chapter of my life would bring.

Fast forward to September and month seven of a global pandemic, and that same band released a new song with a very different sentiment, called “You Are The Traffic.” At its heart, the song is about how the only person stopping us from living our lives to the absolute fullest potential is ourselves. We ask ourselves why there’s so much traffic slowing us down, when, in reality, we ARE the traffic slowing ourselves down.

That song feels so poignant in the context of this year—a year where there was a lot of finger-pointing, a lot of blaming and a lot of lamenting cancelled plans.

It feels poignant because, somehow in the midst of it all, I saw so many people I love choose to step out of their own way and go after their dreams.

I watched my mom crush a new eating plan and workout routine to lose 50 pounds. I watched my older brother live his dream of turning an old hearse into the Ghostbusters car. I watched my younger brother come back from a brutal ACL tear last December to fearlessly play his heart out in his senior football season. I watched my best friend fulfill his dream of moving to Orlando.

Every day, I felt inspired by the people closest to me. Whether they consciously realized it or not, they discovered, somewhere along the way, that there was no one stopping them from going after what they wanted except themselves.

That made me realize something: how often have I blamed outside factors for my problems or shortcomings, when the only person slowing me down was myself? How often have we ALL done that?

It’s a hard pill to swallow, but a wake-call that we could all use. It’s easy to blame and point fingers; it takes courage to stand up and ask ourselves, “What am I going to do about it?”

We may be leaving 2020, but 2020 isn’t necessarily going to leave us. I pray that, as we move into 2021, we take what we felt this year, and turn it into something meaningful. Just look at the athletes who played every game this fall like it was their last. Look at the students who completed school online. Look at the young adults who started their dream businesses. They made something out of the hand they were dealt instead of giving up.

Don’t be the traffic in your life. If you see something you want changed, what are you going to do about it moving into next year? POV