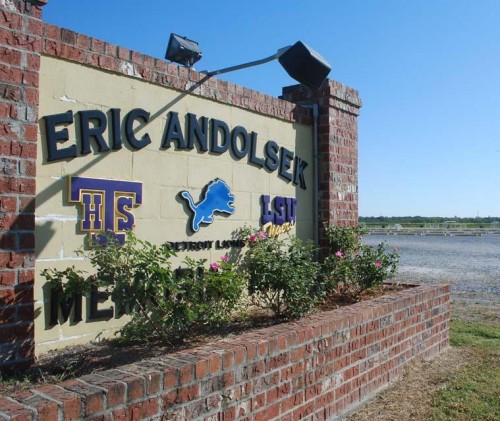 Thibodaux Mayor Tommy Eschete unveiled his much-anticipated plan to renovate the city’s recreational options last week, proposing $13.6 million in improvements and a half-cent sales tax to finance the cause.

“Our facilities are beginning, I think, to show their age and it is getting to be very expensive to maintain them,” Eschete said. “Some of them need to be replaced, like the rec center at MLK Park. That’s way past renovation.”

The decision to implement to the plan will fall to Thibodaux voters, who will decide whether they want to bump the city’s sales tax rate from 2 to 2.5 percent for a total rate of 8.5 percent within municipal borders.

Eschete said he hopes to see a tax proposition, which would dedicate the revenue strictly to “operations, maintenance and capital improvements” of city recreation, on the March 24 ballot.

The mayor said he’s pushing for the March election instead of the heavier-trafficked presidential ballot in November because he wants to propose it “as soon as I can.”

The state collects six percent from taxable purchases. The total rate in unincorporated Lafourche Parish is 8.7 percent, and it is 8.5 percent in Houma.

“We wouldn’t be out of line in the total sales tax rate as it applies to other areas that are very close to our proximity here in Thibodaux,” the mayor said.

The average household would pay an additional $80 per year, and the city estimates to collect $2 million in revenue annually.

The City Council, which would have to approve placing a sales tax measure on a ballot, did not voice opposition to the plan, and several local recreation leaders spoke in support of the presentation and said they would lobby voters on the city’s behalf.

“The key is here is a quality of life issue,” Eschete said. “Citizens of the City of Thibodaux either want a certain quality of life or they don’t. …It’s all about priorities and what people want to spend their money on.”

Scott Sanders, a former Major League Baseball pitcher and current baseball coach in Thibodaux, was one of several local coaches and recreational leaders in attendance. He said the new facilities would positively influence the city’s youth.

“Every one kid we lose in recreation, they are going to pull two back with them,” Sanders said. “Recreation is my life, along with a lot of other people in here that I see, and the bottom line is the more we keep these kids active in the right things, Thibodaux will keep in the right direction. The more we lose, the more trouble (Police Chief) Mr. (Scott) Silverii is going to have on his hands.”

Councilman at-large Chip Badeaux said he was in favor of voting to bring the proposition to the public.

“Recreation can create economic development,” Badeaux said. “If you have the facilities available, for example, to have baseball tournaments or soccer tournaments, it brings in hundreds and sometimes thousands of people to the community where they all spend their money.”

At $8.3 million, the reconfiguration of Andolsek Park is the costliest of the four projects the mayor proposed last week.

“We’re not talking about chicken feed,” Eschete said. “We’re talking about an actual redevelopment of a park, which I guess everybody realizes will cost a lot of money.”

Peltier Park, a baseball and tennis facility, is the second costliest project at $3.8 million. The current park, which is about 50 years old, would not be completely redone, as is the case with Andolsek, Eschete said.

The mayor said four new youth baseball fields would be built and a high school regulation field would also be introduced. The two current fields would remain in their current state.

Four new tennis courts, four covered batting cages, a 1,500-square-foot concession stand/press box and 330 new parking spots would also be introduced to the park. The walking path would be extended by about half a mile.

“We will also be large enough to accommodate kids in the upper age groups so we could actually host tournaments,” Eschete said. “This is a lot less involved than what we’re looking at Andolsek Park, but it is again a redevelopment of a park that is some 50 years old.”

The mayor proposed $1.3 million in improvements to the municipal pool facility, headlined by an eight-lane competition pool.

The facility will include a shallow-water wading area, a slide that drops into a plunge pool and an increased seating area for spectators.

The mayor said the current pool, which is about 60 years old, leaks water at a high rate and costs the city about $50,000 per year in additional water costs. “We’ve tried everything from going in and placing expansion joints, trying to detect leakages in the deep-end where the main drain is, and we continue to still have problems there.”

The mayor said he is still weighing options for what renovations the city would exact on the pool, but the rendering he unveiled last week would fit in the current footprint.

“I don’t have to tell anybody who has been there in the last few years that it is in dire need of replacement,” Eschete said. “The key to this particular issue is the fact that I think the park is grossly underutilized and I think what we need is to get people to use the facility is a catalyst.”

The catalyst would be a new 5,600-square-foot community center that would include a meeting room, assembly room, kitchen and restrooms. Playground equipment would have to be relocated, but the new center would be at the same location as the current one, Eschete said. The project would cost about $1.5 million.