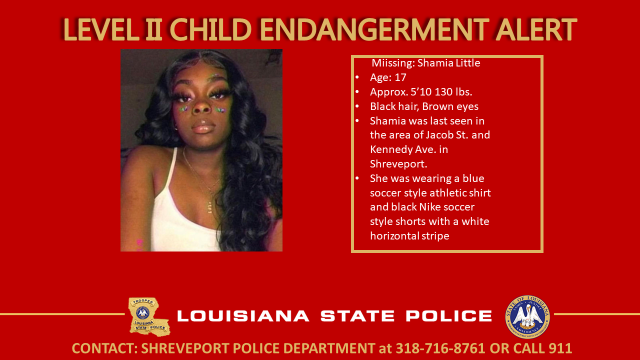 The Louisiana State Police has issued a Level II Endangered/Missing Child Advisory, on behalf
of the Shreveport Police Department (SPD), and is requesting assistance with locating Shamia Little.

She was
reported missing to SPD this morning, and she was last seen at approximately 11:00 p.m., on July 6, 2021, in
the area of Jacob Street and Kennedy Avenue, in Shreveport.

Shamia is a 17-year-old black female with black hair and brown eyes. She is approximately 5’10” tall and weighs
approximately 130 pounds. She was last seen wearing a blue soccer style athletic shirt and black Nike soccer
style shorts with a white horizontal stripe.

Anyone having any information as to the whereabouts of Shamia Little should immediately contact the Shreveport
Police Department at 318-716-8761 or local law enforcement.