Cassidy: ‘Remove the Bullseye from the Back of My Hardworking Constituents’

Car crash leads to closure of LA 308 in Lockport area 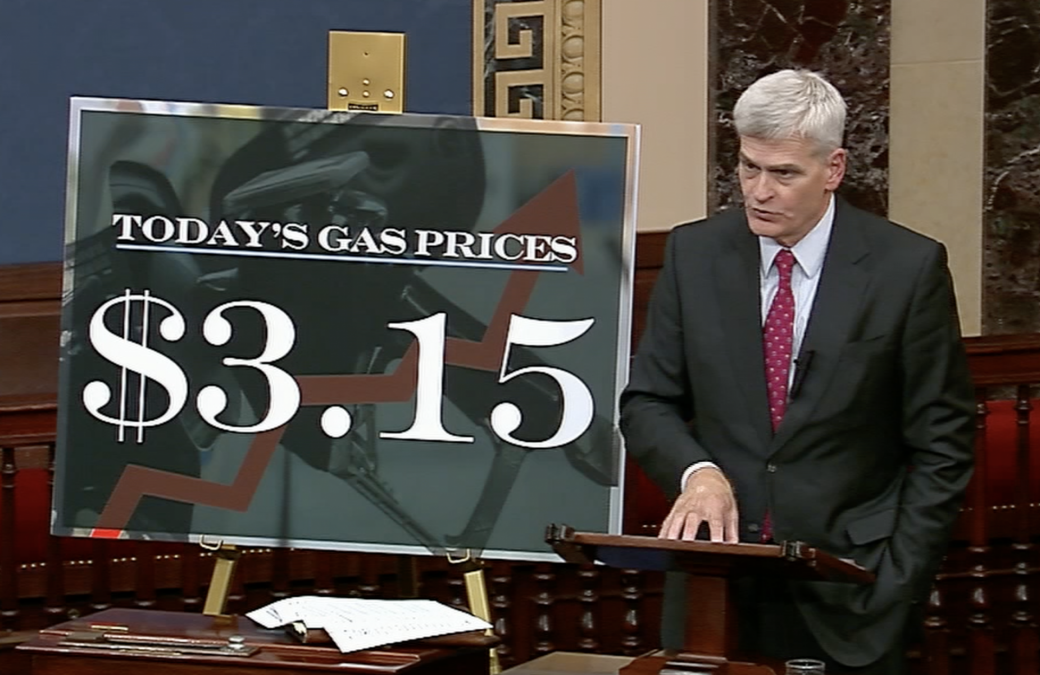 U.S. Senator Bill Cassidy, M.D. (R-LA) today delivered a speech on the Senate Floor highlighting what he feels is the hypocrisy of the Biden administration’s energy policy while average gas prices have soared beyond $3.00.

“It’s been only six months of the Biden administration, but every day, that target on the back of an oil and gas worker and on their family’s future gets bigger and bigger and bigger,” said Cassidy. “It’s almost, if you will, a quadruple whammy: weakening U.S. security, increasing greenhouse gas emissions, increasing gas prices, and killing American jobs. That’s what this administration’s policies have been doing.”

“We are pleading – not with OPEC – but with the administration to leave our jobs and the livelihoods of Louisiana workers and American workers alone. Let’s just speak about the Louisiana industry. The oil and gas industry in Louisiana is a major economic and industrial force, a force for good,” said Cassidy.

Cassidy’s speech as delivered can be found below:

We have to talk about the White House’s hypocritical and backwards energy policy that is putting a target on American workers.

The Biden administration is happy to cancel U.S. pipelines and kill the jobs pipelines create, putting the people in Louisiana and elsewhere in the nation out of business, justifying it by saying, “this is how we lower greenhouse gas emissions.”

Yet, they then green light a Russian pipeline into Germany when the emissions that come from Russian gas far exceed the emissions profile of gas that is produced in Louisiana or elsewhere in our country. By the way, it also creates Russian jobs while simultaneously killing American jobs.

Let’s look at gas prices, which are now much higher than they were. The Biden administration is working to put a pause on oil and gas production in the Gulf of Mexico, but they are pleading with OPEC to increase OPEC production, saying we need more oil shipped to the United States to lower gas prices.

Last week the president’s press secretary said that the administration is encouraging OPEC countries to reach [an] agreement to increase production while they are simultaneously stymieing US production and the U.S. jobs that go along with the production of U.S. oil and gas.

And it just begs the question, the administration is helping Russians and the Russian economy. They’re helping OPEC nations and workers in OPEC. Why don’t we think about helping American workers?

Let’s just speak about the Louisiana industry. The oil and gas industry in Louisiana is a major economic and industrial force, a force for good, and the benefits from the environmental perspective must be stated.

The U.S. is a global leader in decreasing greenhouse gas emissions, and this happened because of increased production of U.S. natural gas, and we simultaneously became a net exporter of energy, helping other nations lower their emissions profile as well.

But from we have seen in the last few months, you would not understand that. As I mentioned earlier, President Biden canceled the Keystone XL Pipeline and 11,000 jobs with it, but, again, Russian pipelines are okay.

The administration removed sanctions from Russia, clearing the way for the construction of the Nord Stream 2 Pipeline, cementing, by the way, Europe’s reliance on Russian gas.

It’s almost, if you will, a quadruple whammy: weakening US security, increasing global greenhouse gas emissions, increasing gas prices, and killing American jobs. That’s what this administration’s policies have been doing.

It begs the question: why don’t we green-light US pipelines as opposed to green-lighting Russian pipelines? Americans across the country, every time they fill up their tank, feel these punches and they are tired of it.

The average price of gallon has now been over $3 a gallon since May, clocking in at $3.15 as of today, and it’s only going up. It’s expected that gas prices will rise another 10 to 20 cents through the end of August.

Louisiana is a bit luckier because of our position as an energy powerhouse. The gas prices here at home are still averaging about $2.75, not going down any time soon.

The administration says that they are killing jobs in the U.S. because of carbon emissions, but when you produce oil and gas in the Gulf of Mexico and bring it to our shores, it has the lowest emissions profile of any oil and gas that we use in our country. You almost have to ask, what is it about the U.S. oil and gas worker that the administration doesn’t like?

In 2019, just speaking about Louisiana, oil and gas operations supported nearly 250,000 Louisiana jobs. That’s about one out of every nine jobs in my state. The oil and gas industry provided $73 billion to the state’s gross domestic product, more than a quarter, and through taxes alone accounted for $4.5 billion going directly to coastal restoration, environmental improvement projects, schools, infrastructures, roads, you name it, making life better for the citizens of my state.

One more time, let me say in conclusion. The Biden administration’s working against U.S. oil and gas production is making other countries stronger. It is making us weaker. It weakens American security. It increases global greenhouse gas emissions. It increases gas prices, and it kills jobs.

We need better policy for our country, for my state, for our workers.

Thank you, Madam President. I yield back.