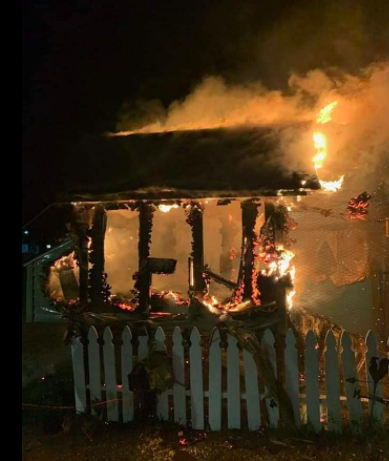 Sheriff Tim Soignet extends his thanks and appreciation to two Terrebonne Parish deputies who took quick action Friday night to rescue and protect a dozen chickens from a shed fire in Bourg as well as civilians who assisted with the effort.

Deputy Justin LeBlanc was dispatched to the fire scene on Jeff Drive Friday, Feb. 19 at about 6:47 p.m., arriving three minutes later, and was joined shortly after that by Deputy Landon Siglar.

The shed, used as a chicken coop, was fully involved when firefighters from the Bourg Volunteer Fire Department first arrived and large flames were quickly knocked down. While suppression efforts continued, the deputies, along with neighbors and the owners of the birds, were able to remove them one by one.

“The Bourg Volunteer Fire Department did a great job of putting a quick stop to that fire,” Sheriff Soignet said. “Actions of neighbors and friends of the owners to rescue the chickens show the kind of caring communities we have in Terrebonne Parish. I am very proud of the work our deputies did, going the extra mile to save them. These chickens were cherished by their owners as pets, and I am glad our contribution made for a good outcome.”