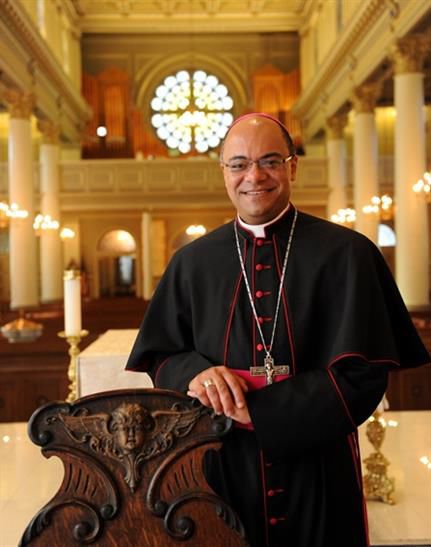 Declines in oil and gas revenue – already an albatross for the overall local economy – are now impacting another Bayou Region financial sector.

Bishop Shelton Fabre announced Friday that due to a drop in oil and gas revenue that the Diocese of Houma-Thibodaux has depended on for decades has created budget woes that were addressed by layoffs of five employees at the pastoral center where the diocese is headquartered. Five other positions were consolidated for handling by remaining employees, with adjustments made to their duties and responsibilities. Generally, the positions eliminated were secretarial in nature. Identities of employees or specific job titles were not disclosed.

“All of us are aware of the poor economy now affecting our communities in the Diocese of Houma-Thibodaux and other areas of the State of Louisiana,” the bishop said. “This struggling economy doesn’t only affect ‘geographic areas,’ but even more importantly it directly affects people’s lives. Our prayers go out to anyone affected by these challenging financial times for we are all impacted by the economy in one way or another.”

The layoffs are part of the 2016-2017 operating budget, which falls in place July 1, and will rein in costs by $550,000. The figure also represents expenses that have been cut.

The Diocese of Houma-Thibodaux serves over 126,000 Catholics at 39 church parishes, two missions, 13 Catholic schools, and Catholic Charities with a total employment throughout the Diocese of 1,100.

The personnel cut were all lay employees; no priests or nuns were affected.

A diocesan employee described the mood at the offices on La. 311 as somber, but said that people affected were understanding.

A gift in the mid-1980s to the diocese from a local family of lands bearing mineral revenues has played an important role in the ability of diocesan officials to manage annual costs. However, the oil and gas revenues plummeted over the past two years or more by 60 percent, explained the Rev. Mark Toups, diocesan chancellor.

In June 2015, the diocese cut its 2015-2016 budget by $850,000 and as royalty revenue continues to suffer, the diocese has had to make additional cuts to responsibly manage its operating budget. With this latest budget adjustment, the diocese is working toward a budgeting process that eliminates royalty revenue as an annual budget income stream so that it can more prudently project annual income and expenses, Toups said, adding that there were no expectations that services received by parishioners at the various churches or in relation to diocesan projects will be cut back or affected.

“Many families are forced to make tough decisions during times such as these,” Bishop Fabre said. “Likewise, our church family and the Pastoral Center of the Diocese of Houma-Thibodaux must make similar decisions if we are going to remain good stewards of the financial resources entrusted to us. Diocesan offices must operate realistically within a balanced budget. I deeply regret that in the face of these financial realities we have had to make very difficult and painful decisions regarding people’s employment with the diocese. However, prudence and good financial stewardship require that we live within our means.”