HPD reaches out to area’s needy with food boxes

Use your car to help reduce your environmental impact 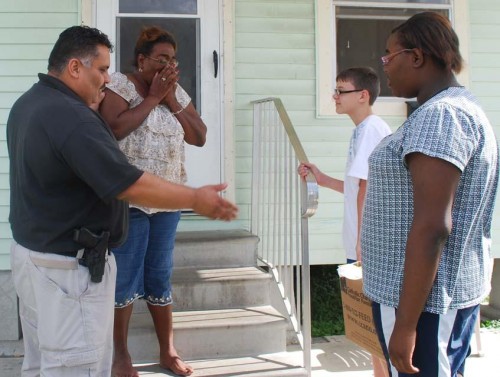 Ruby Diggs saw the Houma Police Department vehicle stop in front of her Canal Street home and began to think the worst.

“What now?” she asked as Lt. Bobbie O’Bryan stepped out of his truck. Straight-faced, he strode toward the light green house.

As he approached the stoop, O’Bryan delivered the news and Diggs’ despair-stricken face lit up with excitement. After all, she just received word that she would have turkey for Thanksgiving.

“I didn’t think I was going to have a dinner,” Diggs proclaimed before hugging O’Bryan and the two children who delivered the basket while completing community service hours with HPD.

While they said they enjoy helping anyone they can, last holiday season, GCTFS and O’Bryan were able to feed 60 families.

“There is a big difference in what we are able to do this year because of the economy,” O’Bryan said at HPD headquarters, where the baskets are put together. “Look at the room. Last year it would have been filled. We didn’t get as much food as we thought.”

This year, the room had four tables topped with canned goods and other non-perishable food items.

O’Bryan said they wanted to help needy families in any way possible, even though it meant a portion of the assisted families only received a turkey due to a lack of secondary foods.

“I think this year was a great success,” O’Bryan said. “Even if we had targeted one family, it would have been a great success. At least we were able to do it and people that have donated food to help that effort, we greatly appreciate them.”

Linda Jones-Triggs of GCTFS spent last Tuesday morning searching for turkeys. She also targeted two families in both Assumption and Lafourche parishes who were in need of a food basket.

“I just do it to help,” Jones-Triggs said.

The social service agency identifies qualifying families for the food baskets, which include a frozen turkey, two cans of vegetables and rice, and then it collaborates with O’Bryan and HPD, who also works to identify families in need, to deliver the donated goods.

The HPD lieutenant said some families are hard to identify.

“Some families are too proud to ask for food,” O’Bryan said. “You’ll drive past someone and wave to be friendly, but you get a gut feeling that they may need some help, and not everybody goes to the Food Bank.

“We wanted to target a lot of families that were really in need, and Linda identified other families in other parishes that were also in that kind of need because they are either too far away or programs are not outreaching to them. Next year we’ll try to do it again.”