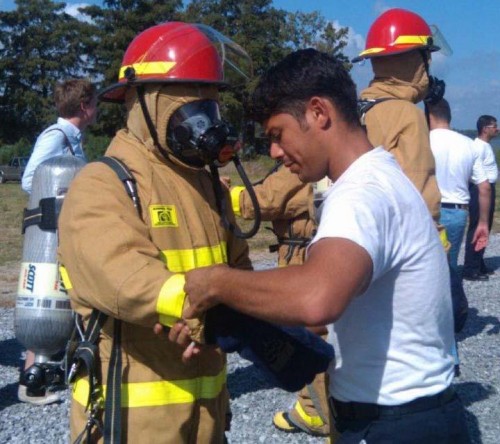 Don’t look now, but the Iraqi Navy has set up operations in Morgan City.

It’s business as usual n in a quiet way n as Swiftships continues to build 15 new 35-meter patrol boats and train three more classes of Iraqi sailors. It’s all part of a contractual agreement between the Morgan City operation and the Iraqi government.

The construction work and training are happening at Swiftships’ Levee Road site along the Atchafalaya River.

The bid to build 35-meter boats is part of an effort to beef up Iraq’s Navy, which will better enable it to defend ports and offshore oil platforms, a particular weakness in the Middle East since the 2003 invasion of Iraq, according to David Freeman of Swiftships.

The first Swiftship’s boat is already in Iraq and was unveiled to the public at a special Navy Day celebration earlier this year. As more boats are completed, Freeman said the crafts will be loaded onto heavy-lift ships and transported to Iraq.

But, for now, a new class of trainees and more shipbuilding continue.

“Why are we doing this? Well, the Iraqi Navy is increasingly assuming responsibility for the protection of its territorial waters and its oil export infrastructure,” Ferrau explained.

“The Iraqi Navy is on track to assume full responsibility for the protection of its territorial waters and their critical oil infrastructure by the end of 2011, so we’re doing our part to continue what the government set out to do with Operation New Dawn, to advise, train and assist the Iraqi Security Forces to build Iraqi civil capacity,” she added.

During their stay in Morgan City, the Navy sailors n roughly 45 n live on a barge docked inside the Swiftships yard. The barge is equipped with a full kitchen and chef, a lounge area and sleeping quarters.

The sailors’ day includes a variety of training classes, including simulated situations with warfare and weather scenarios.

The sailors are permitted to leave Swiftships’ grounds, and many have been spotted shopping at the local Rouses or playing sports at Morgan City’s Lake Palourde Campgrounds.

Oliver said some of the men have frequented Southland Mall in Houma and traveled to New Orleans for prayer. “Their day of worship is Friday, unlike ours, which is generally on Sunday,” he said.

To date, two Navy classes have successfully graduated from Swiftships’ 90-day program; the first in July and the second in October.

According to Chris Meyers, the lead instructor with VSD, a company working in conjunction with Swiftships on the training program, most of the classrooms are railroad cars that have been renovated and wired to offer hands-on-training.

Training situations include “harsh weather and sea-sick scenarios,” he said. “Others allow sailors to be trained on how to use AK47s, a cannon and even 50-caliber machine guns.”

Meyer said the classrooms will be shipped to Iraq in a railroad container when all the courses are completed. “This will allow for more training,” he said. “It really puts it all together for [the sailors].”

The computerized simulators focus on the ship’s operations, damage control and general boat operations, he explained.

Members of Iraq’s Navy suit up for training exercises during Swiftships’ 90-day training program. The Morgan City-based company is currently training its third class of sailors as part of a U.S./Iraq agreement. HOWARD J. CASTAY JR.