Leave the driving to Greyhound in June 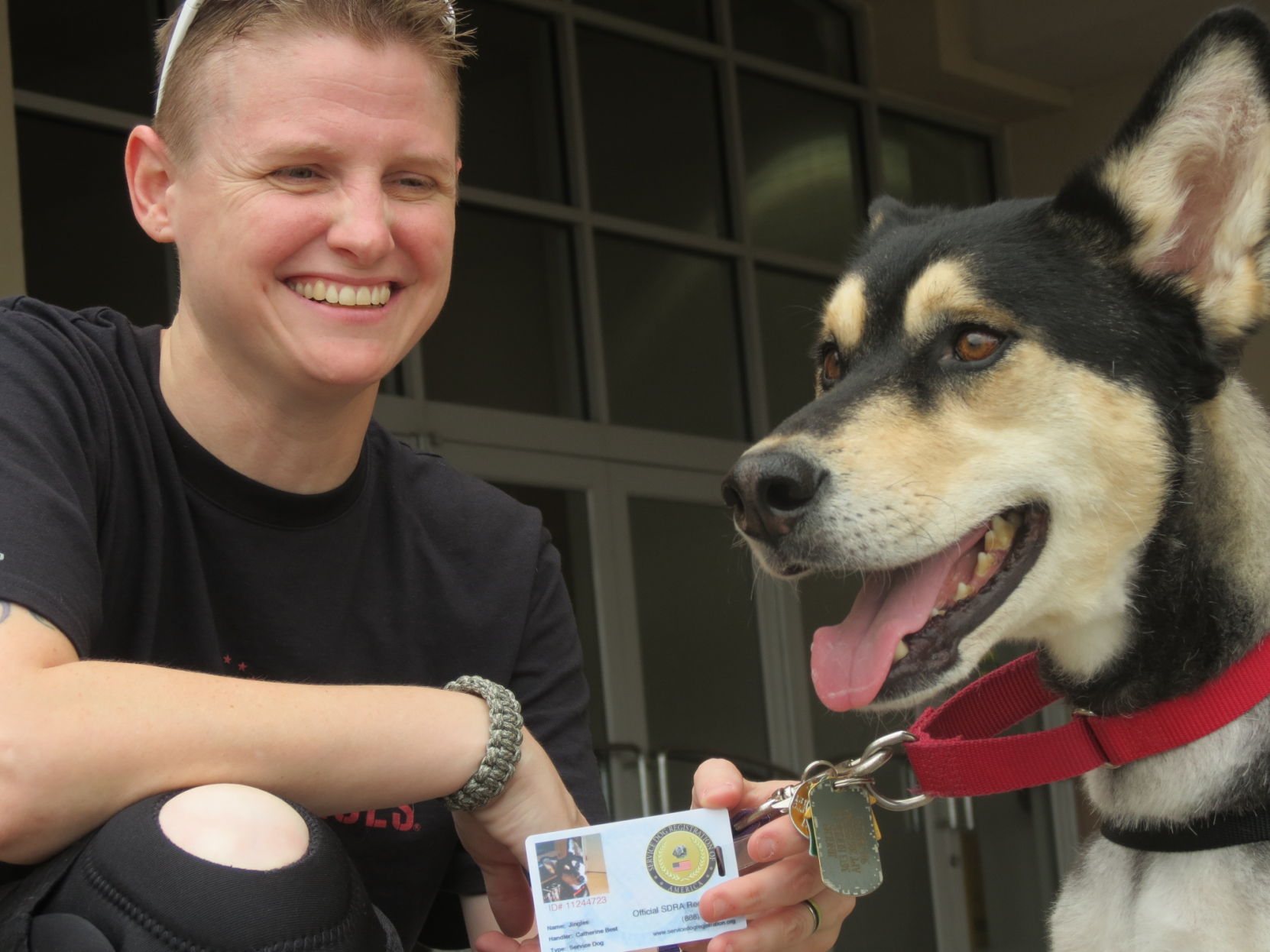 Jingles is a head-turner.

The gray and white husky mix with the soulful sepia eyes is especially noticeable in his bright red vest, the one that says “Service Dog.”

His special mission is not readily apparent. But if it was then even more people might be lining up to shake his hand, as occurred with some pre-teens last week during a routine shopping trip.

“He is a life-saver,” says his handler, Catherine Best, whose post-traumatic stress syndrome symptoms are these days largely kept in check by Jingles. He is specially trained to recognize when Catherine teeters close to trouble, and lets her know about it.

Because he performs special tasks – which go beyond mere companionship or having a calming effect simply by being present – Jingles’ ability to go anywhere Catherine does is protected by federal law.

Nonetheless, Catherine finds herself challenged, sometimes politely and sometimes less so, with questions that in some instances go beyond what the law allows.

“It’s frustrating,” said Catherine, who does not wish to discuss her medical history with strangers. “The discomfort level it creates is to a point where I am either on the verge of turning around and walking out or I am pretty much staying on high alert.”

That “high alert” status – and the physiological responses that it triggers – is precisely what Jingles is watching for. Catherine acknowledges the irony she lives with, that the questioning of her need for the dog creates the need for him to do his job.

Catherine says that at a Wal-Mart store a few weeks ago an employer saw her walk in with Jingles and loudly called out that no pets are allowed. Catherine said she explained to the woman that Jingles is a service dog, displayed her special identification and his, then went about her shopping.

Catherine did not make a complaint but if she did, store management might have had something to tell their employee.

“Wal-Mart is committed to making reasonable modifications to its policies, practices, and procedures to permit the use of service animals by its customers with disabilities,” reads an official statement from the company. “Service animals play an important role in ensuring the independence of people with disabilities, and it is our policy to welcome into our stores any animal that is individually trained to assist a person with a disability.”

The ADA limits what questions may be asked by a storekeeper or restaurant manager, as to the dog’s purpose.

Appropriate and legal questions are limited to “is the service animal required because of a disability” and “what work or task has the dog been trained to perform.”

A U.S. Department of Justice memorandum states that effective 2011 “service animals are defined as dogs that are individually trained to do work or perform tasks for people with disabilities.”

“Examples of such work or tasks include guiding people who are blind, alerting people who are deaf, pulling a wheelchair, alerting and protecting a person who is having a seizure, reminding a person with mental illness to take prescribed medications, calming a person with Post Traumatic Stress Disorder during an anxiety attack, or performing other duties,” the memo reads. “Service animals are working animals, not pets. The work or task a dog has been trained to provide must be directly related to the person’s disability. Dogs whose sole function is to provide comfort or emotional support do not qualify as service animals under the ADA.”

The law does not require special identification, although some handlers – Catherine included – carry cards issued by various organizations and dogs are often clad in vests that state “service animal.”

“Staff cannot ask about the person’s disability, require medical documentation, require a special identification card or training documentation for the dog, or ask that the dog demonstrate its ability to perform the work or task,” an ADA factsheet from the Department of Justice states.

Catherine also faces questions from fellow shoppers or just people on the street; some ask her if she is blind, and when learning she is not asking for details on why she needs a dog that comes inside the mall or a government office with her.

The law does make a distinction between service dogs and companion animals or “assistance dogs,” which fall into a different category and can live with handlers in places that do not ordinarily allow pets.

Bob Taylor, whose California-based organization, called Dog Wish, trains psychiatric service dogs and their handlers. He notes that for people living with PTSD an anxiety attack can be devastating.

“They are bombarded and what follows can be a mental breakdown where they retreat to a victim-like mentality,” Taylor explained. “They start reliving all these things in their mind.”

The problem is bad for veterans although Taylor, other experts and doctors note that PTSD is not the exclusive purview of the military.

Preventing an attack, Catherine said, is precisely what Jingles does best. He understands what is happening with her chemistry before she does.

“He responds to me,” she said. “What he does is calm me down. If we are walking and something is happening he will push up against me, or push against my leg and nudge my hand and let me know he is there. He is saying ‘focus on me.’”

Catherine said her PTSD was first diagnosed when she was in the military, but that it was rooted in events long before.

“I wanted to fight for my country is what it pretty much came down to,” said Catherine.

Stationed at Fort Jackson, S.C., she underwent training successfully but other problems emerged. Catherine was repeatedly assaulted by a fellow soldier whom she knew. The incidents, she said, caused bad feelings to percolate within her to a point of unmanageability and she sought help.

The other soldier was booted out of the military but the scars – both the old ones and those inflicted by the soldier – remained.

Catherine was unable to join her unit in Iraq and remained at Fort Hood where psychiatric assistance continued. It was a physical injury, however, suffered during training, related to a rifle kickback, that paired with PTSD, resulted in an honorable medical discharge that ended Catherine’s military career far sooner than she would have liked, in 2008.

Following her time in the military Catherine relocated first to Houston and then to Houma, where she has remained since.

Jingles was adopted at the Terrebonne Parish animal shelter in 2014 and shortly after that he and Catherine underwent training.

At first the organization Train a Dog Save a Warrior provided help; after that both Catherine and Jingles worked with Blue Collar Training Services, now in New Mexico.

Adjusting to life with Jingles has been a joy, Catherine said. Adjusting to the comments, the questioning and the challenge to Jingles’ presence is another matter.

‘I am hoping people will recognize that he is a service dog, that he works, that his work doesn’t stop, and to understand that service dogs are more than just seeing eye dogs,” she says. “There are many things people suffer from that dogs are able to recognize and help.”

Catherine Best and her dog Jingles, who helps her to cope with post-traumatic stress disorder, after a shopping trip to the Southland Mall last week. Jingles is trained to detect when Catherine is having a PTSD episode and will rub against her or nudge.