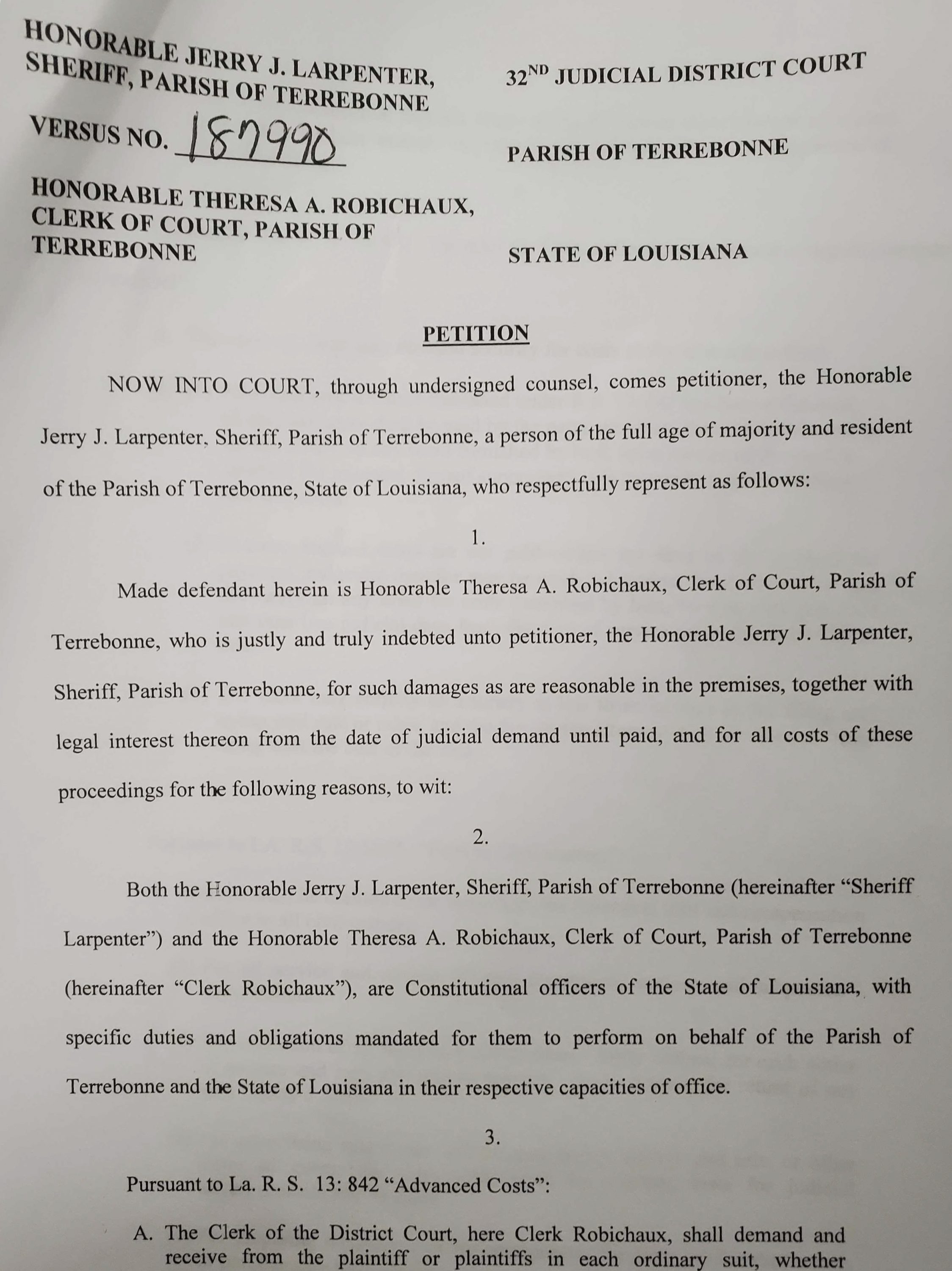 A lawsuit was filed Monday, January 24, by the Sheriff of Terrebonne Parish against the Terrebonne Clerk of Court alleging money due for services rendered. The clerk says, her hands are tied and the Sheriff knows it.

The lawsuit was filed by Sheriff Jerry Larpenter against Theresa Robichaux, Clerk of Court, alleging the clerk’s office owes $746,186.92 in services rendered since 1984. The clerk says she has followed procedure for collecting these funds, some of which are older than five years, and cannot be collected by her office.

“If I don’t get anything, I can’t pay anything,” Said Robichaux. “I’m limited by law in ways I can collect. I can’t pull money out of the general fund to pay someone to collect for me.”

According to the lawsuit, the Sheriff’s office is entitled money for each service rendered. This includes: returns of legal documents, notices, and subpoenas; execution of writs and court orders; each notice of seizure and sale; advertising sales of seizures; retaining property under seizures, etc.

Most of these are owed $30 each. According to the lawsuit, a 2019 review and audit of outstanding fees revealed the outstanding balance of $746,186.92 owed by the Clerk and her predecessor Robert Boudreaux. Sheriff Larpenter then argues in the lawsuit that the funds in question belong to the public and would have been used by the Sheriff’s Office to better serve the people.

“The failure to recover these costs go far beyond just monies owed the Sheriff’s Office,” says the lawsuit. “The funds in question belong to the public and such funds could have and would have been used by the Sheriff’s Office to better serve and protect the citizens of Terrebonne Parish.”

Robichaux said, Larpenter knows the money cannot be paid. She said some of the services are exempt from the Clerk charging fees, these include State, Parish, domestic abuse, and this includes the Sheriff’s own office.

“Any government agency is exempt from costs,” she said. “We have to be very careful about what we spend and how much… we exist off the fees we collect.”

According to Robichaux, The Clerk of Court’s office runs almost exclusively on the fees it charges (exceptions include office supplies, bookbinding, and record maintenance). And while the figure of $746,186.92 appears large, Robichaux says her office has paid over $7 million since 1984.

When an individual cannot afford the fees, a judge may deem that person as a “pauper.” When this occurs, that person is waived the up front charges.

After that person’s financial situation changes, he or she still owes the fees. In such cases, Robichaux said, her department sends them a letter asking for payment due. Often the individuals pay, even if it requires a payment plan; however, a small portion, of these evade. At that point, Robichaux said she has to decide if what will be collected is worth the cost of perusal.

She explained that these often involve child support cases. According to the law, said Robichaux, she cannot pursue fees older than five years.

This may change, she said, a recent meeting she had with the Office of Debt Recovery, a state entity, may allow the recovery of fees older than five years.