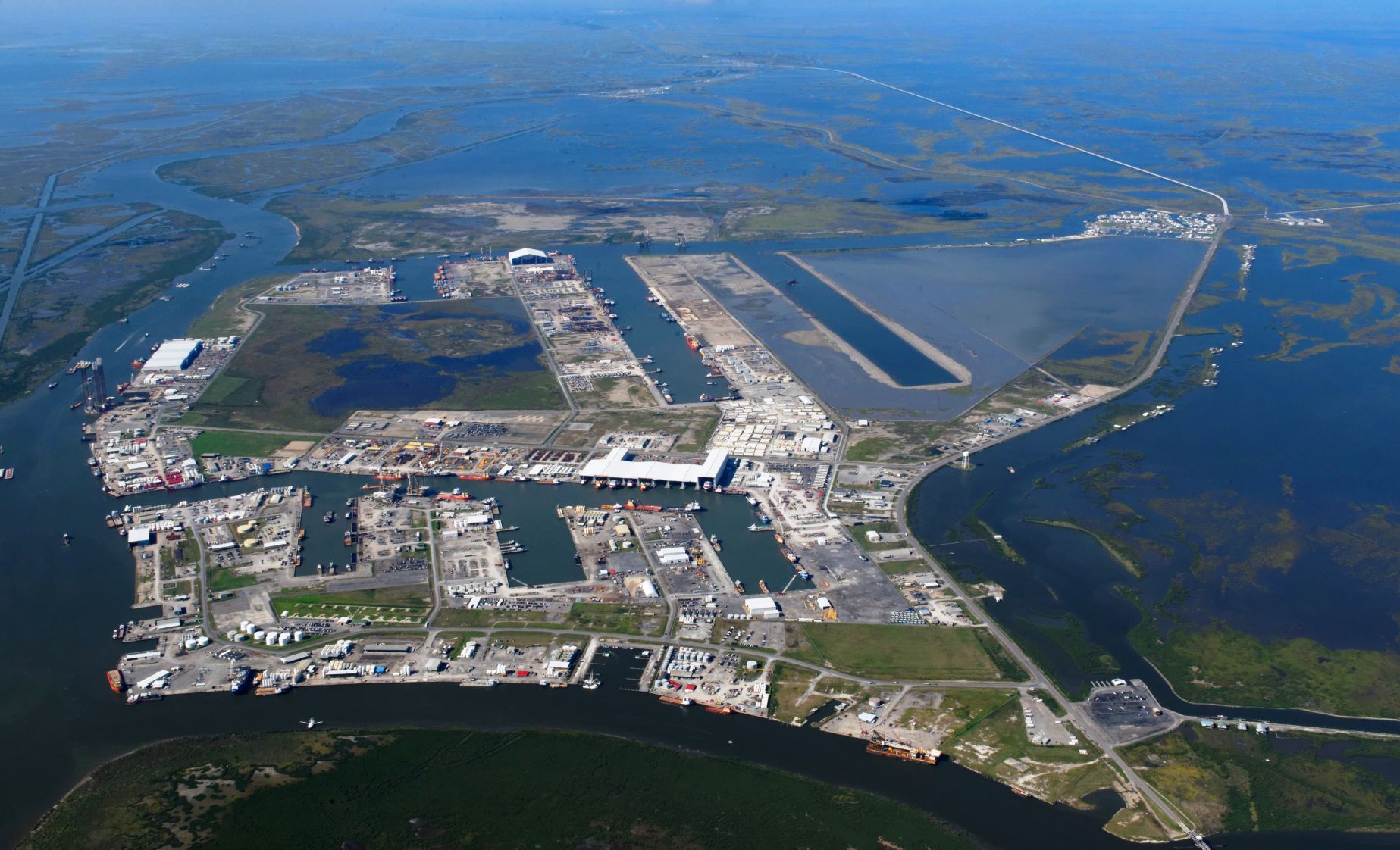 When the price of oil is high, business at Port Fourchon is non-stop as tenants move at a lightning pace to keep up with all of the demands presented by the industry.

But that doesn’t mean when the price of oil is low, work comes to a complete halt.

In fact, the exact opposite is true.

When in a downturn, Port officials continue to work frantically so they can be bigger and better than ever before when the next upswing takes place.

Officials with the port said tenants are downsizing, but hanging on, as the current economic dip ripples through every segment of the area economy.

But Port Fourchon Executive Director Chett Chiasson said that while no one is yet sure when things will turn around, everyone is confident that the industry will, indeed, pick up in the near future.

And when it does, Chiasson proclaims that Fourchon will be ready, thanks to several projects that are taking place in anticipation of the brighter days that are to come.

“Right now, our focus is on getting ahead of the game,” Chiasson said. “It’s been busy over the last several years here, so honestly, we often times were a little behind and were trying to catch up with the demand. Now, we’re going to outpace the demand. We’re going to have things ready for when the industry needs them. That’s going to allow us to stay ahead of the game. It’s down now, but it won’t be down forever. We will be ready when it all gets rolling again – that’s our focus.”

To accomplish Chiasson’s goal, work has been done throughout the summer to make the port capable of handling high volumes of demand.

Chiasson said in August, work was completed on the construction of a bulkhead in the port’s Slip C.

“That was just completed – literally just a couple weeks ago,” Chiasson said.

With that done, the executive director said workers are moving their energy toward another bulkhead in Slip C – this one with an estimated completion date at the beginning of 2017.

From there, Chiasson said a lot of the port’s focus right now are on little things that few people think about – projects that will make life a lot easier on everyone involved once the price of oil rises again and work picks back up.

“We’re working on having an access road that we’re building the subbase for,” Chiasson said. “That will help alleviate traffic when we get real busy again. We just completed some maintenance dredging, and we’re working on the design of another 950 feet of bulkhead in Slip C and looking at the design of more bulkhead construction in Slip C. We need to complete all of the bulkhead construction in Slip C so that it can be ready for when that pickup in business comes our way.”

But while waiting, Chiasson conceded that times are tough and businesses are hanging out as best they can.

Once the downturn started, the Port Commission voted to reduce rent for tenants – a proposal that expired, but was extended earlier this year in an effort to keep folks afloat.

Chiasson has gone on record several times to say the rent reduction was something he supports – an olive branch from the port to tenants to show the port has the struggling businesses’ backs in their time of need.

Louisiana Oil and Gas Association President Don Briggs agrees and said he thinks the reduction was spot-on and exactly what was needed.

“The industry is slower than folks have become accustomed to and companies were struggling to pay,” Briggs said. “That was the best thing for them to do – lowering the rent.”

Chiasson said the port has some open leases, but that work is still going on.

He said the companies that have terminated their leases are all still in the port, but have just chosen to downsize in an effort to stay afloat.

“We have some properties available right now, which is typically not the case,” Chiasson said. “We’re typically 100 percent, but right now, we’re not. Right now, we have a few areas available. We have one waterfront bulkhead that we just finished that’s not leased. The rest of the sites available are non-waterfront facilities. The occupancy is still very high. It’s in the upper 90 percent range. We’re still doing OK. Our customers are still there. They’re staying the course.”

But make no mistake about it – things could be better and everyone knows it.

Chiasson said he feels for everyone that’s lost their job during the current dip, adding that those types of things are the toughest things to see in his position.

But he said repeatedly that the industry will be back, and he points to history as the reason why.

This is not the first time the oil and gas industry has been knocked to the canvas by an unstable market.

But over time, it’s always found its way back, and Chiasson said it will do the same this time, as well.

And everyone in the area just hopes it’s sooner, rather than later.

“We believe it’s going to get better at some point. Everything we’re told says it’s going to get better at some point,” Chiasson added. “If I knew when that was exactly, I would be a billionaire. I don’t know and no one does, and that’s the helpless feeling we all have, because people aren’t worried about tomorrow when their job is on the line today. My gut tells me we will be dealing with this until the middle of 2017. That’s based on things I hear and read. By then, I think things will pick back up.

“And in the meantime, while waiting, our focus is on making sure our tenants are OK and making sure that we’re ready for the next time that things are full-steam ahead.” •