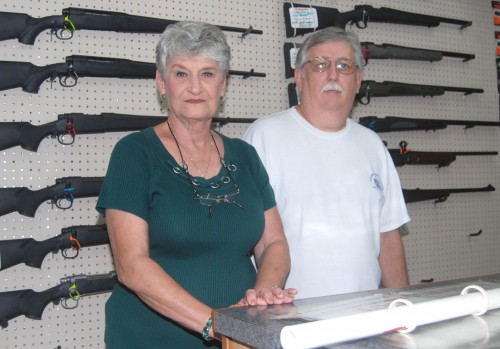 You never know where sweeping the floor may take you. Just ask Calvin Prevost, owner of Houma Auto Parts.

“I started working here when I was 19, when were at the old location on Barrow Street, and I cleaned up around the place,” Prevost said.

L.M. Cancienne first opened Houma Auto Parts in 1933, and as his family died, left the business or moved away, Prevost came to own the buiness in the 1980s, after being employed there since the 1960s.

“We were in the auto parts business until 1990. We couldn’t compete with the big box stores, and we wanted to go with something we could survive with, guns,” Prevost said. “We kept the name, which sometimes confuses people.At one time though, we were in both businesses.”

In addition to firearms, the store also sells ammuntion, scopes, cleanining accessories, antiques and collectibles such as old duck decoys and books. The shop also sells knives from Columbia River Knife and Tool, Benchmade, Boker and Smith and Wesson.

“We have a very good business dealing guns,” he said. “Guns can’t be ordered directly, so we have an equal advantage with other gun-selling stores.”

The shop’s top sellers are handguns, followed by rifles and shot guns.

“The paperwork that is involved in buying a gun, people can’t bypass that, and that keeps us in business,” Prevost said.

Even though Prevost, his wife Juanita, and their daughter, Lisa Bonvillian, all work at the store, Prevost doesn’t think that his family will continue to run the store when he retires.

“When I retire, I don’t know who will take over the business,” Prevost.

Just a few weeks ago, the shop lost one of its employees when he died from illness.

“Patrick Trahan worked here for about eight years,” Juanita said. “He had been gone about a year since he had taken ill, and he had planned to come back.”

Though the business may not stay in the family name, it has certainly been a part of the Prevost’s lives for over 40 years.

“Calvin and I met at a dance hall in 1958, and I started working here when our girls were grown, about 20 years ago,” Juanita said. “I learned the trade when I started here, and even though I’m not a gun enthusiast, I own my own guns. I think everyone should for protection.”

Protection is what brings most customers into the store, and Prevost recalled a spike in gun sales before serial killer Ronald Dominique was brought to justice.

“We sold 17 guns in one day when that was going on,” Mr. Prevost said. “Gun business also picks up during the winter, when hunting seasons are opening and customers are getting Christmas bonuses. We sometimes sell 25 in a day.”

Hopefully Prevost will find someone to pass his broom on to, and the buisness of selling protection will continue in Houma for years to come.