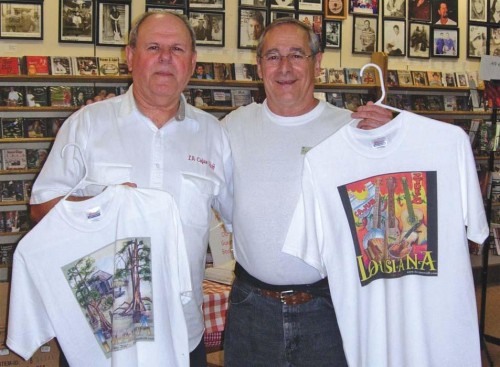 While some people are still mourning the losses suffered from Hurricane Katrina on today’s two-year anniversary of the storm, Dale Guidry and Dan Junot are telling the folks of south Louisiana to plow ahead.

Guidry, who owns LA Cajun Stuff in the Southland Mall, and Thibodaux artist Junot have teamed up to offer souvenir T-shirts promoting positive images of Louisiana.

The shirts sport a Louisiana landscape, and feature the word “Louisiana” on the front and back. They are available at LA Cajun Stuff in the Southland Mall, and on the Internet at LaCjunStuff.com.

“Katrina was Aug. 29, 2005, that’s two years ago,” Junot said. “While we sympathize with those whose losses may never be recovered, we just feel that it’s time to do like the old Cajuns who settled south Louisiana-dig in, work hard, rebuild, and promote the positive things which our state still has to offer.”

Among the several designs painted by Junot for the shirts are a platter of boiled crawfish with potatoes, lemons, and garlic; an offshore oilrig at sunrise (subtitled Cajun Gold); an egret riding on the back of an alligator; musical instruments used for playing zydeco, and a Cajun swamp shack.

Junot singled out the zydeco T-shirt.

“When bad news like Katrina comes along,” he said, “Cajun musicians just play a little louder, a little faster and stomp a little harder to scare the blues away.”

“That’s the spirit I tried to capture in the shirt design,” he said. “That’s why I used a lot of loud, bold, exciting colors, and a few Tabasco peppers for spice.”

Guidry said he does not have a favorite T-shirt design. He is just happy being able to sell them.

“For years, I owned LA Cajun Stuff and had visitors, tourists, and locals come in wanting a ‘Louisiana’ souvenir shirt,” he said. “Until now, I did not have a single one to offer them.”

“When I told my friend Dan about that, he said, ‘Well, my friend, we’re going to fix that,'” Guidry said. “He went home, got his paintbrushes out, designed the shirts, and here they are.”

According to Guidry, one customer bought five of the T-shirts before he could unpack them. She wanted to send the shirts to her homesick children living in other parts of the U.S.

Junot said he wants Louisiana to keep up its chin.

“We still have zydeco music, great hunting and fishing, boiled crawfish, and our oilfield and support industries are thriving,” he said.

“No matter how many hurricanes we have, the alligators always seem to come back,” he joked.