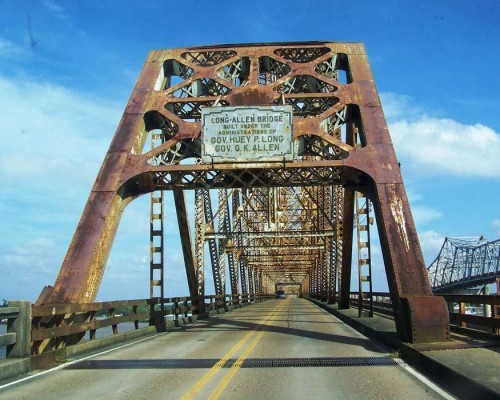 Long-Allen Bridge to get upgrade

The 76-year-old historic bridge connecting Morgan City and Berwick will soon get an upgrade, according to state Rep. Sam Jones of Franklin.

“Locals want the bridge, and we need it,” Jones told the St. Mary Parish Council last Tuesday. “(We need it) not only on a daily basis, but for emergency evacuations during hurricanes.

Prior to the Jan. 15 meeting, Fontenot put the council on notice via a letter that the state intended to eventually remove or replace the span, which carries vehicles over the Atchafalaya River.

“At some time in the future, we will have to evaluate this structure and determine a course of action to either remove or replace this bridge,” Fontenot wrote. “A decision at this time will be based on our system needs and the budget available for maintaining our bridges and roads across the state.”

The Long-Allen Bridge is one of three bridges that provide transportation across the Atchafalaya River. The truss bridge opened in December 1933, and was built by the Mt. Vernon Bridge Company.

The E.J. “Lionel” Grizaffi Bridge, a four-structure along U.S. Highway 90, opened in the 1970s. Designed to accommodate vehicles 73 feet high, the Grizaffi Bridge was expected to replace the Long-Allen Bridge, which maxes out at 50 feet.

A third bridge – the Berwick Bay Bridge – also carries a 73-foot height limit; however, it is limited to railway traffic only.

When the Long-Allen Bridge’s fate was called into question in November 2009, the St. Mary Parish Council, Patterson City Council, Berwick Town Council and Morgan City Council approved resolutions aimed at thwarting the bridge’s closure. The measures were sent to Anker.

“I was really disgusted when I heard about [the bridge closing],” councilman Steve Bierhorst said. “This bridge is a necessity to the parish and to persons across south Louisiana.

“Man, if we had not had this bridge when evacuations were ordered for Hurricane Katrina… Well, I hate to even think of the bigger traffic mess we would have had through this parish,” he added.

Because of the lane structure on the Long-Allen Bridge, traffic can easily be rerouted in the event of an emergency, Bierhorst said. The newer Grizaffi Bridge does not offer that same latitude, he explained.