NOIA President Speaks About the Importance of the Oil & Gas Industry 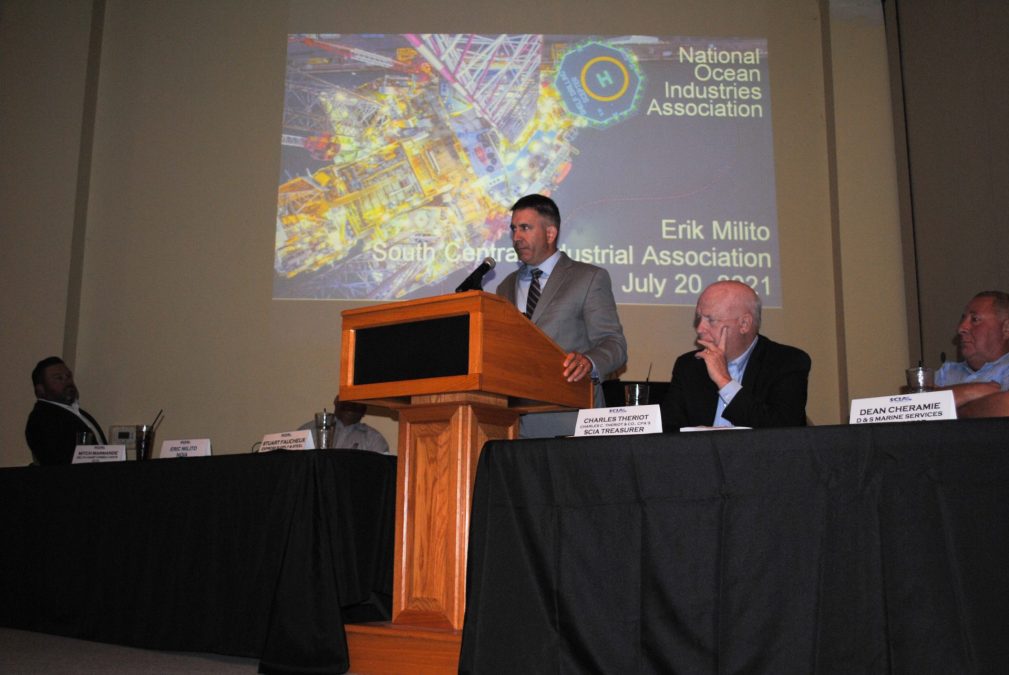 NOIA serves the offshore oil, gas, and wind industries and provides tremendous value by uniting and advancing the business and professional interests of its members and the industry. The association represents and advances a dynamic and growing offshore energy industry, provides solutions that support communities, and protects workers, the public, and the environment.

Milito described the urgency of energy efforts due to federal administration change. During the debates between Joseph Biden and Bernie Sanders on a CNN broadcast, Milito said the two were debating on the oil and gas industry. Biden said he would try to end the industry due to environmental issues sent shockwaves to the industry where they knew they would have substantial work to do. “At that point in time, we knew we would either have to prepare for a second term with the Trump Administration, which had been much more favorable to our industry…but it was then leaning toward the Biden administration coming in.” NOIA then started building the case for the energy industry in anticipation of the inauguration of a new administration. In May of 2020, a study was conducted by the firm Energy and Industrial Advisory Partners to show leasing and drilling cannot stop “because there’s too much at stake in the U.S.”

The Gulf of Mexico Oil & Gas Industry: An Economic and Jobs Machine

The Gulf of Mexico is the backbone of the oil and gas industry and has produced more than 1 million barrels of oil a day since 1997. The Gulf supports more than 345,000 jobs and brings in $5 billion into the Federal Government in revenues. Milito said NOIA knew that leasing is an important aspect of the industry in the Gulf, so they wanted to show how banning leasing would destroy jobs not only on the Gulf Coast but the country as a whole. The reach of the Gulf of Mexico oil and gas industry reverberates throughout the entire country. There are companies in every state that are vendors to the U.S. Gulf of Mexico. The bulk of the jobs are in the Gulf Coast, but Milito said there will be a huge impact nationwide if the development in the Gulf is stopped. The 2020 study compared the difference in production if leasing and permitting were to stop. The study showed that with no new leasing or permitting, jobs would decrease tremendously along with production, annual spending, government revenues, and annual gross domestic product over a 20 year period. 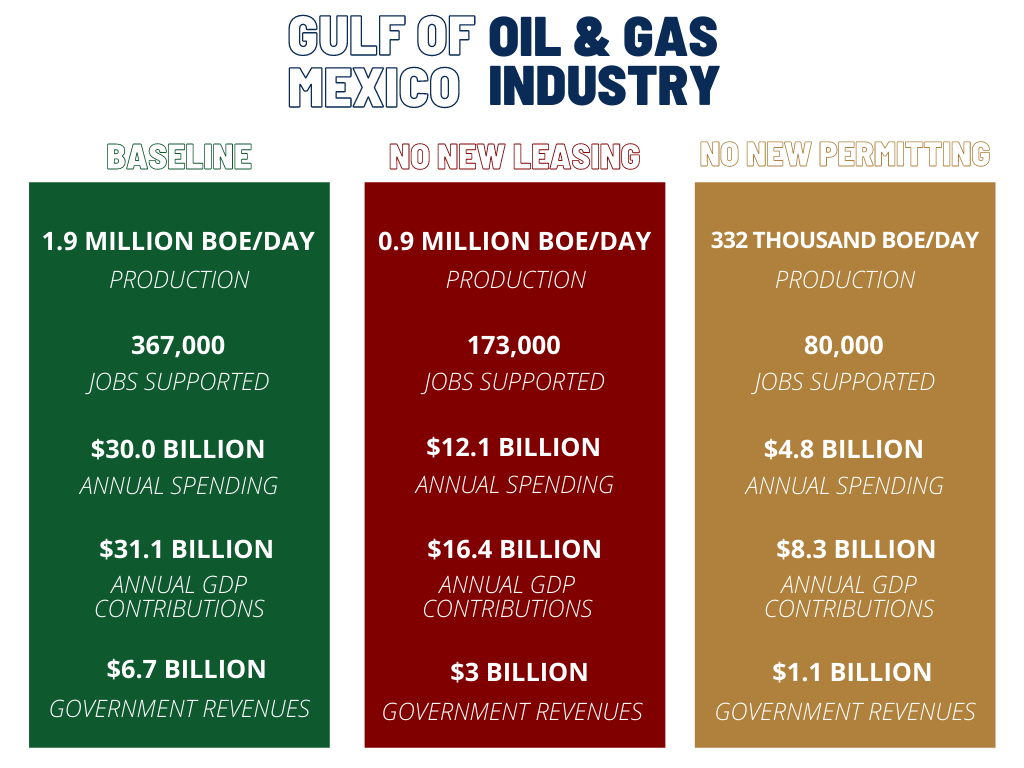 Climate Change: What does that mean for energy?

Studies show that emissions from oil production are lower than people may realize. Wood Mackenzie, an Energy Research and Consultancy firm, benchmarked emissions from different types of oil productions. The study shows deep water and continental shelf operations have the lowest carbon intensity rate. This led to NOIA to make the case that the U.S. needs to rely on oil and natural gas for decades to come, and Milito said the best place to get it is in the Gulf because “they have the jobs, investment, government revenues, and the Gulf has the lowest carbon barrels.” He said if it is stopped, it will be substituted with production with a higher carbon barrel and increase greenhouse emissions. According to NOIA, the Gulf of Mexico has a carbon intensity that is about one-half of that of other onshore areas. Deepwater, which accounts for 92% of total Gulf of Mexico production, is the lowest source of Greenhouse emissions of all oil-producing regions.

During the Obama administration, the Bureau of Ocean Energy Management (MOEM) specifically examined the impacts of the current Outer Continental Shelf (OCS) Leasing Program on climate change and emissions. They determined that the outsourcing of Gulf of Mexico production to other countries would increase greenhouse gas emissions due to transportation-related emissions. It was found that the U.S. Gulf of Mexico accounts for 17 percent of U.S. oil production, yet methane emissions from offshore oil and gas operations accounted for only 2.95 percent of nationwide energy production emissions.

One of the Biden administration’s priorities is to decrease the effects of climate change. The day the Biden administration entered the Whitehouse, Secretarial Order 3395 was put into place. Secretarial Order 3395, issued by Acting Secretary of the Interior Scott de la Vega, broadly suspended delegated authority to field personnel to “issue any onshore or offshore fossil fuel authorization, including but not limited to a lease, amendment to a lease, affirmative extension of a lease, contract, or other agreement, or permit to drill.” The order also included a suspension of the authorization to issue rights of way and other surface use authorizations.

Shortly after, Executive Order 14008 of January 27, 2021, titled “Tackling the Climate Change Crisis at Home and Abroad” was signed. The Executive Order stated, “The United States and the world face a profound climate crisis. We have a narrow moment to pursue action at home and abroad in order to avoid the most catastrophic impacts of that crisis and to seize the opportunity that tackling climate change presents. Domestic action must go hand in hand with the United States International leadership, aimed at significantly enhancing global action. Together, we must listen to the science and meet the moment.” The order contains a substantial amount of information about climate change and established a climate office, a national climate advisor, a climate committee, and it directs the federal government to direct focus on climate change. The order also hit the pause button on new oil and gas leasing, which according to the U.S. Department of the Interior, did “not impact existing operations or permits for valid, existing leases, which are continuing to be reviewed and approved.” The department also stated that it did not “restrict energy activities on private or state lands, or lands that the United States holds in trust or restricted status for Tribes or individual Indians.” The department’s fact sheet stated the action was to provide a chance for a review on the federal oil and gas program to ensure that it serves the public interest and to restore balance on America’s lands and waters to benefit current and future generations.

To help with the fight on leasing, Milato said there is legal precedence due to a 2010 case and said local companies worked with the Department of Interior and the Trump administration to issue an opinion that said the contracts were those that the companies entered and they had the right to explore and develop leases. Another milestone was when Louisiana Attorney General Jeff Landry, along with 12 other states, filed for an injunction in March on the pause of the leasing program to overturn the Biden administration’s moratorium on leasing. The 13 states in the lawsuit said the administration bypassed comment periods and other bureaucratic steps required before such delays can be undertaken. They said a long-term halt to oil and gas sales would curb future production and could hurt states that are heavily dependent on the industry that has contributed to global warming. Stopping leases, the lawsuit argues, would diminish revenue that pays for Louisiana efforts to restore coastal wetlands, raises energy costs, and lead to major job losses in oil-producing states. The injunction was granted on June 15th, which Milito said was a big deal because, for that to happen, one has to prove the plaintiff has a substantial likelihood of winning the case, proof of irreparable harm, along with many other factors. Landry said in a statement, “This is a victory not only for the rule of law but also for the thousands of workers who produce affordable energy for Americans. We appreciate that federal courts have recognized President Biden is completely outside his authority in his attempt to shut down oil and gas leases on federal lands.” Despite the injunction being put into place, Milito said it’s not the final decision. It essentially sends a message to the federal government, and he said we are still in a period of uncertainty.

NOIA has advocated for the industry for nearly 50 years and has now expanded to study wind energy. The association does not view wind energy as a competition or conflict, “what we have seen is the supply chain companies that have built up the Gulf of Mexico oil and gas sector, many of those same companies are stepping it up to help build up the Atlantic offshore wind sector.” He said that if businesses can add on to what they do in the Gulf of Mexico and sustain it to keep it going, the Atlantic, Pacific, and the Gulf of Mexico will present additional business opportunities. He said wind is a power source that could provide opportunities for clean energy that helps create better energy independence.

Milito concluded, “NOIA is doing everything we can to defend and protect the Gulf of Mexico because it is such an important element of our country, our oil portfolio, and the Gulf Coast. We have this treasure of the Gulf of Mexico oil and gas development that has served this country so well for decades, and it is our job as NOIA to stand up there in Washington to protect it and do what we can to make sure that it continues to thrive.”

For more information about NOIA and to read more about its mission, visit www.noia.org.