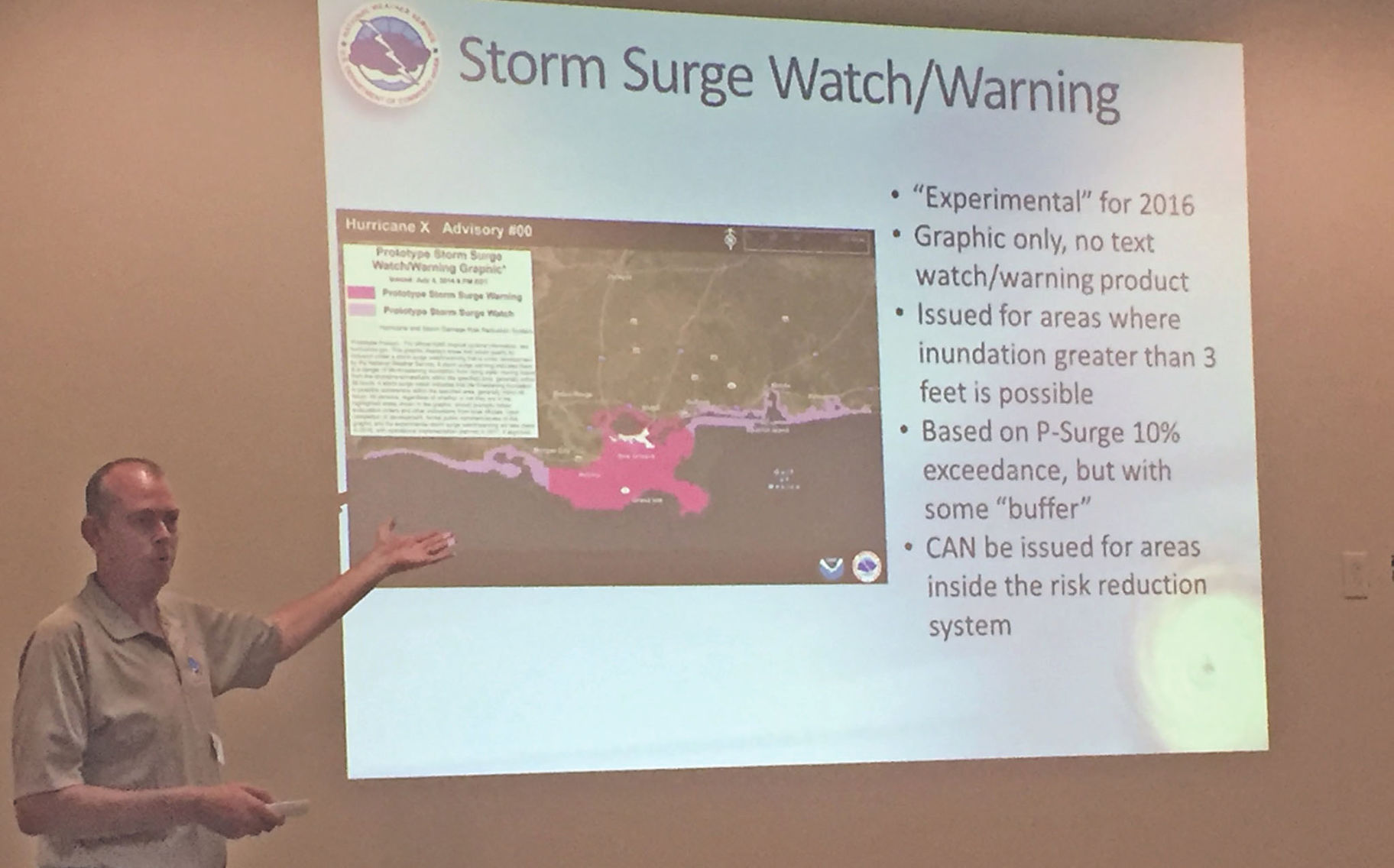 Ken Graham, meteorologist- in-charge at the National Weather Service New Orleans office, briefed parish officials on the unpredictability of storms and the value of a clear and flexible plan for evacuations. He also announced a new experimental storm surge warning map the NWS is using this year.

The NWS’s lead meteorologist said communicating the risk is a key factor in protecting the public. According to Graham, leaders must make residents look beyond just the category of the storm or its current projected path. Both the strength

and direction are always subject to change, and weaker, slow-moving storms can still drop massive amounts of rain in an area. Graham used his own living situation in Slidell as an example of challenging one’s false sense of security.

“My house has never flooded. But when I look at the studies, there are many, many storms that could get me. They just haven’t happened yet,” he said.

According to Graham, the NWS is rolling out a storm surge warning for the first time this hurricane season.

The experimental measure will not include rain or flooding estimates. Any coastline that could receive at least 3 feet of surge will be under warning. Graham hopes the warning will convince more people to evacuate in the face of uncertain storms – those in which a shift 30 miles east or west could drastically change an area’s surge outlook. NWS data has storm surge as the leading cause of death between 1963 and 2012 in the U.S. Atlantic storm seasons, accounting for 20 percent of the total direct and indirect deaths.

Lafourche department heads were asked to cut down their storm preparation exercises to 48-hour scenarios. Graham said such exercises would limit parish response, but they help develop flexible plans in the face of quickly-changing situations. He cited storms like Hurricane Audrey in 1957, which did not get a name until 48 hours before landfall and still landed as a Category 4 storm. Hurricane Camille, 1969, was a tropical storm 80 hours before landfall and managed to reach Category 5 intensity. Hurricane Gustav sped up after developing, making landfall 12 hours earlier than expected. With storm situations never set in stone, being ready to adjust on short notice is critical, Graham noted.

“This is the part we don’t remember. We remember the impact and response and recovery, but stress those plans. You probably have a five-day plan, is what my guess is. Make it two and see what happens. I think it’d be healthy to do that exercise,” he said.

Pam Roussel, regional coordinator of Region 3 with the Governor’s Office of Homeland Security and Emergency Preparedness, said state officials will make decisions on hiring contract buses for evacuations as early as 96 hours before a storm’s predicted landfall.

She said one issue leaders face is convincing people to err on the side of caution and leave before the threat is imminent.

“Residents will be asked to leave when the sky is blue and it’s H-minus 60 hours before tropical storm force winds hit Plaquemines Parish. It’s real hard to get residents to leave when you’ve got blue skies,” she said.

Lafourche Councilwoman Luci Sposito reaffirmed Roussel’s call for urgency among residents to leave well in advance of a storm to avoid the sloth-like travel during contraflow. Although Sposito represents the northwestern area of Lafourche, she said her district is still part of the frontlines facing the storms.

“Those few feet above sea level that we have in the northern parish doesn’t make me feel safe, for sure,” Sposito said. “I know a lot of people in the lower part of the parish move up to the northern part. I think we still need to be as cautious just as much as if we were in lower Lafourche.” •