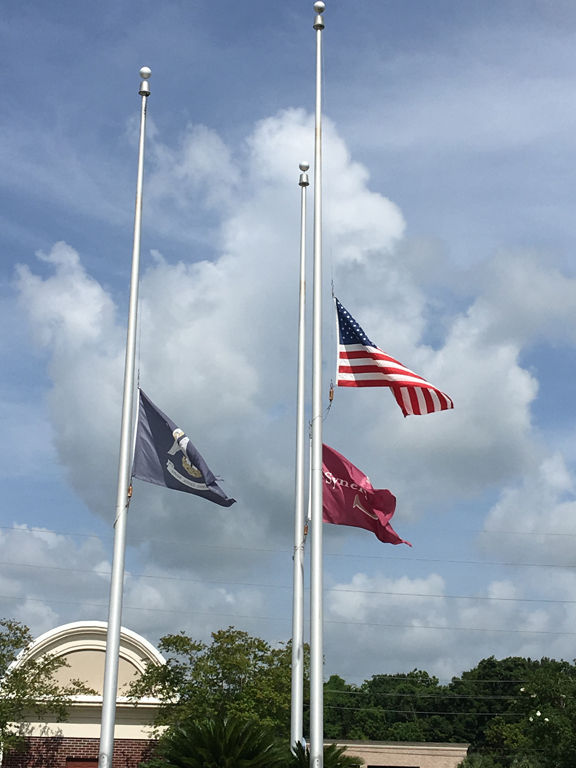 Orlando: Local signs of respect and efforts to help

At the junction of Martin Luther King Boulevard and West Main Street in Houma, small gusts of wind caused the U.S. flag in the parking lot of Rouses Market No. 6 to slowly luff. The fabric’s movement gave it a more dramatic personality than usual, perhaps because the flag was lower, therefore bigger, and its dance of grief therefore easy to see.

Like many flags throughout the Bayou Region, the one at Rouses was lowered as a sign of mourning and respect for 49 lives lost Sunday in Orlando, during a now well-chronicled murderous rampage.

President Barack Obama ordered flags on all federal buildings to be lowered until sunset Thursday; Gov. John Bel Edwards ordered Monday that Louisiana state and local buildings fly theirs at half-staff as well.

Most local government buildings were in compliance, and as usually occurs many private owners of businesses and some residences followed suit. They are not required to do so, but usually do.

Not all U.S. communities joined in the gesture, at least initially.

According to verified published reports, officials in Cole County, Missouri, had voted 2-1 against lowering their local flags. The decision raised a ruckus and the matter was re-thought; the flags now fly at half-staff.

Officials had initially said that what amounts to an expansion of the practice – barring protocols in the U.S. Flag Code – eroded the luster of the solemnity.

“It was a horrible tragedy to begin with,” Borne said. “When we heard that the president ordered that the flags be lowered at all government facilities and the governor of Louisiana did the same thing, we always try to follow suit. In this case, it is a sign of respect and condolence for the victims and their families.”

“As a community bank we feel it is important that we stand in unison with our communities here and around the country when tragedies like this occur,” said Kim Elfert, vice president of human resources and marketing. “Flying our flag at half-staff is a visible sign of due respect to the victims and their families.”

That the mass murder took place in a bar that was part of Orlando’s gay community has made for special identification among some local residents, and the gesture of flags at half-staff is noticed.

Randy Cheramie, owner of the Main Street Lounge in Houma, the only known gay bar in Terrebonne Parish, is among locals who took special comfort from the sight of half-staff flags.

Cheramie said his employees and entertainers are preparing to play a direct role in raising money for a specific family affected by the attack.

Lauri Melendez, the sister of Leonel Melendez, who was shot in the head during the massacre, reached out to local friends, including some in Houma, for assistance with medical bills and other expenses.

The rules for flying flags at half-staff are contained in the U.S. Flag Code.

They include the provision that when this occurs, the flag must be raised to its full height and then lowered, not raised just to the half-staff position.

The custom of half-staff flags dates back to the British Empire’s navy. According to reference sources, the custom denotes that an invisible flag of death is flying above the national flag.

According to the American Flag Manufacturer’s Association, half-staff is the point “midway between the top and bottom of the flagstaff.”

“The flag is flown at half-staff by order of the President of the United States upon the death of principle figures in the national or state government, other officials, leading citizens, or foreign dignitaries, as a mark of respect to their memory,” the organization’s compendium of the rules states. “The governor of a state, territory, or possession may also proclaim that the national flag be flown at half-staff.”

Private citizens and non-government buildings may fly flags at half-staff to honor local leaders or organization members. There does not need to be an authorization for this to be done.

Although the U.S. Code contains rules and customs regarding flag displays, there can be no penalties for citizens who don’t follow them. Doing so, courts have ruled, would violate the First Amendment to the U.S. Constitution.

For flags that can’t be lowered, often flown at homes, the American Legion says that attaching a black ribbon or streamer to the top of the flag, below the finial, is an acceptable alternative to flying at half-staff. The ribbon should be the same width as a stripe on the flag and the same length as the flag. If one flag is at half-staff in mourning, other flags flown with it should be removed or also flown at half-staff.

Flags fly at half-staff on Synergy Center Boulevard in Houma, at Synergy Bank.