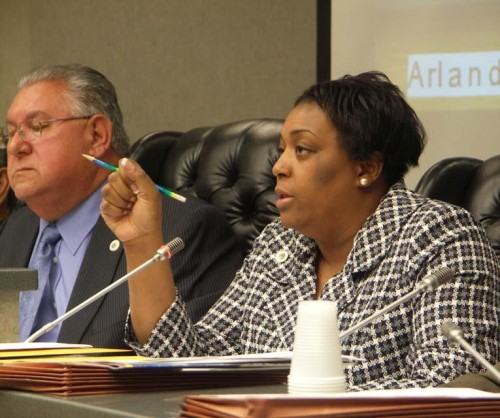 A late add-on to the Terrebonne Parish Council agenda drew unexpected resistance last Wednesday when the individual presenting a unification resolution, and making an appeal to act quickly, received a scolding from council members because of the timing of her presentation, the hour of day a scheduled congressional redistricting meeting is being held – 10 a.m. Monday – in Houma, and questions as to whom she represented.

Gwen Theriot, who eventually claimed she was part of a grassroots effort to promote the formation of a coastal congressional district, asked council members to back a resolution stating that they support the formation of such a district and demand the keeping of Terrebonne and Lafourche parishes in the same area of representation.

It was only after her presentation, and several efforts by council members to get her to say specifically who she was speaking for, that Theriot told to the Tri-Parish Times that she was part of a group organized by state Rep. Joe Harrison.

“I guess I am,” Theriot said when asked directly if she represented Harrison, who originally designed a proposed map for Louisiana after the state lost a congressional district based on the 2010 Census.

Harrison, in contrast, said the following morning that Theriot does not represent him, although she supports his district design.

“She came to see me a couple of weeks ago about volunteering to help with the plan, because she was a council person, I believe, in Lafourche Parish and wanted to see if there was any way she can help promote a coastal plan. She said she would be attending these meetings promoting the plan. I drew that plan. I wasn’t aware that Ms. Theriot was going to that meeting in [Terrebonne Parish]. I am promoting a coastal district, yes. As for her working for me, no,” Harrison said in a telephone interview from Washington, D.C.

Theriot is not on the Lafourche Parish Council nor is she in anyway officially involved with that government body.

“She’s the leader of this group that has been going around getting this resolution passed in different places,” Rep. Jeff Landry spokesman Millard Mule said. “Joe Harrison is the guy who came up with the plan. [Theriot] doesn’t work for us. There is a group of them out there that are really pushing the plan and getting these resolutions passed.” Mule stressed that Landry does support the Harrison’s congressional design for a unified coastal district.

On Thursday, Terrebonne Parish President Michel Claudet said he was left with the impression that a spokesman for Landry wanted to make an add-on presentation when he accepted a telephone call the previous morning from Landry Chief of Staff Phillip Joffrion.

Claudet said that it was after 10 a.m. last Wednesday when Joffrion, on behalf of Landry, requested that parish leaders go on record supporting the coastal district concept. “He asked if we could get a resolution on our agenda,” Claudet said. “I knew it would have to be an add-on [at that late date]. He said he could have somebody show up [to the meeting]. Then that lady turned out.”

Prior to being Landry’s chief of staff, Joffrion worked as the congressman’s campaign manager in 2010. Before that he was political director of the Louisiana Republican Party, and he also served as a regional field director for Gov. Bobby Jindal’s 2007 campaign.

Claudet, thinking that someone from Landry’s office, or perhaps Landry himself would be present for the council meeting sent a memo to Council Clerk Charlotte Poche and Council Chairman Clayton Voisin that reads: “Congressman Landry is requesting that this resolution be passed by us so we will have it for the Redistricting Meeting to be held at the civic center on the 21st. Unfortunately, it would have to be an add-on for tonight.”

Council members welcomed what they thought would be an opportunity to speak with state and possibly federal officials about their concerns and support of a coastal congressional district. Several expressed disappointment that their expectations were not met.

Theriot’s presentation drew added fire from council members who supported the idea of a coastal district but wondered who was behind the resolution that read, as it’s only reference of identification, that: “Terrebonne Parish Consolidated Government urges the Louisiana State Legislature And [sic] Governor Bobby Jindal to create one Coastal [sic] congressional District [sic] so that Coastal [sic] Louisiana can be represented by one voice in Congress whose priority is our coast and the commonalities that bond our communities.”

Councilman Alvin Tillman, who along with councilpersons Arlanda Williams and Billy Hebert, cast the only votes of resistance to adopt the resolution, said that the only reason these three opposed it was because Theriot did not give a clear answer during questioning as to whom she represented.

“To listen to her, something just wasn’t right,” Tillman said on Thursday. “You ask her questions and she can’t explain the questions. She can’t articulate what she has here. Then you ask her something about the document and she said, ‘Oh, I don’t know, they just gave it to me.’ Well, who are they?”

Tillman said part of what concerned him and other council members was the impression Theriot gave that she was connected with Landry’s and Harrison’s offices. “Had she been a bit more forthcoming and those officials would have been there I believe it would have been a different outcome,” he said.

Council members Teri Cavalier and Johnny Pizzolatto thought Theriot perhaps was somehow connected with having designed the schedule for congressional redistricting public hearings that are to take place across the state between Feb. 17 and March 1.

“By scheduling [the redistricting public meeting] for 10 a.m. you’ve cut out a very large segment of society. I’m a teacher. I’ve got a four-year degree. I’ve got enough sense to know what’s going on to completely cut me out of the picture,” Cavalier said during the council meeting.

“My boss does not think because you are a council person you have all the free time in the world. I don’t make the ribbon cuttings. I don’t make the grand openings. I have to work. My peers work anywhere from 8 a.m. to 3 p.m. or 8:30 a.m. to 4 p.m. And it is unfair for people to think that something so important as this can be handled at 10 a.m.

“I am offended by it and speak for other people who would like to be coming to this. But I have to wonder if they are maybe trying to cut the part of society that is educated out of the picture. The people who will be at this meeting are people who are interested and have a reason for being there. But they are also people who have the means to leave work and be there.

“If I take personal time to attend this meeting I have to take the whole day. So, you’ve cut me out of this process. … This is not fair to the public that works, the public that pays taxes and the public that took time to get an education so they could make responsible decisions,” Cavalier said.

Pizzolatto suggested that Theriot change the meting time to accommodate more people. He also added his doubts that a public meeting would make any difference once elected officials get their hands on redistricting maps.

“These ideas are going to change tremendously. Regardless of what we say politics is going to take over and that’s how the districts are going to be drawn,” Pizzolatto said. He supported the resolution because, in his words, “It’s an idea.”

Councilman Kevin Voisin echoed the concern surrounding the time of day the redistricting meetings are taking place and pointed out that meetings in other communities have been scheduled for 6 p.m. “Come on down to bayou country and we’re going to put it at 10 a.m., when we know everybody is at work,” he said. “I read the resolution and it basically says we share one common interest. [But] every time we don’t stand together as coastal parishes we’re strung. I want to make sure we stand together this time.”

“My question is who is requesting [we adopt] this resolution?” Williams asked Theriot. “Is it Mr. Landry?”

Theriot fumbled in her answer. “We have talked to every parish in District 3 .. um … this resolution has been passed in St. Mary’s, St. Martin’s, Iberia, Lafourche … um … St. Charles is bringing it up on their agenda, St. Bernard … Port Commission passed it this morning, Plaquemines … Congressman Landry has supported it in all of his comments to the media. And um, yesterday, Sen. Vitter sent out a letter in support of Lafourche and Terrebonne being put together in the same congressional district along with other coastal parishes. So it does have support. A lot of support,” she said.

“I do see the need for a coastal district and support it,” Williams said. “I would have been more comfortable if our state delegation had come to present this. But there have been too many articles about the congressmen who may have to run against each other fighting and I don’t want to be in a political pull between Congressman [Charles] Boustany and Congressman Landry. So that is why I ask the question, ‘where does this [resolution] come from?’

“I don’t question the intention because I know the coastal parishes need to stick together [and] Lafourche and Terrebonne want to be part of the same district. But I would have felt more comfortable hearing that same sentiment coming from our state delegation, who in fact has the final say so,” Williams said.

“When we look at Terrebonne Parish and drawing lines we’re looking at two or three options before making a decision. And now we’re making a decision for coastal without looking at our options or knowing what they are going to be. I would feel much better if our [state] delegation would have had some input into this [resolution].” Hebert said.

Theriot was located at a telephone number listed for the Bayou Lafourche Area Convention and Visitors Bureau. At that point, her story of identification had changed. “Well, yes, I am on my own. I don’t work for either [Harrison or Landry]. … This is just a concerned citizen supporting what they support. I answered questions as to where I got the information, but I never said I worked for anybody.”

Council members consistently said they support the concept of a coastal district, and even with their split vote, the council adopted the resolution of unknown origin, after a lengthy conversation. But never completely answered exactly who all was behind the document presented to them and the plea of urgency to act before Monday.

“In defense of the [parish] president and staff … Mr. Claudet was notified of this [add-on] effort at 10:21 a.m. [on the council meeting date],” Council Chairman Clayton Voisin said. “At 10:41 a.m. from Mr. Claudet [sent it] down to Ms. Poche and myself to notify us of the situation, so I mean if you guys think you’ve seen it late, we’ve all seen it late. It is what it is.”

“Public hearings just say what you do or do not want,” Williams said. “[Monday] is not our only opportunity for our voices to be heard.”