Sally slows off the coast; hurricane warnings dropped for our area 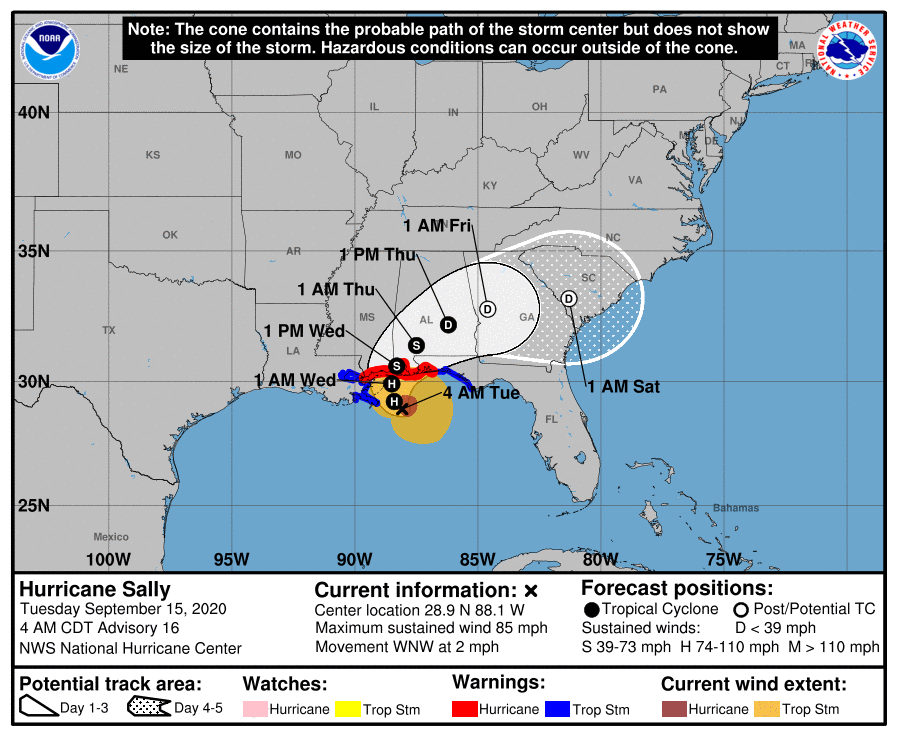 The 4 a.m. update shows Sally with max winds of 85mph, keeping it at a Category 1 Hurricane. Sally seems to be stalling, beginning a very slow crawl northward at 2mph.. Landfall now expected mid-morning-late afternoon Wednesday near MS/AL state line. The Hurricane Warning has been canceled for our areas, and replaced with a tropical storm warning. The Flash Flood warnings have also been canceled. We are expected to see less than an inch of rainfall.

At 4 a.m. CDT, the center of Hurricane Sally was located about 60 miles (100 km) east-southeast of the mouth of the Miss. River and about 115 miles (185 km) south-southeast of Biloxi, Miss. Sally is moving toward the west-northwest near 2 mph (4 km/h), and this general motion is expected to continue this morning. A northward turn is expected this afternoon, followed by a slow north-northeastward to northeastward motion tonight and continuing through Wednesday night. On the forecast track, the center of Sally will move near the coast of southeastern Louisiana later today, and make landfall in the hurricane warning area tonight or Wednesday morning.

Data from the reconnaissance aircraft indicate that maximum sustained winds have decreased to near 85 mph (140 km/h) with higher gusts. – a category 1 hurricane on the Saffir-Simpson Hurricane Wind Scale. Hurricane-force winds extend outward up to 45 miles (75 km) from the center and tropical-storm-force winds extend outward up to 125 miles (205 km). Although little change in strength is forecast until landfall occurs, Sally is still expected to be a dangerous hurricane when it moves onshore along the north-central Gulf coast.