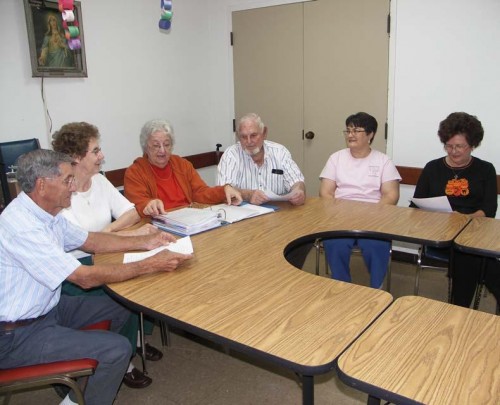 Tension over the closing of a senior center 19-months ago for removal of deadly mold has escalated from a “she said, she said” war of words, to written action that, if not heeded, could result in litigation.

“That’s what it is,” Terrebonne Council on Aging Director Diana Edmonson said of a letter dated Sept. 30, and delivered to the North Terrebonne Seniors Inc., when asked if the TCOA correspondence could be considered an order to cease and desist.

“When [TCOA] moved us out they said they had mold in three places,” NTS spokeswoman Patsy Evans said. “Schriever, we had to get out, Shady Acres never moved and [the TOCA] operations center. You know the only people that’s still out? Schriever.”

In March and April of 2010, inspectors found evidence of stachybotrys, a deadly mold that causes bleeding in the lungs, in the three buildings owned by the TCOA. Steps were taken to address the mold issue at the TCOA center on Tunnel Road, Shady Acres on West Main Street and the Schriever Senior Center on Highway 311. Schriever had the largest amount of mold and has proven to be the most difficult site to repair.

Edmonson previously explained that the mold severity levels and nature of usage that differs between the three locations could be considered part of the reason construction crews have been unable to complete the Schriever center as quickly as the other two properties.

Evans claims Edmonson has a prejudice against people who use the Schriever center and wanting to keep them out has been the motive behind reported mold removal problems, job bidding snags and construction delays.

During the course of time, NTS members, according to the TCOA, have given the public an impression that the NTS was forced from property it owns. This argument is based, in part, on interpretation of phrases used by Evans that include, “They locked us out of our center.”

Members of the TCOA Board of Directors said they want to put an end to the confusion. Their letter, signed by TCOA Board Chairman Carroll D. “Cal” Mickey, provided by Evans and confirmed to be authentic by Edmonson, clarifies the relationship of TCOA to other senior organizations, specifically NTS, whether or not they participate in activities at senior centers owned and operated by TCOA.

“North Terrebonne Seniors Inc. is completely separate from and unrelated to Terrebonne Council on Aging and the Schriever Senior Center,” the TCOA letter said. “The Schriever Center is owned by and is a part of TCOA, not the [NTS]. … Nor is [NTS] in any way a part of or connected to any other TCOA Senior Center or other property. … It is important that neither [NTS] nor any of its members act or speak in a way which would lead someone reasonably to believe that [NTS] is acting or speaking as part of, an agent of, or in behalf of TCOA or the Schriever Senior Center, or any other TCOA senior center. [NTS] must not, including through any of its members, hold itself out as representing TCOA or any of its senior centers.”

The three-page letter expresses in detail the relationship between TOCA and any outside agency that may be in part participating in activities at the council’s properties. The correspondence addresses whom may or may not use TCOA resources, solicitations performed in relation to the TCOA and proceeds secured under the identity of TCOA.

The letter then addresses relationships between outside sources and TOCA employees, including center managers, which Edmonson described as having at times escalated to the point of harassment practiced by Evans.

“Any intimidation, bullying or harassment of any TCOA or Senior Center personnel or members or clients is strictly prohibited,” the letter said. “Persons who violate this very important rule directly or indirectly are subject to being excluded from the center.”

Edmonson explained that the mission of TCOA is to address the needs of low income elderly persons. Although older residents of a given area are welcome to participate in many TCOA events, the TCOA Senior Centers are not intended to be used as social halls for the affluent. “They want to have these big $1,000 meals. We can’t do that. That’s not what we are about,” she said. “We are a service-oriented agency, not a country club.”

Another concern, in the case of the Schriever Center, according to TCOA officials, are situations when meals have been delivered for use of poor elderly residents of the area, and seniors from communities in Lafourche Parish have come to the Schriever Senior Center expecting to benefit from what is available.

“We are not sanctioned to assist anyone other than residents of Terrebonne Parish,” Edmonson said.

When asked about Lafourche Parish residents that travel to Schriever for meals or other services, Evans said that those who do so have been grandfathered in by the NTS. “We don’t have that many that come here [from Lafourche Parish] anymore,” Evans said.

Since the closing of the Schriever Senior Center for mold removal and remodeling, NTS members and other area seniors have been meeting at nearby St. Bridget’s Catholic Church.

Evans has expressed doubts regarding the intention of TCOA on rebuilding the Schriever Senior Center and claimed Edmonson does not want it to reopen.

“That’s not true,” Edmonson said. “It is not right. I am hoping we have it opened for Christmas.”

“The building [ownership] has never been the debate,” Evans said. “[Edmonson] assumes we have been taking things from the senior center. When we have senior socials we have them someplace else, because we didn’t want to hurt anybody’s feelings.

“I wasn’t going to bring up the letter,” Evans continued, “but it has caused a lot more confusion because we are finding out from other people that other centers are not treated the same way as Schriever. I bet you [that other center organizations] never got this letter. Other things are being forced upon us so we won’t think about getting back into the center.”

The TCOA letter states that the conditions described have been in place as long as the Schriever Senior Center has been in operation since the mid-1990s, and are consistent with guidance provided by the Governor’s Office on Elderly Affairs.

Members of the North Terrebonne Seniors meet in a conference room at St. Bridget’s Catholic Church in Schriever to discuss their next move in an attempt to regain access to the Terrebonne Council on Aging Schriever Senior Center. MIKE NIXON