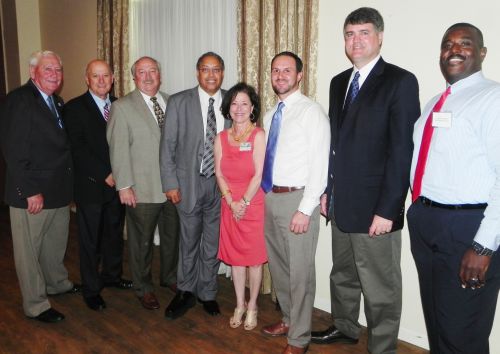 St. Mary Parish continues to improve its infrastructure, while the parish’s west side is upgrading its fire and flood protection.

That’s the message all five mayors of the parish’s municipalities provided at the recent first-ever St. Mary Parish Chamber of Commerce Mayor’s Luncheon.

According to Frank “Boo” Grizzaffi III, who has held the Morgan City mayor post for only four months, the city is mid-way through a $4 million road reconstruction project.

“After spending roughly $3 million to resurface our major thoroughfares, we’re going to spend the remainder tackling the less-traveled areas of the city,” he said.

Morgan City has also launched an internal 18-month, $400,000 software installation that, when complete, will allow customers to view and pay their utility bills by credit card over the Internet.

The city’s long-awaited $1.2 million transformer – a replacement for the 100-megawatt transformer that caught on fire last summer, subsequently causing rolling blackouts across the city for nearly a month – is expected to arrive in June, Grizzaffi said. The city intends to install $387,000 worth of utility breakers as added protection.

The mayor also said Morgan City will begin renting its lake houses this month. The project, located adjacent to Lake Palourde on the shores of the former Federal Emergency Management Agency trailer park, was funded in large part with $500,000-plus in grants from the Department of Natural Resources and the Atchafalaya Basin Commission.

Before year’s end, construction of three additional lake houses is expected to start.

“Our goal is to grow Lake End Park into a serious financial resource,” Grizzaffi said. “Morgan City is the flagship of this parish and we want to keep it that way.”

In Berwick, Mayor Louis Ratcliff said the town is primed for growth with 33 residential lots available for construction.

“If you are in the market for a new home, I invite you to look at Berwick,” he said.

Likewise, Patterson Mayor Rodney Grogan told chamber members that his town is growing because it “has a community plan and not an individual one.”

Grogan said when he first took office, many wanted Patterson to keep the town a “bedroom community,” but that is changing.

Using a $35,000 state grant, Grogan said he is considering creating a cultural district.

Plans are also under way to install infrastructure on 120 acres of available land, making it more attractive to buyers, the mayor said.

“We’re also going to install an electronic water meter system,” Grogan said. “Our city showed the only population growth in the parish – 1,000 persons – in the last Census. And we’re preparing for more growth. We want to house some of the 6,000 people that work in the parish every day but leave because they reside elsewhere.

“When we’re done, Patterson will no longer be a bedroom community,” he vowed.

More exciting, he said, is the nearing June completion of a $4 million floodgate system.

Harris said the city also just completed a $2.7 million upgrade to its water plant and water tank. “So, we’re keeping as busy as the black bears that keep migrating through our wilderness areas here,” he joked.

Harris also noted the city is spending $1 million on its 105-year-old headquarters. The site served as one of the parish’s first elementary schools.

Baldwin Mayor Wayne Breaux, who will have served as mayor for 22 years at the end of this term, is St. Mary Parish’s longest serving mayor.

“We are also celebrating our 100th birthday this year, and I feel like I have been here for most of it, having served as the town’s manager for 18 years before I became mayor,” he said.

He said residents are enjoying the town’s $2 million, 2-year-old community center. The facility seats 250 people and has two conference rooms with a 50-person capacity.

“If you ever need a facility on the west-end of the parish, please call us,” he said.

With a $1 million state capital outlay grant, Baldwin will soon dedicate its new fire station. And, according to Breaux, the town is conducting a $1 million levee construction study in key flood areas.