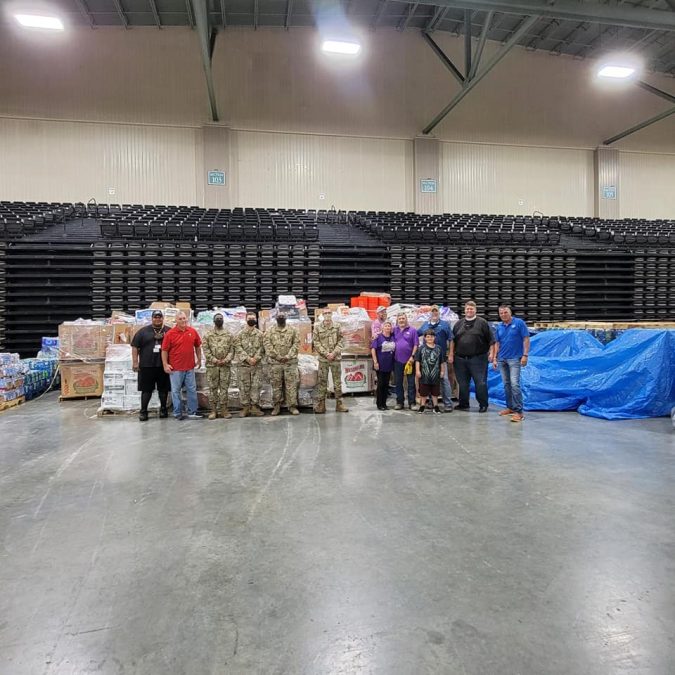 St. Patrick’s Episcopal Church is a small church that lies on a busy road at 1322 Church St. in Zachary, Louisiana. Father Ashley Freemen and the Zachary community have stepped up to deliver a 57’ Trailer of Love to Houma after Hurricane Ida has left so many in need.

The church was able to load a 57’ trailer filled with 56 pallets of supplies thanks to the generosity of many churches, a sweet elementary school, and their community. Father Freeman said the trucks of love were started in 2017 as a response to Hurricane Harvey. The church is located along a main road, so they simply placed a trailer by the road with a sign, and pushed the cause on social media. The community showed up, big time.

The church saw many disasters including a flood in 2016 where it left several hundred thousand dollars in damage, “Many in the community experienced damages in 2016, and we’re used to hurricanes and other disasters. It’s just the generosity of the community and I look at it as an opportunity to be a focal point for that generosity through the church,” Freeman said.

Father Freeman was able to connect with Dean Schouest, Director for the Houma-Terrebonne Civic Center where he was able to help distribute supplies to areas that need them most. Father Freeman recollected telling Schouest that he truly believes there is no such thing as bad people. We have a tendency to think everyone is either good or bad, but Father Freeman said we were all created in the image of a good God and are built to the capacities of good, and it’s inherent in all of us to do it. He said when situations such as Hurricane Ida occur where it causes so much pain and suffering, it tends to give us empathy and it is that empathy that allows us to want to reach out to help. “It’s a reminder to me at the end of the day that every human being is created in the image of a good God,” Father Freeman said, “ it’s inherent in them, and it’s goodness. That goodness is always looking for an opportunity to get out.”

He said he’s been through many disasters including 9/11, Hurricane Ivan, Hurricane Katrina, and so forth, but he said it’s through these hard times that draws people together. “It seems when things are going well, we tend to almost hate each other. We all fall into the habits of our political parties and our lenses,” he said. He quoted something he read, “You can safely assume you’ve created God in your own image when he votes and thinks the same way you do.” He said he thinks that it’s true, and it’s amazing when they do these supply drives because they have Baptists, Catholics, Atheists, people from different backgrounds participate. He remembers a phone call he received when the first drive took place in 2017, “I’m not an Episcopalian, can I still participate?” Father Freemen responded, “Man, I don’t care where you go to church or if you go to church, if you want to help others, then come on out!” Father Freeman said it all circles back to He’s inherent in all of us and there’s a desire in us to do good even when we don’t know that’s what we want to do.

The donation to Houma was the fifth truck donation of the cause. Besides Hurricane Harvey, they delivered three trucks last year after Hurricane Laura, one truck to Pensacola, Florida, and the Hurricane Ida truck this year. The donation drive grew over the past years and this year he said they had more and more community involvement. There was a local hospital that held a drive, and Rollins Place Elementary where the Principal Jennifer Marangos held a competition for the most supplies donated. The elementary school supplied 12 of the truck’s pallets!

Another large help in the Houma donation was other churches not only in the area but also across the country. Father Freeman said​​ “I have brothers and sisters at arm’s length that are right there. Not only did the churches step up, but the community of Zachary has come together to bring items.” The churches and schools included Episcopal High School, St. Luke’s Episcopal School, St. James Episcopal Church, and St Margaret’s Episcopal Church. They also had churches from across the country donate stuff such as churches from Kentucky, North Carolina, Oklahoma, and Texas.

Father Freeman said he thinks that one of the big motivators for him is that he is vividly aware of the reality that he has drastically more in common with everyone than he thought. “It doesn’t matter where they come from or who they vote for, what football team they pull for, what color they are, what gender they are, what sexual orientation..none of that matters. Human beings in the community will always have more drastically in common,” he said, “It’s that common humanity that we all have that binds us together in ways that we really can’t put words around it. We have to lean more into the reality that we are more similar than we are different…and love is a universal language.”