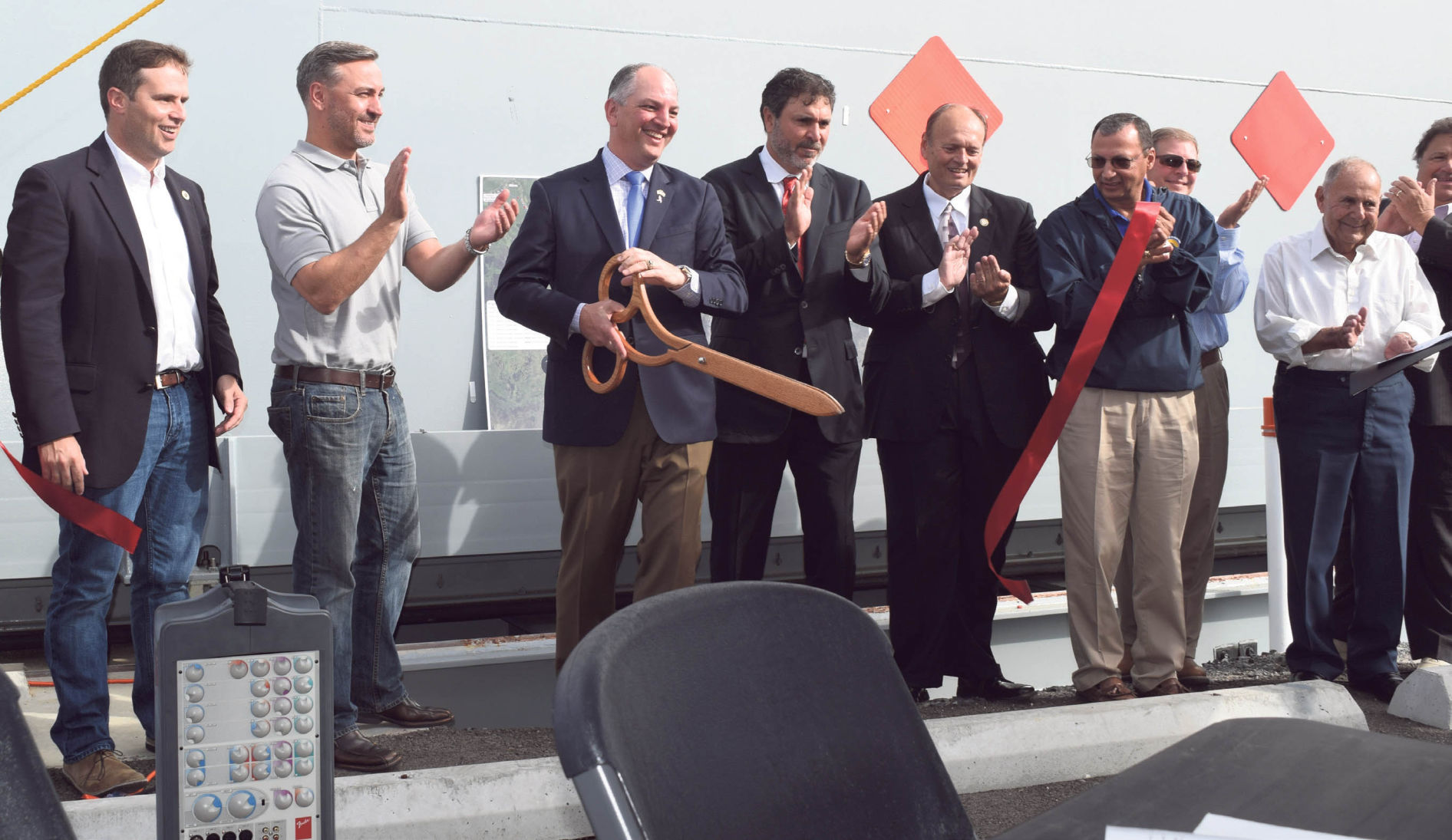 As another hurricane season comes to a close, Louisiana’s governor headed to southern Terrebonne Parish to celebrate one of its most important defenses against future storms.

Gov. John Bel Edwards joined state and parish officials at the ribbon cutting of the Bayou Petit Caillou floodgate in Chauvin on Thursday. The group reflected on how far Terrebonne and Lafourche parishes have come in building up its levee defense systems while noting how much more work lies ahead.

The nearly $20 million floodgate, completed in March of this year, lies at the southernmost point of the Morganza to the Gulf hurricane protection system. The project took a year-and-a-half of construction work after going to bid in late 2014 and provides critical protection to Petit Caillou communities like Chauvin. It has a 110-foot wide opening, will be able to function as an environmental control structure and includes a road gate for those passing through to and from Cocodrie.

Rep. Jerome Zeringue, who previously headed the Coastal Protection and Restoration Authority, praised the multi-layered value of the floodgate.

here. This is a project that’s taken into account building on ridges,” Zeringue said. “It’s going to have a structure using RESTORE [Act] dollars. It’s an environmental structure that, oh, by the way, will provide significant flood protection.”

Johnny Bradberry, current executive director of the CPRA, spoke about the floodgate as a testament to the combined efforts of the state and local parishes.

Bradberry said whenever Terrebonne Levee and Conservation District Executive Director Reggie Dupre or Parish President Gordon Dove approach his office, he knows they’re looking for money. However, Bradberry said their efforts are more focused and planned than most others in the state.

Tony Alford, TLCD board president, said a celebration was necessary, but reminded the crowd that work on protecting the parish is far from over.

“Let’s keep up the good work and keep moving ahead and celebrating a little bit about this and some of the other floodgates as we move to the west. Just remember, we’ve got a lot of work ahead of us,” Alford said.

Dupre detailed some of the work lying ahead. To the east of the Petit Caillou floodgate lies the Pointe- Aux-Chenes floodgate, which Dupre said is fully funded and set to go to bid in the next month. The main focus now will be on the system’s west side, though, with the levee district looking to construct and complete the Falgout Canal floodgate in

The levee district, which has funded projects entirely through local sales taxes and millages and state appropriations, currently has $31 million dedicated to the Falgout Canal project, leaving it $14 million short of its total cost. Dupre said the TLCD has budgeted about $30 million for constructing the floodgate itself, with the rest going toward building up adjacent levees. However, he noted the current oil and gas downturn has provided a silver lining of very competitive and cheaper bids, meaning the parish could find savings of up to $5 million on the floodgate’s cost. When completed, the Falgout Canal floodgate would connect the Morganza system along the parish’s five bayous, a longstanding goal for the levee district.

“We set a goal in 2008 to connect the five bayous of Terrebonne Parish together along the federal alignment. We will have met that goal by April of 2017. Next hurricane season that goal is now met,” Dupre said.

The second grade class from Upper Little Caillou Elementary, along with students from the High Achievers Student Enrichment Center in Houma, attended the ribbon cutting. Dove and others told the students they will one day carry on the mantle of protecting Terrebonne from future storms, noting how critical the floodgate they saw that day was to keeping Terrebonne’s culture alive.

“This is being built for y’all. This is protect you and your way of life that we’ve enjoyed, from shrimping to the oilfield to our different heritages,” Dove said. “We’ve buried our parents here, our grandparents and our kids. We’re here to protect it, we’re going to continue to protect it.” •