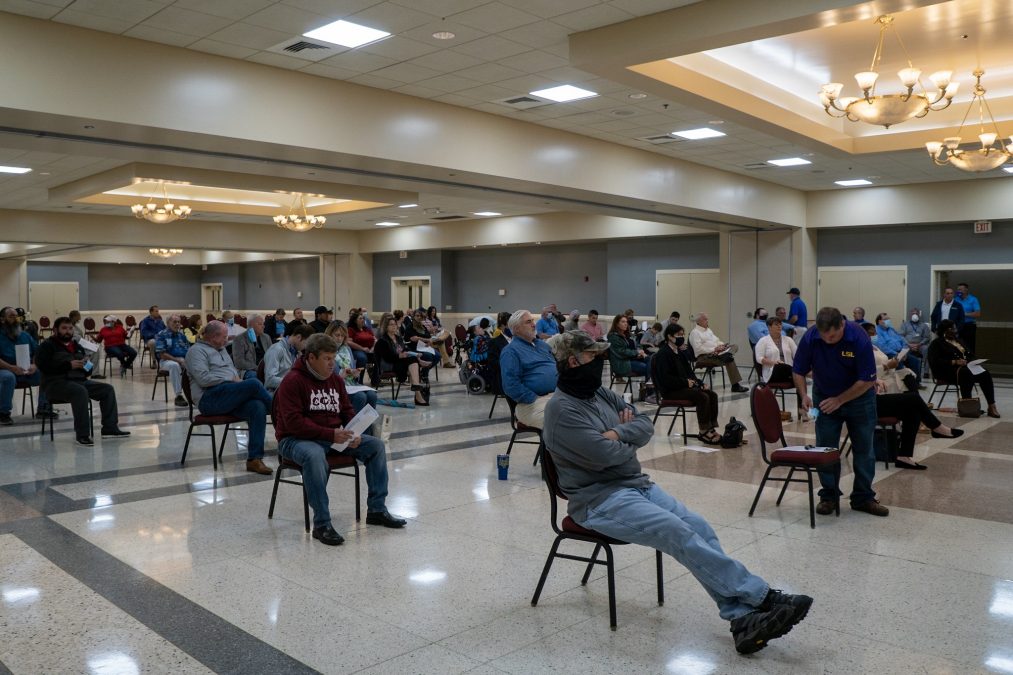 When the Terrebonne Parish Recreation Modernization Task Force was formed in September, its 18 volunteers were given a daunting task: examine every nook and cranny of parish-wide recreation and then create recommendations to better it — and they had just a 6-month timeframe to do it.

After long bi-monthly meetings (sometimes up to five-hours long), reviewing over 1,500 pages of documentation, listening to stakeholders’ concerns and suggestions and debating, the time had finally come for the advisory board to present its findings to the Terrebonne Parish Council and public.

“Open your minds,” Recreation Modernization Task Force Chairman Michael LaRussa said before presenting the report during Wednesday’s council meeting. “Let’s look for some change. If we don’t change, we don’t grow. It’s not that they were doing anything wrong; everybody was doing as best that they can. But there’s always room to grow.” 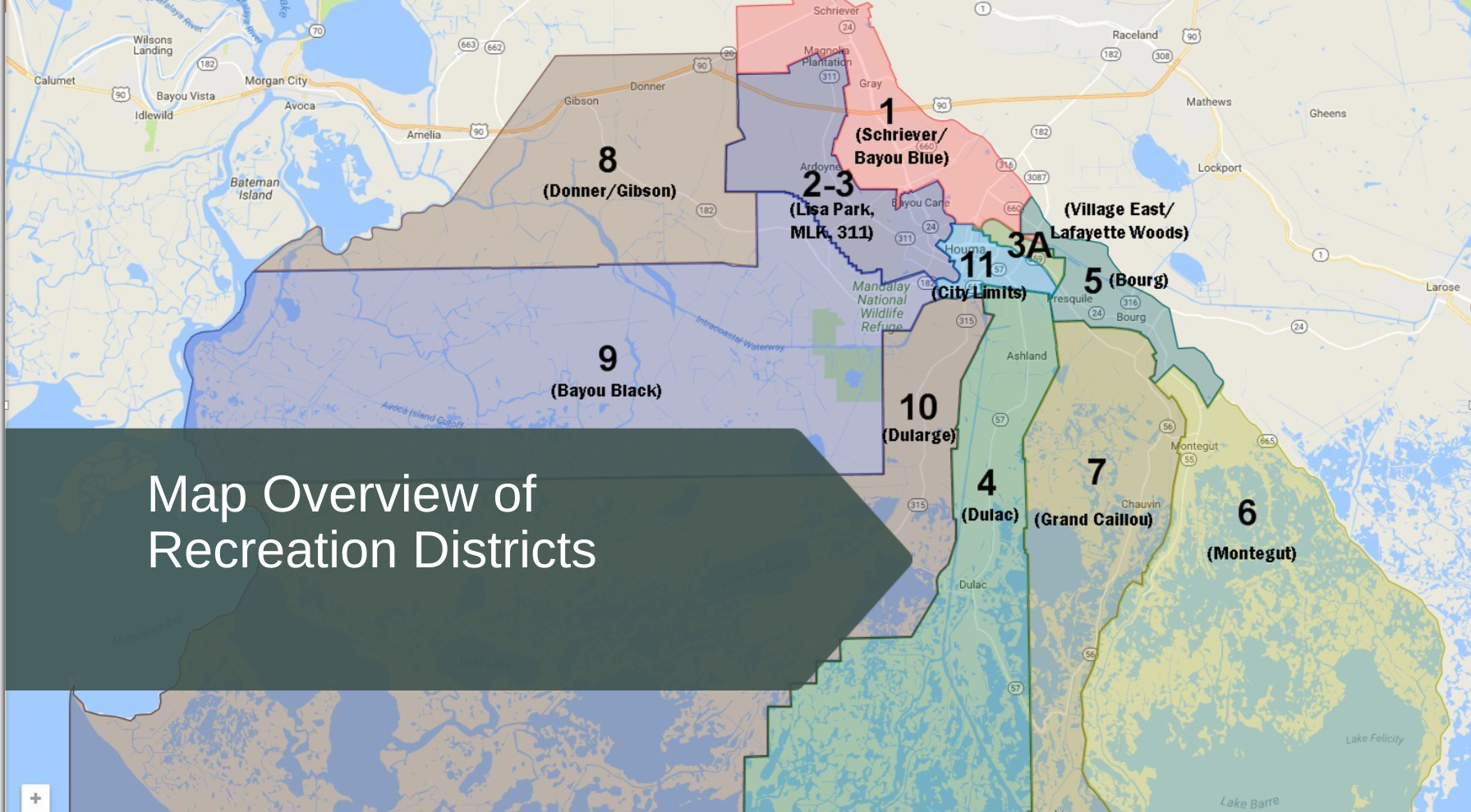 A map of the 11 Terrebonne Parish Recreation Districts. Each district has its own board to oversee its operations, maintenance and budget.

“My subcommittee was Section A. We dealt with existing boundaries, merging districts, vetted the complete consolidation idea, talked about merging and all those topics that flow with that,” Hebert explained.

In the advisory board’s charter, it was requested to consider consolidating all rec districts, a move that several council members have disapproved. The committee determined that total consolidation would not be in the parish’s best interest.

“The Board felt that the social and civic usage of recreational facilities in the bayou communities differ from the usages seen in the facilities in the other areas of the Parish. Of equal consideration was that the Board noticed that very little cross-district usage of facilities is occurring in the bayou communities, largely in part to community identity and lack of proximity,” the report reads. “Additionally, to arrive at a revenue neutral district, which the Board felt is important, the Parish-wide recreation millage would be just shy of 10 mills. This would represent a significant increase in recreational taxes for a large portion of the population. The combination of decreasing tax values and higher homestead exemptions in the bayou communities would exacerbate this problem over time.”

However, after evaluating multiple scenarios, the Board recommended that the parish submits to the voters an option to merge Recreation Districts 1, 2/3, 8 and 9, with a millage rate of 6.5 mills. (One mill equals $1 for every $1,000 of assessed property value.)

“While this recommendation is slightly less than being truly revenue neutral, the Board felt that the cost savings and efficiencies gained by combining these districts would overcome the small deficiency and still yield nearly $2MM [milion] in excess funding for capital improvements/community investments. There was concern that merging the districts at a lower millage call would leave too much financial uncertainty in the merged district, hence the recommendation of 6.5 mills,” the report reads.

Rec 2/3 residents would see a tax increase as they currently have a 5-mill rate. Councilman Gerald Michel, who represents portions of 2/3, argued that 2/3 residents would pay more in taxes in structural change but would get less funding for their parks. According to Michel, if the $2 million excess funding is dispersed equally, the district would bring in less than the approximately $750,000 in excess funding than it annually brings in now.

The councilman also noted the projects planned in the district that could be in jeopardy. “All of this money is coming from this excess fund, and if we consolidate, then 2/3 is not going to have those excess funds anymore. They’ll be at the mercy of these other districts,” he said. 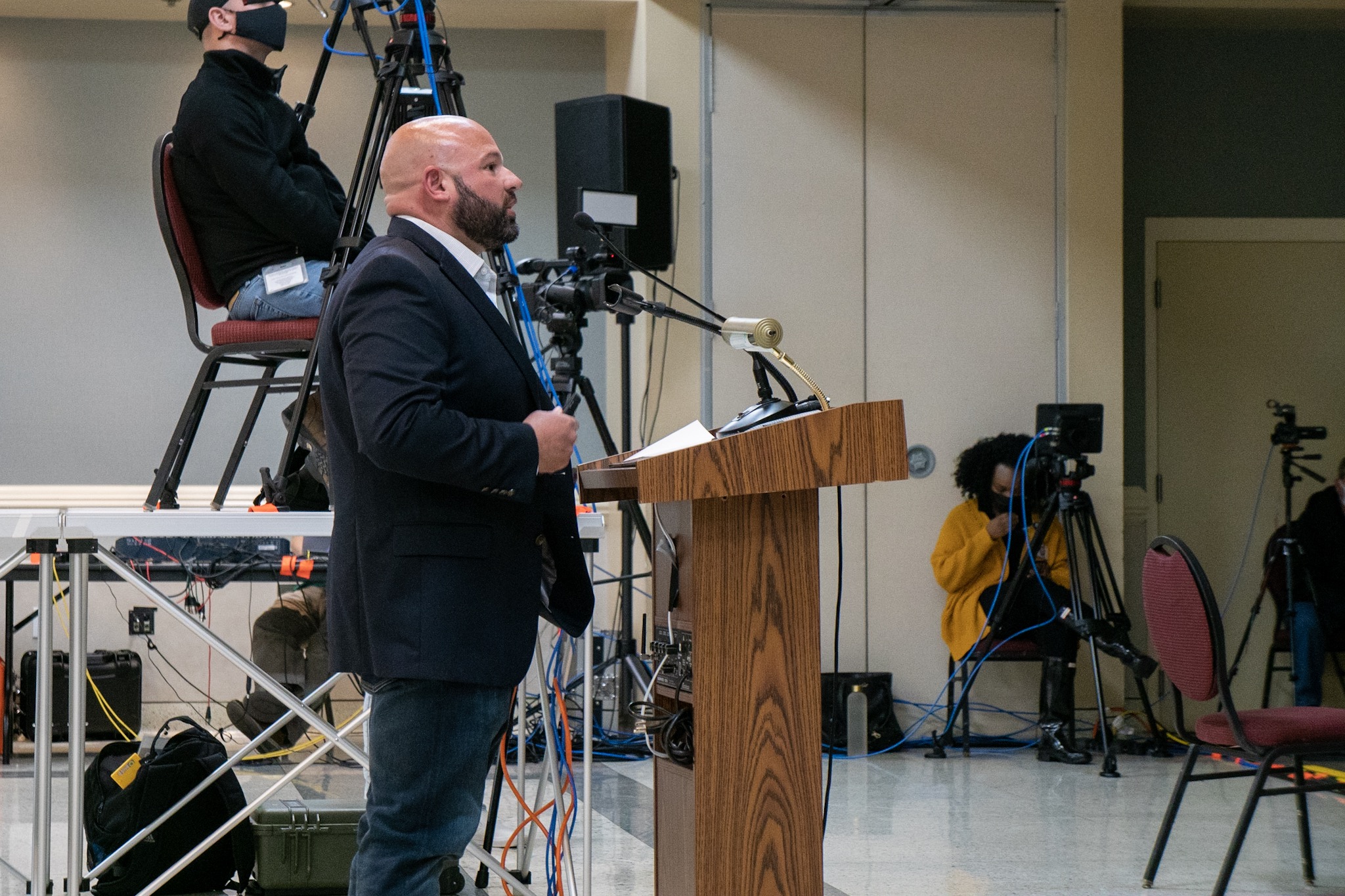 After the meeting, Hebert told the Times he understands Michel’s point, but he disagrees with it for several reasons. “First, our parish has proven what can be done when we come together.  The logic of keeping money in small pockets failed our communities in several aspects over the years.  As an example, we took that approach for flood protection for decades and it ended with thousands of homes flooding.  We came together, pooled our resources and created a much better system that serves the entire community, not just a few neighborhoods.  The same logic applies in recreation and quality of life,” he said.

Hebert also said that the Rec 2/3 millage renewal votes show the residents want more. The renewal failed the first time around and narrowly passed by 81 votes its second time on the ballot.

“I firmly believe that those two votes were about far more than the millage number on the ballot.  They were about an awakening of the residents and the desire for more.  As a resident of Rec 2/3, I would gladly pay a slightly higher rate, on average less than $20 per year — still the lowest in Terrebonne — for a larger quality of life focused element to be constructed today just over the border in Rec District 1, 8 or 9,” he said, “than have a smaller asset tucked away in a neighborhood in Rec District 2/3 to be constructed over years.”

He also highlighted that the facilities across North Terrebonne, as a whole, are “more easily accessed by Rec 2/3 residents than anyone else.”

One of the main reasons the task force recommended merging the North Terrebonne districts is the amount of “cross-district” usage, meaning residents of one community using a nearby facility that lies in another district.

Citizens of the proposed district voiced support for the plan.

Julia Bourque, a resident of Bayou Black (Rec 9), said where she lives “demarcates the issue of recreation in our parish. Bourque pays a 15-mill tax. One of her nearby neighbors pays 10 mills (Rec 11), and another one pays 5 mills (Rec 2-3), she said, “yet, we all use the same facilities.”

Rec 2/3 board member Ed Bice, who wasn’t speaking for the board but as a resident, also expressed his support for the recommendation at yesterday’s meeting and asked the council to leave it up to the voters. “I’m okay if my property taxes go up a little bit if it benefits the rest of the parish,” he said. “Please send it to the people. Let us decide what we want our tax money to go to.” 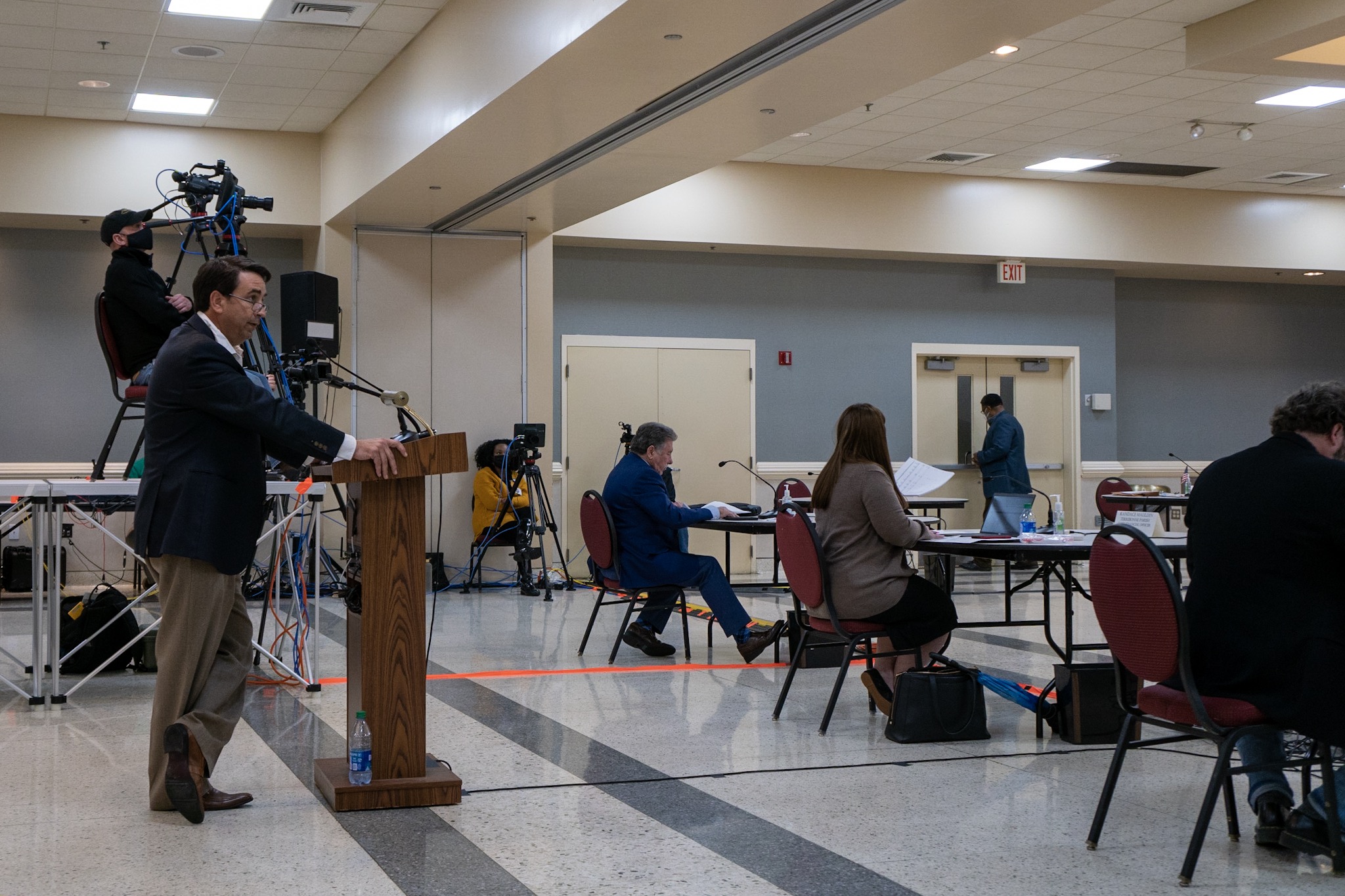 LaRussa’s presentation, Section B, included aspects of board efficiencies and accountability and TPR programming.

He highlighted such recommendations as an online centralized scheduling system for the entire recreation program, a comprehensive and coordinated 5-year master plan developed by each district, cooperative endeavor agreements be considered for large equipment purchases, all districts adopt and/or update their policy manuals that are standardized (wherever possible) across the board and a standing “recreation” section placed on council monthly agendas, among other suggestions.

Members of the council and the public alike commended the chairman’s recommendations on parish-wide consistency in recreation.

LaRussa, along with Hebert, also suggested that Air Base Park be placed into the parish’s control, lifting the burden of budgeting for the park’s maintenance and operations from Rec 11.

“It’s a complementary facility to Bayou Country [Sports Park]. The parish just spent over $600,000 on a beautiful splash pad on the Air Base, and I don’t think there’s any maintenance in [Rec 11’s] budget,” he said. “I think [putting it in the parish’s control] would help them.”

‘To Cheer Them On’ 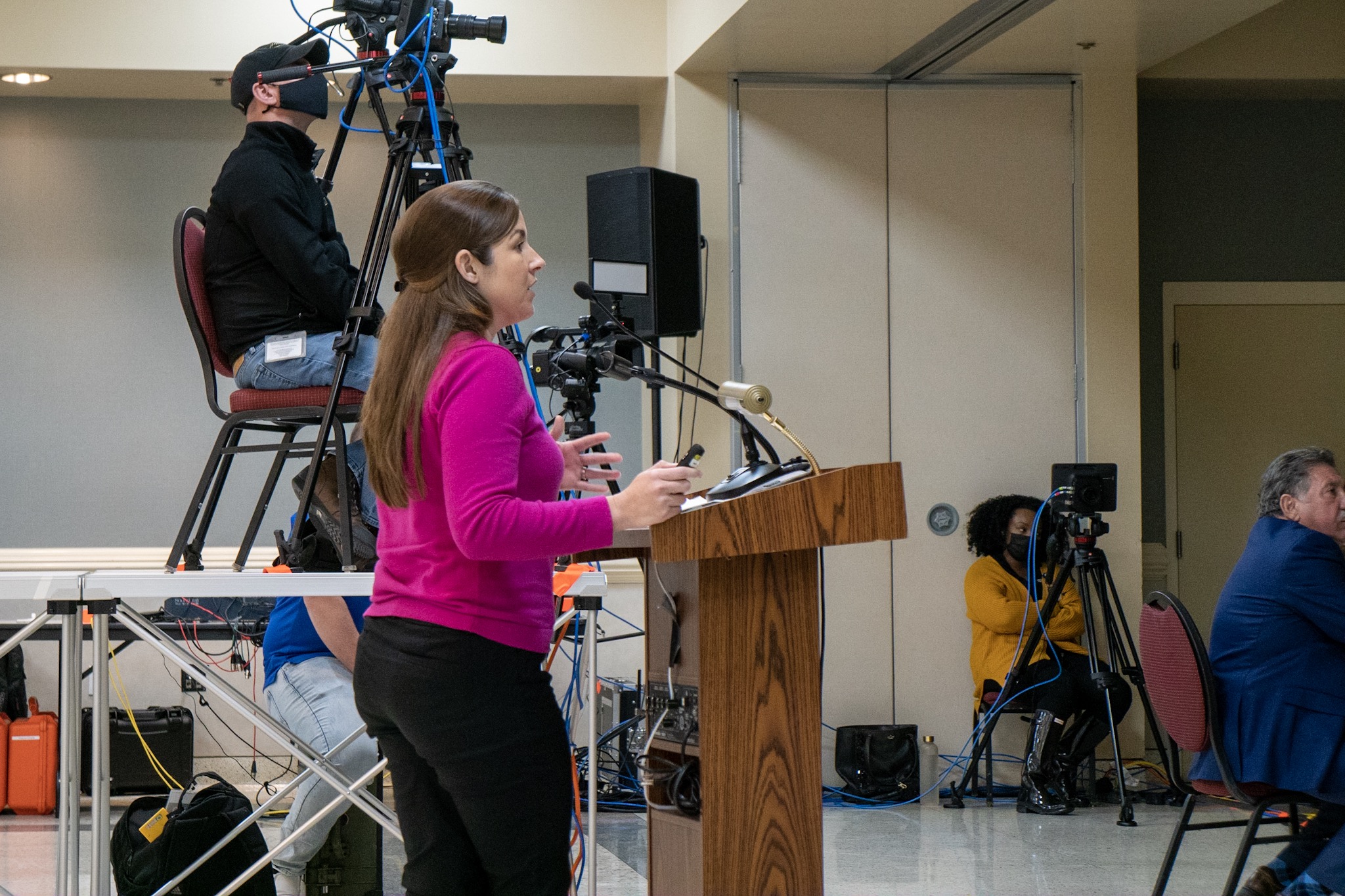 Recreation Modernization Task Force ad-hoc member Erica Lambert — who has been praised for being instrumental in bringing Terrebonne Parish its first fully adaptive park (one of only seven in the state) — proposed a new facility accompanied by a new program for people with disabilities.

Lambert shared that she takes her two special needs children to New Orleans on the weekends to participate in “Miracle League,” an organization designed to serve children who cannot be aided by traditional baseball, basketball and soccer leagues due to their special needs.

“You know if you have children or grandchildren that it’s not just a game they’re playing. It’s not just an activity they’re doing. They get so much more out of being on that team,” she said.

The league’s games take place at “Miracle Field,” built to accommodate its participants with walking devices or wheel-chairs. Lambert showed a rendering of what such a field would look like at Air Base Park, which will host the “Bayou Buddies” league — a combination of Terrebonne’s Buddy Ball league and the Miracle League for children and adults with physical and mental disabilities.

“It would be amazing to have a program like this in our own backyard. I’ve seen what it has done, not only for my children but for our family,” she said. “And I want every other special needs family in this parish — and even if those outside our parish choose to come — to feel what I feel. I want them to get joy to just sit back and watch their kids, to cheer them on, to see how they progress.”

Still a Ways to Go

“I want to wholeheartedly thank every single one of you guys. I know the amount of work you put into it; I know the amount of heart that you put into it. Terrebonne Parish owes you a debt of gratitude for the work you have done,” said Councilwoman Jessica Domangue, who spearheaded the initiative. “…This could potentially change the trajectory of Terrebonne Parish forever.”

LaRussa praised the committee members for their “dedication” and “hard work” over the last six months. “These 18 people with different personalities came together and actually put the time in,” he told the Times before the meeting. “Not everybody got what they wanted, but we agreed to compromise and came up with a recommendation to move our recreation into the future.”

Proponents of the recommendations are excited for the future of Terrebonne Parish Recreation, but there’s still a ways to go before the plans come to fruition. For instance, now that the council accepted the report, motions need to be made and documents must be drafted before the merger can reach voters. According to the board’s charter, outcomes that need voter approval have to be submitted to the council and finalized, with a goal of being placed on the October 9 ballot.

“This is not going to be done in two weeks. This is going to go to a subcommittee; this is going to go to legal. It’s a long, arduous process…Hopefully, we can expedite it,” said Councilman Daniel Babin, just before applauding Committee B’s findings. “And I will vote whenever it comes up to us to send to the voters for their answer on it.”

A more detailed report on the recommendations can be found here.